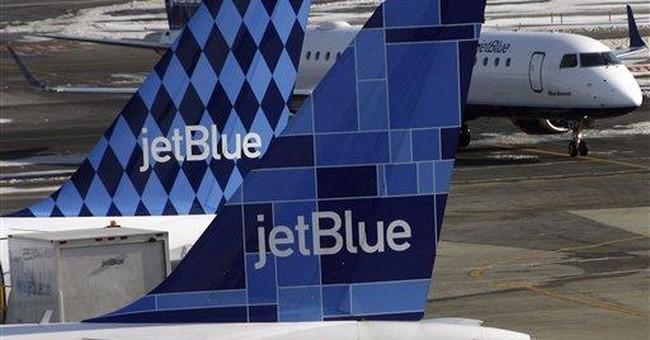 The Jet Blue CEO, in addition to accepting responsibility and issuing five days of apologies, has now come out with a bill of rights. Passengers if delayed so many hours are entitled to compensation. After so much time sitting on the runway the flight will be cancelled and passengers permitted to get off, etc. Jet Blue was absolutely right to do so. Some Wall Street observers complained that Jet Blue got on the map as a low-fare airline with good service. The bill of rights may cost the Airline money and thus the cost would be passed on to the consumer. But if Jet Blue and other airlines do not begin to regulate themselves they are asking for government regulation. In fact, the larger airlines are also considering a bill of rights. And the Air Transport Association, the lobby for most airlines, says it is working on a similar proposal.

But government regulation? Excuse me. That is how we got where we are now from thirty years ago. Fewer people could afford to fly then. Thanks to Senator Edward M. (Ted) Kennedy (D-MA), among others, airlines were deregulated. That caused established airlines to offer bargain fares in response to bargain-basement airlines which started up actually to be competitive. In one sense, any objective observation would yield the conclusion that deregulation worked. Millions more who never had a chance to fly now do so. Southwest Airlines proved an airline could offer low fares and earn a profit. Jet Blue was on its way to profitability as well until this spate of bad publicity, with passengers saying on network television news programs that they never will fly that airline again. Yet Jet Blue's quick response shows the reason why it ought to be given a second chance.

Last week I wish I had had a bill of rights. I arrived at Ronald Reagan Washington National Airport at 5:30 AM to fly to Atlanta as part of my work as a Commissioner on the Surface Transportation Study and Revenue Commission. I understand I must obtain special consideration because I am in a wheelchair and I hear that many people hide things in wheelchairs these days. After one inspection I was taken to a special area. There I was told that the Airline had mandated that I be inspected a second time. Believe me, that second time saw me treated as a criminal. Fine, of course I got through it despite being patted down over every inch of my body, having to remove certain items of clothing and having my wheelchair almost dismembered. If it were true that it was the Airline that mandated a second inspection for me that airline would have been US Airways. I'd like a bill of rights that I be treated decently, even though the inspections are authorized by the Federal Government.

My colleague Eric M. Licht and I got to the gate in time to hear that our flight was cancelled, no reason given. There I'd like a bill of rights as well. We were told to go to Delta. Eric specifically asked if we needed a voucher or something from US Airways to give to Delta. He asked more than once. We were told we did not. So we got to the Delta ticket counter and the helpful clerk said she was sorry but all we had were boarding passes and we needed tickets. So Eric had to go to the US Airways counter. He got them but we missed the 7:00 AM flight by four minutes. The clerk said she didn't want to but she had to close out the aircraft. Four minutes! Had we been told where to go correctly in the first place we would have made it on time. By the way, the helpful clerk at Delta told us that hardly a day goes by that US Airways doesn't send people without tickets to that counter. Our stories were at least believable.

So we were booked on an 8:00 AM Delta flight. The helpful lady gave us three-across seating so we were not crowded. When we got to Atlanta Delta promptly put me on a small transfer wheelchair and wheeled me outside the aircraft. Two fellows were bringing my electric wheelchair. They sat me on it and we were on our way. There we were met by officials of MARTA, the Metropolitan Atlanta Rapid Transit Authority, who were in charge of us for the remainder of the day. The highlight of my day was our visit to the Arnold railroad yards and shops where 106 rail cars can be handled at one time. My colleague was shown a car rebuilt at the shops one year ago. It was 26 years old. It was indistinguishable from a brand new car to which it was coupled - impressive work inside and outside of the Arnold shops.

It was time to return to Washington. Our flight was after 6:30 PM. US Airways loaded us on a four-seater-wide jet which seemed to seat around 50 people. Actually it was better for us, more space. We arrived in Washington pretty much on time although we had to wait a bit to use our gate. Unlike Delta in Atlanta, we were kept waiting for 40 minutes before being placed on a transfer wheelchair.

Even when we got off the plane and were sitting in the cold, no one could tell us where my own wheelchair was. When I saw it coming from a distance, something looked wrong but I didn't give it much thought until the wheelchair was delivered. Someone had dismantled all of the electrical wiring. Why this would be done is beyond my thinking. We kept asking for answers. Unfortunately none was forthcoming. Again, I wish I had a bill of rights. Finally my son Peter, who waited to pick me up and was circling the Airport, was called to park the car and to return to baggage claim. He did so and while he is proficient in the operation of some aspects of the electric wheelchair they had broken it beyond his capability to repair. A couple of nice young men accompanied us. They were full of apologies but they had no idea what happened. Despite their calling for help, they were not about to get any explanation.

Finally, Peter had to dislodge the gears and push me as if it were a regular wheelchair. It was difficult getting up the ramp of my van but one of the young men helped. When we got to my home, Peter had to get the wheelchair down the ramp with me in it all the way downstairs via my elevator. Then he had to transfer me from that wheelchair to an old one which barely works. The next day he took the wheelchair to the repair shop from which we had purchased it. The repairmen were not easily able to fix it and had to take some hours to figure out what was wrong.

The young men who accompanied us to baggage claim with my wheelchair said the airline would take care of costs associated with the broken wheelchair. I don't doubt them but they were not able to present any piece of paper to back up their assertion. Again, it would have been nice to have had a bill of rights.

The previous time I flew I was left without my wheelchair having been delivered. The crews and the cleaning people all left. Of course, the folks waiting for me no longer can come to the gate. They were left at the beginning of the secure area without anyone to tell them what happened to me. The airline forbade me to use my cellular to telephone them. A kindly stewardess took pity on me and on her own went to baggage claim and found the wheelchair and flagged down two employees to deliver it. However, the wheels had been disengaged and no one, myself included, knew what to do. The Lord provided. A pilot for another flight wandered by. His mother had a similar chair. He knew what to do. Now I do know but it was very troubling when I didn't know what was happening.

The bill of rights, it seems to me, would be better to have a special handicapped section composed by handicapped folks. And I don't mean those who ask for the moon. I mean reasonable people. My point in telling my own story is simply this. If airlines would handle these problems themselves the problems largely would go away. If not, and they are re-regulated by the Federal Government, it would be tragic for the airline industry and for the nation as well. If that happens they will have only themselves to blame.