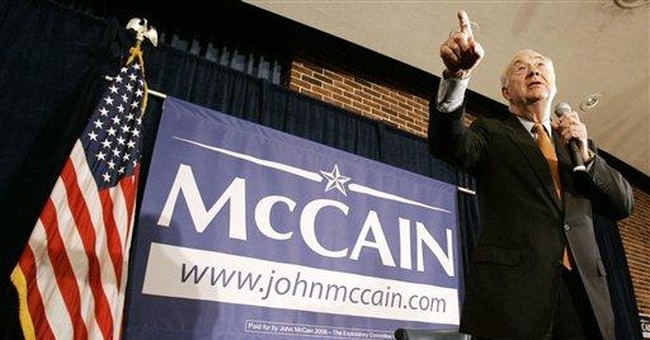 Years ago there was a musical entitled "Stop the World. I Want to Get Off." That is how I feel about the much accelerated campaign for the Presidency. It has begun much too early and now it would appear that California and several other States are hell-bent to accelerate their primaries to a date either coinciding with New Hampshire's first-in-the-nation primary or at least the week after that of New Hampshire.

All of this is a terrible mistake. We want the American public informed about what is at stake in the election. When it begins two years ahead of the actual vote there is an excellent chance that the public will tune out and pay no attention once the nominees are selected.

Time was that the campaigns would begin the first of the election year. The Iowa Caucuses are comparatively new. Jimmy Carter was the first candidate to campaign for caucus votes. He won Iowa and that gave his little known candidacy a real boost. The New Hampshire Primary has been for much of the 20th Century the earliest primary. There followed primaries and caucuses all the way through California, which held its primary the first week in June.

Do you know what that did? It tested the mettle of the candidates. When Senator Edmund S. Muskie (D-ME) cried in New Hampshire it cost him the nomination. Before that he was considered the odds-on favorite to defeat President Richard M. Nixon for re-election.

Just think of the last election. Former Vermont Governor Howard P. Dean, III was endorsed by many important political figures, including former Vice President Albert A. (Al) Gore Jr. Dean raised and spent more money at the beginning of a campaign than anyone had seen before. He did this largely through the Internet.

The Iowa Caucuses caused Dean a problem. Still, the conventional wisdom was that he would be the nominee. To encourage his supporters Dean gave that famous speech articulating all of the places he intended to contest and then came out with a roar at the end that must have been played 500 times by the traditional and the alternative news media. Howard Dean was done. Yet, if the other candidates had dropped out and Dean were the only candidate to contest in California we might have had an entirely different outcome in 2004.

In 1964 Senator Barry M. Goldwater (R-AZ) was not assured of winning the Republican nomination for President until he defeated Governor Nelson A. Rockefeller (R-NY) in the California Primary in early June. As to New Hampshire, veteran Senator Norris Cotton (R-NH) went all out for Goldwater that year. Yet Goldwater lost New Hampshire.

In 1992 Pat Buchanan made a strong showing in New Hampshire but did not get the GOP nomination. What if Buchanan had won and all the other key primary States were bunched up afterward? He might have gone on to win because George Herbert Walker Bush might not have been able to recover that fast.

With Iowa and New Hampshire at the beginning of the primary process and California at the end, with important States such as South Carolina, Wisconsin and Michigan in the middle, the spread demonstrated the staying power or lack of it of candidates of both parties. In 1992 Governor Bill Clinton (D-AK) was behind. He hung on in New Hampshire and picked up steam and delegates as he went along. Compared with the other Democratic candidates that year Clinton was by far the best but he needed time to demonstrate that.

That year Senator Paul Tsongas (D-MA) won New Hampshire. Supposing the primaries were all bunched together as is now proposed. Tsongas might well have won the others as well, given the hype a candidate gets from winning New Hampshire.

What is the rush now? I know the Democrats are certain they are going to win not only the Presidency in 2008 but greatly increase their margins in the House and Senate as well. Somehow, they believe it is to their advantage to have the nomination determined at least six months before the nominating conventions. Republicans seem to be going along with this game. Why? A large portion of the public would like to see other candidates run as opposed to those with whom they are familiar. Rightly so. A Governor Bill Richardson of New Mexico, who portrays himself as a more moderate Democrat who get things done, would have no chance if the primaries were bunched together --- the same for Iowa's former Governor Thomas Vilsak. Likewise candidates such as former Governors Tommy Thompson (R-WI) or Mike Huckabee (R-AK) or Senator Sam Brownback (R-KS) are all credible. They will have no chance if the primaries are bunched together and perhaps former New York Mayor Rudy Giuliani or Senator John S. McCain, III (R-AZ) wins New Hampshire. There will be little chance for any of the others to prevail under those circumstances.

So here is where the nation finds itself. Instead of spending the Presidential election year of 2008 figuring out who the nominees of both parties shall be it seems that will be determined this year instead. It is not the people who are making that determination. The media appears to be running the campaigns on both sides. If by the end of this year it is clear who will be the nominees then the bunched-up primaries become a mere formality. They merely ratify what the media has determined.

Already President George W. Bush is being pronounced a lame duck by the major networks. They point to the fact that the Democrats in Congress may well enact legislation cutting off funds for the wars, especially the war in Iraq. What somehow is forgotten in that discussion is the fact that President Bush can veto any such measure. Yes, there are Republican defections on the nonbinding resolution condemning the surge. But there are not sufficient defections to override a veto in either House. I don't know for sure, but I would not be surprised if the President's advisors didn't welcome this turn of events. It may give him a chance to show that he is anything but a lame duck.

One also wonders what President Bush and his advisors think of the developing political situation. They must know that there is a chance that they would not be occupying the White House today if the system of early primaries had been in place in 2000.

As regular readers of this commentary know, I think we would be better off with the sort of short and focused campaigns as in Canada, for example. The parties have changed hands a number of times despite the focused election. Canadians pay greater attention to who is to be elected when the time comes. In our case we have a bad case of overkill.