The Speaker of the House -- Her 747 request and competing publicity 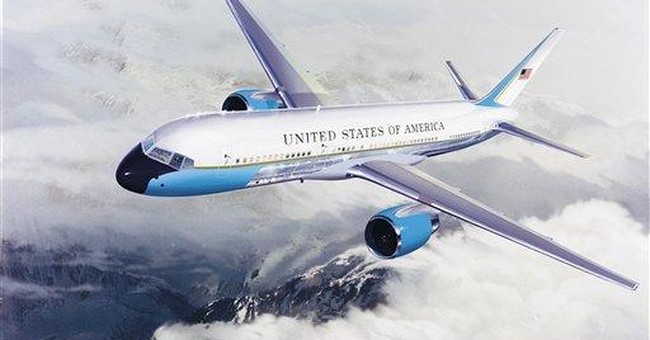 I'm not sure which woman was the more relieved by Anna Nicole Smith's untimely death. Is it the star of "Lust in Space," home in Houston, or is it the Speaker of the House? Last week both women had front page coverage but less than that of the late Ms. Smith. Inasmuch as I have no idea what would cause a successful woman to do what this astronaut charged with attempted murder did, I have no comment on that story. But the Speaker of the House? That is something about which I know a bit. So now that neither woman is the top story of the hour, let's deal with the Speaker.

Before 9/11 former Speaker J. Dennis Hastert (R-IL) always flew on commercial aircraft when returning to Illinois. After 9/11 the Secret Service approached him and suggested, since he was two heartbeats from the Presidency, that he should fly on a military aircraft. The Pentagon gave him a 12-seater which has the capability of making it all the way to the West Coast without refueling. That was big enough for Hastert, his Chief of Staff, Scott Palmer, and a few others to fly with him. Most of the time he was flying to or from his home in Illinois.

How about Speaker Nancy Pelosi (D-CA)? THE WASHINGTON TIMES broke the story that the Speaker was demanding a 747 with seating for 40, a middle compartment with a bed and a desk for, in this case, whoever is the host. This is known as Air Force II. It is the plane the Vice President uses for his trips. I flew on Air Force II. It is one comfortable outfit. The front of the plane is reserved for the elite on the trip. In my case it was the Vice President and his wife. The middle section can be used for children, for example. Then there is the "coach" section. In our case we had 70 staffers, speechwriters and reporters with us.

Given that Ms. Pelosi is two heartbeats from the Presidency, I felt perhaps her request was not unreasonable. That is, until I learned the following: the plane former Speaker Hastert used is capable of flying 3,700 nautical miles without refueling. That is well beyond the requirement for a San Francisco to Washington D.C flight. No, that wasn't good enough. She wanted the larger aircraft. Then I learned that the Speaker had sought a change in the rules that govern such trips. If anyone other than a spouse rides along he must pay commercial rates. She wanted an exemption so she could take grandchildren and a larger staff and maybe even lobbyists or financial contributors.

Even so, I still thought she ought to be left alone until her pal Representative John P. Murtha (D-PA), Chairman of the Defense Appropriations Subcommittee, in effect ordered the Air Force to supply that plane or else. He went on to say that anyone who opposed the Speaker's request was sexist. Bingo. Now I was angry, along with millions of others who heard the full story. For such a smart woman, how could she be so dumb? The beat goes on. Ms. Pelosi took to the House Floor to say she never asked for a larger plane. Many in the Air Force knew otherwise and called or e-mailed local media outlets to say so. She wasn't content with denying what she had done. Her people attacked the messenger for breaking the story. THE WASHINGTON TIMES, you see, is right-wing trash. Just to top things off, she now blames former Secretary of Defense Donald Rumsfeld for leaking the information. Poor Rumsfeld. He has been out of office for months but he still gets charged anyway.

This story is bad for the new Speaker in a number of ways. First, everyone who reads or hears can understand the story. Second, defeated Republicans actually got coverage attacking her for this. Third, because she promised to sweep the Congress clean and do away with the "culture of corruption," this appeared to be hypocritical on her part. And old Jack Murtha, once a great friend of the military, had no business threatening the Air Force over this issue. Shouldn't Murtha be swept away, too? Isn't what he did part of the "culture of corruption?"

By the way, Pelosi and her husband are zillionaires. She could afford to buy a plane and hire crew to pilot it. And while she preaches against the pollution that SUVs create, in taking that private plane she would be polluting more in a single roundtrip than most of us will pollute in a lifetime. It is the old "do as I say, not as I do" routine.

The reason most criticism of extremely bloated spending and other problems with what Washington does doesn't register is because the public has no idea what is being talked about. I guarantee you, almost no one on planet earth has any idea what a billion dollars is. When we speak of a budget which is two trillion, 900 million dollars, there is absolutely no one, even bankers, who understands trillions.

The interesting thing about the Pelosi story is that it was understood. It is the kind of story the media loves to cover. One of the shrewdest politicians in my lifetime who understood the kind of stories the media would cover was the late Senator William Proxmire (D-WI). Proxmire invented the "Golden Fleece" Award. Every month he would choose some absurdity of the federal budget and hold it up to ridicule while the camera buzzed on. I checked on his voting record. He voted for most of the spending in bills in which there were items he opposed. No one caught on to that. He was thought of as an honest man. In 1964, Proxmire was running for re-election. He had come to the Senate due to a split in the conservative vote causing him to win a special election for the seat of the late Senator Joseph R. McCarthy (R-WI). A farmer from Sun Prairie, Wisconsin, named Wilbur Renk almost defeated Proxmire, condemning him for profligate spending. Had it not been for the fact that Lyndon B. Johnson was winning the State of Wisconsin by a million votes Renk otherwise might have made it. As it was, he reduced Proxmire's margin to under 50,000 votes. Voting machines malfunctioned for a time and for a few hours it looked as if Renk would defeat Proxmire. After that, Proxmire invented the Golden Fleece project. He knew voters didn't understand big spending projects. So he attacked what would be understood. The result was from 1970 until he retired in 1989 he ran virtually unopposed. He would spend $2,000 on his statewide elections. That cost was simply to hand out a two-page brochure touting his accomplishments. He never missed a Packers or a Braves (and later Brewers) game. He would stand near the front gate of these stadiums and shake hands with voters. My father-in-law bragged that he had shaken Proxmire's hands almost ten times. Proxmire connected with voters. They all loved the Golden Fleece Award. Guys on the factory floor would exchange what they knew of the latest "golden fleece."

If the Republicans can learn to speak in the language people understand they might make it back. They need to look for the potential stories of the 747 demanded by the Speaker. They score when voters understand. Forget railing against trillions and find the $100 toilet seat and the public will really think you've done something.