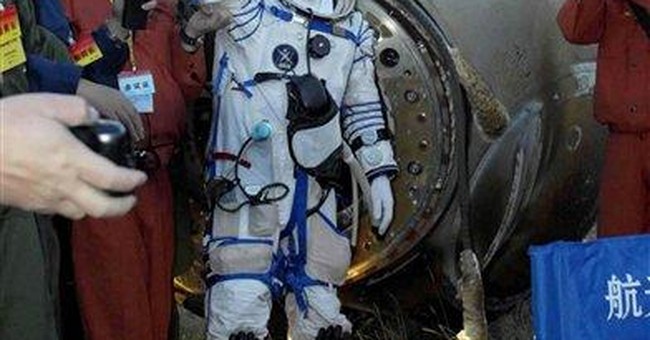 We are in the midst of a new space race. This race, unlike the last, is one that usually is ignored - or derided - by the news media. Unlike the last, this one is deadly serious. It involves much higher stakes than putting a man on the moon. We can only pray that our politicians and the public will summon the will to prevail. Losing it would bring severe consequences.

THE WASHINGTON TIMES reported last week, "China and Russia are developing space weapons and are among several nations working on systems to threaten U.S. satellites with lasers or missiles." This story by TIMES reporter Bill Gertz was based upon testimony offered on January 11, 2007 by Army Lieutenant General Michael D. Maples, Director, Defense Intelligence Agency, before a Senate Select Committee on Intelligence hearing on "Current and Projected National Security Threats to the United States."

Here is the printed testimony of what Maples said:

Russia and China continue to be the primary states of concern regarding military space and counter-space programs. However, as the availability of space technology and services continues to increase, other nations already possessing capabilities in key areas will acquire military and commercial space-based assets.

Several countries continue to develop capabilities that have the potential to threaten U.S. space assets, and some have already deployed systems with inherent anti-satellite capabilities, such as satellite-tracking laser-range finding devices and nuclear-armed ballistic missiles. A few countries are seeking improved space object tracking and kinetic or directed energy weapons capabilities."

Maples made the point that developing such technologies would be financially exorbitant. Other countries were embarked on the less costly or less technologically complex capabilities of signal jamming, electronic warfare, and denial and deception.

Credit President George W. Bush and the Administration for shoring up America's defenses by developing the Strategic Defense Initiative (SDI). Some key conservatives in Congress are even more gung-ho on behalf of SDI. Not so the new leadership in Congress. House Speaker Nancy Pelosi (D-CA) received a 91% rating from liberal Peace PAC for 2003-2004, the latest available. Peace PACs sister organization, the Council for a Livable World (CLW), assigns Majority Leader Harry M. Reid (D-NV) a 75% rating for 2004-2006.

Can we be so fortunate with a new Congress with a very different outlook?

What will happen if this new Congress decided to scuttle space-based defense programs? What if more legislators are elected in the next elections who harbor similar antipathies to SDI? Or an anti-SDI President is elected next year? The thought is distressing. At worst our country will be caught unprepared to handle the latest challenges of warfare. At least we probably will have lost valuable time that could have been spent perfecting and deploying effective SDI systems such as "Brilliant Pebbles."

When the Communists captured control of China a cry was heard in American politics: "Who lost China?" Now, with countries such as China racing to create new space weapons, the question might one day be asked by Americans, "Who lost space?" The failure of key political leaders, such as Pelosi and Reed, to take seriously SDI increases the odds that one day that question will be asked. Today's science-fiction nightmare soon might become tomorrow's reality. The antidote is simple: an aroused citizenry that demands America's Federal elected officials do their foremost job -- tending to the national security concerns of our country. American know-how won the last space race. In this age where other countries are more capable technologically we cannot become complacent. Better to take the vital preventive steps now - perfecting and deploying SDI - than losing thousands, even millions, of American lives because our politicians left our country unprepared.