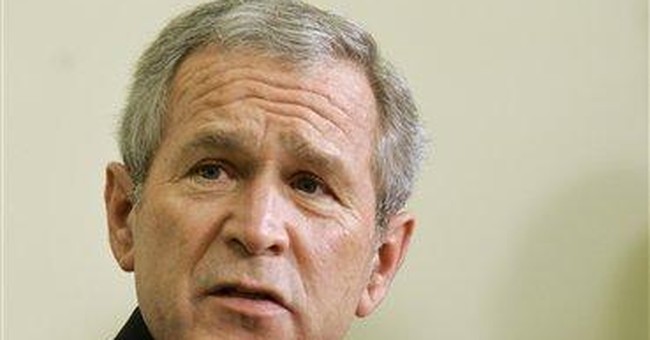 Last week, along with millions of Americans, I watched President George W. Bush deliver his address to the nation. The President is proposing that an additional 20,000 troops be deployed to Iraq in order to quell the violence, especially around Baghdad.

I don't know what the reaction of others has been. I know what mine was. I was sad. The President seemed alone. Indeed, the next day almost all Democrats and some Republicans ripped the President's policies to shreds. A Washington area radio station, which carries conservative commentators, for most of the day conducted a telephone poll. Anything conservative usually gets thumbs-up from that audience. Not a single caller for several hours thought that the President had scored a touchdown. The best his friends would give him was a field goal.

President Bush almost stands alone. Only a single Democrat in the Senate, Joseph I. Lieberman (D-CT), is with him and at least five Republicans oppose him. That means opposition to escalation of the war might be successful.

In the House of Representatives President Bush has greater support. The Democrats, with their 30-vote margin, may be able to do as they wish. Of course, there are Democrats who ran to the right of Republicans and claimed they were tough on defense. Now where are they? Probably hiding under the cloak of public opinion. The President has dropped to a new low of 32% favorable in one major survey. Lest Congress gloat, Congress also was at an all-time low of 32%.

The question I have is how do the Democrats want to carry their opposition to Bush's escalation. If they don't watch out they will own the war.

Senator Joseph P. Biden, Jr. (D-DE) whines that the Constitution prohibits the Congress from doing anything about Bush policies. Biden came to the Senate in 1973. Surely he must remember, and no doubt voted for, measures to cut off funds for the Vietnam War. Congress has the power of the purse. It can cut off funds at any time. Of course, if Congress did that Members would need to answer charges that they are hurting American and Coalition troops.

The problem for the Democratic leadership is its left wing. This past week many anti-war rallies were held across the nation.

Speaker after speaker reminded the Queen for a Day, Speaker Nancy Pelosi (D-CA), and her counterpart in the Senate, Harry M. Reid (D-NV), that the Democrats won because of their position against the war. That is not entirely true but by the time the media and the liberals finish with it voters will think it is true. Today's voter is so much more sophisticated than voters decades ago. There is talk-radio to inform them and to hear from a variety of opinions; there is the Internet, which provides information in just seconds; there is C-SPAN, where voters can see for themselves what is happening in the Congress. The Democratic leadership no longer can get by with pawning off a "sense of Congress" resolution as having any real effect.

Democrats under the Ford Presidency stopped the Administration from funding the anti-Communist rebels in Angola. President Gerald R. Ford could have vetoed that bill but he did not. There were enough Democrats that the veto probably could have been overridden. This President is in better shape in that regard. He likely has enough votes to sustain a veto in both Houses of Congress and certainly at least in one.

Currently the Democrats are trying to figure out what to do with their majorities. In the House the Democratic Leadership can pass almost anything. Same for the Republican Leadership in the last Congress. In fact, the margins in the House were remarkably similar. But in the Senate Reid has a one-vote margin. And one of those votes is trying to recover from a stroke. Senator Tim Johnson (D-SD) is recovering well. He has been removed from the intensive-care unit and he has begun to talk. However, with the physical therapy facing Johnson it may be many months until he returns to work as a functioning legislator. So for practical party-line issues Reid presently has only 50 votes and it takes 41 votes to organize a filibuster.

Senator Mitch McConnell (R-KY) has indicated that he will organize a filibuster if there is a push to cut off funds for Iraq. If he does he would let the President off the hook. Actually this might be a bluff on McConnell's part. With defectors such as Senator Norm Coleman (R-MN), usually an Administration stalwart, the Senate Republican Leader must worry if he put together 41 votes whether he could keep them together.

Getting back to President Bush, one thing is clear. The man believes what he is doing in Iraq is absolutely the right thing. He has staked his Presidency on the Iraqi War. I also would say his legacy will be determined by what happens in Iraq. If Bush is given a free hand and I am inclined to believe the Democrats will give it to him, if only to avoid ownership of the Iraqi War, then clearly the decision would be his and his alone. I mentioned I was sad as I watched President Bush because he seemed diminished in stature. His body language was not bold as it has been in the past. As to the left-wingers of the Democratic Party, Nancy and Harry had best kiss them goodbye until after the 2008 elections. If they win those elections they will be able to do as they wish. On the other hand, if the left pushes the Democrats into owning the Iraqi War and along with it is perceived harm for the troops, then a Democratic Congress is likely for the 110th Congress.

I have a good line Nancy and Harry can use when speaking to their left wing. They should tell the leftists, "You have no place else to go" except us. That is the line I heard over and over again, beginning with the Nixon Administration. As one by one cherished Constitutional principles were tossed aside by Republican President after Republican President and we on the right complained, we were asked over and over, "Where else do you have to go?" No skin off my nose since I despise the political left in this country and blame the leftists for much that has gone wrong. But I will say it regardless. The moment they became an appendage of the Democratic Party is the moment they lost leverage and real power. Now the ruling Democrats can kiss them off. Why? Because the ruling Democrats' only real agenda is to stay in power. Should sentiment in the country be such that the public really would turn against the War, then and only then would the Democratic Leadership fully satisfy the left wing. If sentiment remains where it now appears to be the Democratic Congressional Leadership well may run the risk of cutting off money to get the troops home.