Lessons from Reagan for Bush and the War on Terror 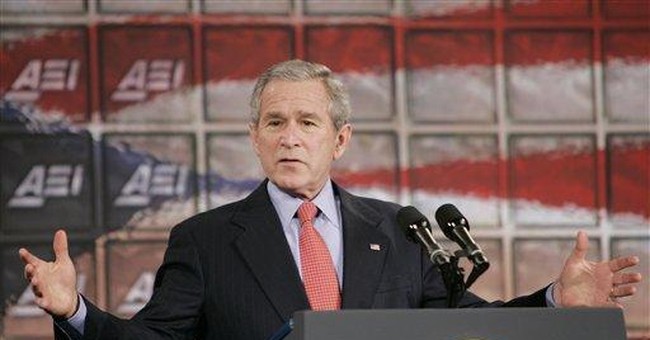 Because of a bitter, increasingly costly war in Iraq, Americans are questioning their president’s leadership more than ever before, and George W. Bush has watched his approval ratings plummet to all-time lows.

Such challenging times were no stranger to past presidents—including three born in this month when America honors Presidents Day: Washington and Lincoln led their nation to victory in wars that threatened to rip apart their country; similarly, another president who sought to lead America to victory in a difficult war likewise persevered—Ronald Reagan.

It was Reagan’s victory over Soviet communism that won him the accolades he now receives, and which has earned him the level of gold standard by which Republicans measure George W. Bush. A December Gallup poll found that Reagan is the most popular modern president, with 64% of respondents judging him outstanding/above average and only 10% rating him below average/poor, far outpacing Bush, who rated the most unpopular. An extraordinary June 2005 survey by the Discovery Channel and AOL, which included 2.4 million participants, declared Reagan the “greatest American of all time,” beating Lincoln and Washington.

Actually, Reagan has been rating this high for a decade. A long list of top scholars—most of which never voted for Reagan—rate the 40th president highly: Harvard’s late Richard Neustadt, Yale’s John Lewis Gaddis, popular historians Michael Beschloss and David McCullough, to name a few. Even liberal politicians, from Bill Clinton to Ted Kennedy, now praise Reagan. Reagan “will be honored as the president who won the Cold War,” explains Kennedy.

And it is Reagan’s Cold War triumph that offers parallels for George W. Bush’s struggles in the War on Terror.

This is the first of four articles noting lessons for Bush from Reagan’s experience. But before considering tips from Reagan, we need to appreciate some significant differences in the two presidents—and some key lessons for Bush’s detractors:

Obviously, Bush lacks Reagan’s communication skills and ability to disarm political opponents with gentle wit. This has enabled his opponents to define public perception of his handling of the war, in a way Reagan’s critics could not. Bush simply does not have Reagan’s primetime television charm, and ability to appeal to Americans in Reagan’s persuasive, winsome manner.

That said, comparisons between the two presidents are often unfair because of vastly divergent circumstances:

The Soviets did not directly attack us, as did the terrorists; we never engaged the USSR in a hot war. Also, because the Soviets embraced an atheistic ideology, they feared death, not believing in eternal rewards. Quite the contrary, the radical Islamic enemy views death in the name of Allah as a ticket to Paradise. For Bush, that is a more dangerous enemy—one that cannot be permitted to acquire nuclear weapons.

On the other hand, there are key common positives in Bush and Reagan:

Both had a deep faith in God, in country, and in their visions for America and the world. Their self-confidence gave them remarkable perseverance in the face of harsh criticism—criticism we have conveniently forgotten in Reagan’s case. At this point in Reagan’s two-term presidency, he was at an all-time low because of the emergence of Iran-Contra. Also, on the rare occasion he used military force, Reagan likewise encountered strong international disapproval. When Reagan dispatched troops to Grenada, the vote at the U.N. Security Council was 11 to 1 against the United States, while the General Assembly vote was 108 to 9.

More, even Republicans have failed to grasp the most important shared objective of the two presidents: Bush has stated explicitly that he is seeking to carry on Reagan’s “March of Freedom,” a march begun centuries ago, not months ago—and which conservatives saluted when Reagan announced the goal in his historic 1982 Westminster Address. Against great odds, the current Republican president is attempting to shift Reagan’s March of Freedom to that one area where it has been most resistant but is most needed—the Middle East.

This is not to say that Ronald Reagan would have supported the decision to invade Iraq. That is impossible to know. At the least, however, Reagan would commend Bush’s goal of expanding freedom, and—ever the optimist—would likely be hopeful.

Yet, what are the lessons for Bush from Reagan?

Reagan found non-militaristic means to defeat the enemy, from extremely bold forms of economic warfare to other methods, such as aiding forces resisting the Soviets on various fronts. Reagan was able to marshal a multitude of resources that enabled him to pull off what no one 10 years earlier judged possible: he defeated the Soviet Union and won the Cold War without expending thousands of American lives. George W. Bush has lost thousands of precious lives and, in the process, has not been able to convince America that victory is in sight.

The next three articles in this series will examine three cases where Reagan defeated the enemy without firing a shot.