How long will the impossible really take? 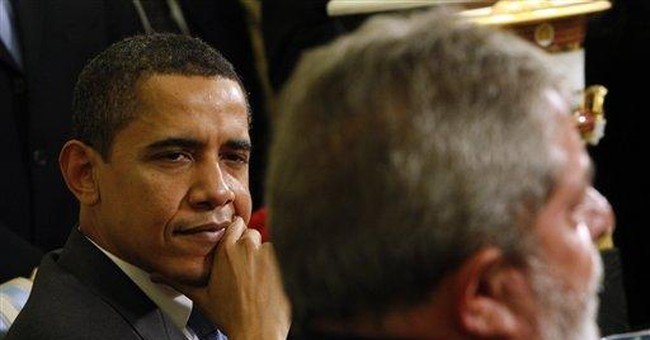 “Nothing is impossible,” says Hugo Chavéz.

Venezuelan President Chavéz is wrong, of course. Not only are some imagined things not possible, his dream of socialism is one of them.

That is, the idea that government can run everything and that the people will remain happy and free . . . that’s an impossible notion. Socialism kicks out all the mechanisms we have to calculate economic value. That’s why socialism, after umpteen tries, has consistently proven it cannot deliver the goods in a large consumer economy — not without reintroducing markets by the back door, like Lenin did. And then faking it.

Chavéz said this in a context. He was entreating our president to join him “on the road to socialism.”

But if you ask increasing numbers of critics and conservatives and just plain ordinary folks, President Obama has already embarked on the path to socialism. So Hugo Rafael Chavéz Frías’s beseeching of Barack Hussein Obama seems like making icing for a cake already in the mouth.

I’m going out on a limb here. I don’t think Obama wants to go all the way.

Sure, Obama wants more government: more spending, more programs, more regulation. He is certainly willing to risk more debt to “get us out” of the current calamity (of, amusingly, too much bad debt). And he plans to fiddle with the tax code, to make it “more equitable.” But does this show a high-mindedness, or is he merely trying to buy off a different (and larger) sector of the electorate than George Walker Bush was buying off with his tax code fiddlings?

Barack Obama is a politician. He thinks like one. He is always aware of how governments can reward special blocs of voters and donors.

But, many say, our beloved president was once a Marxist. He was a campus radical. His father was a Marxist. Blah blah, and more blah. This all may be true. But people do grow up. Politicians are rewarded in America; Marxists are not (except, of course, on college campuses). So I’m not going to pretend that Barack Obama’s any more of a socialist than FDR was.

And FDR was no socialist. He was merely the worst corporatist in American history.

I could be wrong. Chavéz could be right. It is not impossible that Obama is a closet socialist.

But I give the man some credit. He has said that markets are important for American life. I think he means it. He’s not a complete lunatic. He’s not Chavéz.

But he’s no levelheaded savant, either.

Socialism doesn’t work, but neither does Big Government. And it is this wisdom that Barack Obama and the Democratic Party resist with whole heart: The Welfare State, too, is an impossible dream.

In this way it’s an awful lot like socialism. Dreaming of a socialist utopia may be all about “equality” and “worker participation,” but in practice it requires abandoning all constitutional limits and notions of individual liberty.

Dreaming the welfare state idea amounts, in reality, to setting up one big free-for-all that grinds us down.

The welfare state idea is this: Take (via taxes and inflation and regulation and direct confiscation) from the wealthier members and give that wealth to the poorer off. The idea is that this transfer makes us “all better off.”

On some level, this makes sense to a lot of people. But the scheme can only “work” as long as only the rich are skimmed off of, and only the poorest are subsidized. Yet that proves politically impossible. Sooner or later — usually right from the get-go — it devolves into what has been called “the churning state.” In this form of governance and economy, wealth continually gets redistributed from the politically powerless to the politically powerful.

And that’s what we have now. Our government doesn’t just give to the poor. It gives to the middle-class. And it gives to the rich.

Under the recent bailouts — bailouts that Bush started and Obama outmatches, idiotically enough — the rich are getting more bennies than ever. But Obama expands the notion, trying to spread the “save the rich” program to other classes, too. Classes more likely to vote for him in three and a half years.

Yes, it all comes back to the chaotic mix of the mixed economy, where policy shifts as alliances and power shift, where politics-as-usual spins on like a kaleidoscope set to turn by hamster wheel.

Obama, like too many politicians, is mesmerized by the bright, shining lights of the churning state, as seen from the hamster wheel of Washington, D.C.

It may look like socialism, sure. And it will certainly get more “socialistic,” in the sense that government will creep into more and more of our lives.

But it is not really in any way different from what has been going on since the first Roosevelt administration, and before, with Hoover’s activist response to the Great Depression.

It was absurd then, it is absurd now. But it is what we have.

Is it the road to socialism? Not according to Chavéz, who means business when he talks revolution. In the very same week, Chavéz stepped up his totalitarian thuggishness and suppression of the press.

Bullying people in the name of “the people” may be required to get them moving down the road to socialism, but it tips the hand: Socialism offers neither peace nor freedom. It leaves you with too many bullies and too many victims. It’s no way to live.

The churning state road to increasing government is not revolutionary in Chavéz’s sense.

It’s only revolutionary in the “hamster wheel” sense.

But both systems are illusory. Some dreams are impossible.

You can’t make everybody better off by taking from everybody and shoving that wealth through the political and bureaucratic classes and bottlenecks, and expect to get out more than you put in.

And you can’t make everybody better off by . . . uh, remind me, did I just describe socialism, or what we have now?