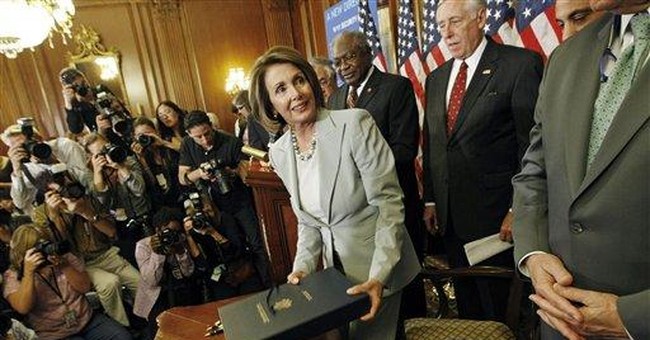 President Bush and Congress just agreed to borrow $700 billion to bailout insolvent financial firms. Your share in this wager is $2,292.60. For a family of four that comes to $9,170.40

And you didn’t get to vote on it.

If you’re unhappy about that, you get to choose from two major party candidates for president who both voted for the bailout. (All the minor party and independent candidates, both left and right, were against the bailout.)

Compare our federal dysfunction to the menu of real choices awaiting voters at the state and local level — especially in the 24 states that enjoy a process of initiative and referendum.

Here’s my list of the Top 10 issues on state ballots this November:

10. Washington State I-985, The Reduce Traffic Congestion Initiative. The Seattle area is home to some the nation’s most horrendous traffic. This initiative promises to kick out those jams by requiring synchronized traffic lights, opening up high-occupancy-vehicle lanes and mandating a higher proportion of current funds be spent to reduce road congestion.

The measure is promoted by the state’s leading initiative activist, Tim Eyman, who has passed eight initiatives in the last ten years — to enact tax cuts, spending restraints and produce performance audits of government. I-985 is ahead in early polling. If it passes and succeeds in easing gridlock, frustrated commuters in other initiative states will want to travel this same route.

9. Colorado Amendment 46, Civil Rights Initiative. Ward Connerly’s efforts to end racial and gender preferences — so-called “affirmative action” programs — have been fiercely fought. Yet, the measures have won in every state where voters have gotten to choose: California, Michigan and Washington. Though campaigns of harassment against petitioners in Arizona, Missouri and Oklahoma helped block the idea from gaining a spot on those state ballots, the issue will be voted on in Colorado and Nebraska. It is expected to pass in both states.

8. California Proposition 4, Abortion Waiting Period and Parental Notification. Prop 4 requires a minor to wait 48 hours after a physician notifies a parent – or in the case of alleged parental abuse, an adult relative – before an abortion can be performed. Similar measures in 2005 and 2006 failed, but those initiatives lacked the alternative of notifying a relative rather than a parent. The third time may be a charm — a recent Field Poll shows the measure narrowly ahead.

Abortion is also at issue in Colorado, with Amendment 48, which defines “personhood” as beginning at “the moment of fertilization,” and in South Dakota, with Initiated Measure 11, a ban on all abortions, except in the case of rape, incest or a threat to the mother’s life.

7. Massachusetts Ballot Question 2, The Sensible Marijuana Policy Initiative. This measure would make the possession of less than an ounce of marijuana a civil offense, punishable by a $100 fine, rather than a criminal offense. In an interesting twist, it appears that 11 district attorneys broke Massachusetts campaign finance laws by spending money against this measure before forming their Coalition to Save Our Streets. Campaign finance laws are so byzantine that even the DAs can’t follow them.

Michigan voters will decide Proposal 1, a measure to permit the medicinal use of marijuana, and Californians face Prop 5, the Nonviolent Offender Rehabilitation Act, which would move the state even further toward a policy of treatment, rather than incarceration, for drug offenses.

6. Arkansas Proposed Initiated Act 1, Unmarried Couple Adoption Ban. This statutory measure bans unmarried couples from adopting children or serving as foster parents. State government policy had restricted same-sex couples from becoming adoptive or foster parents, until the policy was challenged by the ACLU and overturned. This initiative would set a broader state policy whereby no unmarried couples – heterosexual or homosexual – could adopt children or be foster parents.

If it passes, it is likely to be repeated in other states. If it fails, along with likely failures of same-sex marriage bans in California and elsewhere, sexual orientation politics may begin a new chapter.

Arizona’s Proposition 102 currently leads in the polls, but is relatively close. It’s similar to Proposition 107, which in 2006 became the first same-sex marriage ban to be defeated by voters in any state. But Proposition 102, unlike its predecessor, doesn’t prohibit domestic partnerships or civil unions. Marriage amendments also face tough tests in California, where Prop 8 is far behind, in part due to a controversial ballot title by Attorney General Jerry Brown, and in Florida, where Amendment 2 is polling well over a majority but short of the 60 percent super-majority now required for enacting state amendments.

5. Colorado Amendment 47, Right to Work. This amendment would allow any employee in a unionized Colorado workplace to freely choose whether or not to join the union. It is now being opposed by a united big business/labor coalition with a campaign war-chest of nearly $15 million, after a long negotiated deal whereby business interests agreed to help fund the campaign against this measure in exchange for organized labor withdrawing four initiatives (Amendments 53, 55, 56, and 57) that would have tilted policy toward labor.

The business/labor coalition is also opposing Amendment 49, which stops state and local government from deducting union dues from employees’ paychecks, and Amendment 54, which prevents recipients of government no-bid contracts (totaling $100,000 or more) from making political contributions.

Colorado was poised for a fierce battle between business and labor interests until last week’s agreement. Now, these three measures face a multi-million dollar onslaught from the state’s most powerful political players.

4. North Dakota Measure 2, A Corporate and Personal Income Tax Cut. Proposed by the North Dakota chapter of Americans for Prosperity, this statutory initiative would reduce state income tax for individuals by 50 percent and the corporate income tax by 15 percent. Former Governor Ed Schafer has endorsed the initiative, while the American Association of Retired Persons (AARP) and the North Dakota Farm Bureau oppose it.

A different tax battle rages next door, where the Minnesota Sales Tax Amendment, referred to the ballot by legislators, would raise the sales tax rate by 3/8ths of a cent to fund natural resource protection and cultural heritage programs. The Taxpayers League of Minnesota is leading the opposition, along with the state Chamber of Commerce and Farm Bureau.

These two states may help set the mood on taxes as economic times get rougher. But a number of other tax measures await voters in other states. For instance, Arizonans will face the “Majority Rules Initiative,” Proposition 105, that would require any initiative increasing taxes or requiring greater spending to be passed not just by a majority of those voting, but by a majority of all registered voters, a nearly impossible threshold to reach. Maine voters may veto Governor Baldacci’s tax increase on beer, wine and soft drinks to fund the Dirigo Health Choice program, after citizens collected enough signatures to force a referendum. Massachusetts voters can, though likely won’t, repeal their state income tax via Question 1. Oregonians will decide whether to allow state income taxpayers to fully deduct their federal income taxes ala Measure 59.

3. South Dakota Initiated Measure 10, The Open and Clean Government Act, would prevent the use of public funds for any “campaign, lobbying, or partisan purposes.” The measure prevents those who receive no-bid state contracts from making political contributions to the politicians awarding them the contract. Measure 10 also blocks the current practice of laundering tax dollars through county and municipal associations and other tax-supported groups to then be used in ballot measure campaigns and lobbying efforts.

Not surprisingly, the South Dakota Association of County Commissioners, supported by tax dollars from each of the 66 counties in the state, is opposing the initiative. Both the state’s Republican and Democratic parties also urge a No vote on Measure 10.

A July Field Poll found Californians largely unaware of the measure, but 63 percent were supportive compared to 24 percent against it. However, opponents, with help from PG&E and Edison, will have the funds to get their message to voters.

Another California measure, Prop 10, sometimes called “Big Wind,” would provide $5 billion in bond money to subsidize alternative fuels. Missouri voters will decide Proposition C, which, similar to California’s Prop 7, would mandate that 15 percent of the energy generated or purchased by investor-owned utilities be from renewable sources.

These questions tend to fail by significant margins, but with voters so thoroughly dissatisfied, that might change this year. Grassroots campaigns to win a Yes vote have sprung up in all three states. Campaigns against holding a convention have organized, too, funded by powerful business and labor interests in each state.

In Connecticut and Illinois, there are two striking features of the campaigns in favor of a convention. First, the coalitions include anti-tax conservatives alongside social justice advocates. Second, this broad coalition doesn’t speak of enacting their diverse agendas. Instead, the main focus is on obtaining a statewide process of voter initiative and referendum (and in Illinois’ case, recall, too). These voter-powered reforms are seen as the critical step to making government in some way accountable to the public.

Back in the summer, a poll showed the Illinois constitutional convention question ahead, but the opposition is much better funded and organized. And the measure must garner a supermajority, 60 percent of the vote, in order to prevail.

In Connecticut, the last time a question was on the ballot it got creamed, 3 to 1. Still, there is strong support for allowing voter initiatives, and the convention is arguably the best way to enact that process. Recently, Republican Governor Jodi Rell endorsed a Yes vote on the convention, for just that reason.

We may not always like our choices, but we want to make more of them — to have more control over our government. Though no process is ever perfect, this November’s 61 statewide initiatives and referenda, along with another 84 measures referred to state ballots by legislators, give voters more say.

That’s a step in the right direction.

Julio Rosas
Surprise: NY Dems Who Called for Cuomo to Step Down Now Appearing with Him, Open to Endorsement
Guy Benson
Caught Red-Handed: NBC News Busted for Editing Out a Crucial Detail in the 911 Call of the Ohio Shooting
Matt Vespa

CNN Hosts Deliver an Unbelievable Commentary About the Ohio Shooting...And It's Totally Rational
Townhall
Touré's disgusted that 'the right' cares 'about the life of the girl in the pink sweatsuit,' who should have taken her chances with getting stabbed by Ma'Khia Bryant
Twitchy
Biden Gaffes It Up Again, and This Time, It's About a 'Saloon'
Redstate
Insanity Wrap #192: The Panicked State of Our Terrible, Communist-Influenced Media
PJ Media