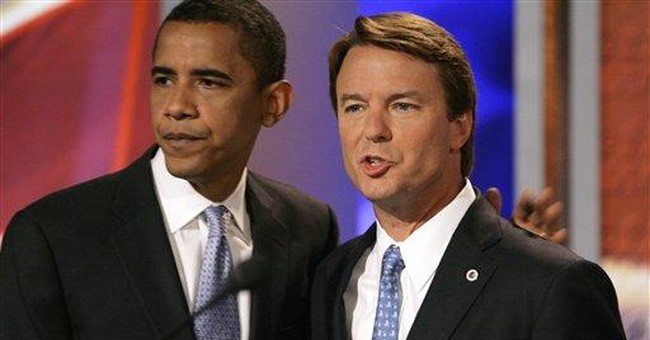 Is it possible? Could I have downplayed the benefits of term limits all these years?

I have been advocating and defending the term limit idea for such a long time that it seems unlikely I could have misjudged it by deprecation, no matter how mild.

But it’s worth pondering, especially in light of the current presidential contest.

The presidency has been blessed with term limits since before my time. Or, I should say, America has been long blessed with limited presidential terms. But, as I survey the upcoming likely two-party presentations — Barack Obama versus John McCain (let’s not contemplate the horror of a Hillary possibility, for just a few paragraphs, anyway) — I am underwhelmed. It’s senator versus senator.

The two most interesting dark horses of the campaign, Dennis Kucinich and Ron Paul, were also both sitting politicians. And each of them recently won (in effect) their House seats for another term. That is, they survived primary contests.

A number of former representatives and officials had run this outing: Huckabee and Romney had both been governors, and both exited their positions last year. The odor of “sitting politician” still lingered. Any such odor had long since evaporated from Mike Gravel, a former maverick senator from Alaska (1969-1981). Accordingly, the media hardly took his candidacy seriously.

Of the major players, only John Edwards stood out as the odd man, little like an actual incumbent. He had served a mere single term as U.S. senator years ago. But, now that I think it over, he did run as the official nominee of the Democratic Party for the Vice Presidency in 2004 . . . so an odor of the oil of anointing lingered. Long enough for the press to smell out his particular bouquet as “electable,” anyway.

And that’s what I’m getting at. I’m not trying to be fancy with an old-fashioned word. Let’s face it: There is a quasi-religious idea embedded in the succession of men (and now women) for power. It’s not a torch passed, but oil anointed. It’s the nearest thing to apostolic succession. If anointed, you are considered “electable.” And you basically get this anointing by being in power. And maintaining it.

For the mind of pundits and editors and other decision-makers in the news industry, that’s what makes a candidate “serious.”

But this “standard” excludes all sorts of interesting, capable people: Captains, merchant bankers, eminent men of letters, the generous patrons of art . . .

And this sorry state is what media folk have cooked up for us. It is they who act as gatekeepers. When they focus on this candidate or that, giving extra media coverage, interest in the voting population perks up for that candidate. And those whom they ignore have a much steeper hill to climb.

In their attempt to remain superficially “objective,” media folk consistently adopt the only standard near at hand, that of the horse race: “Has the person won an election recently?”

Which boils down to, too often: Has the candidate in question won re-election?

This rigs the whole presidential campaign, from the get-go. That’s why we get stuck with sitting or very recent House members, senators, and state governors as presidential candidates. All others get instant demerits, cannot be taken “seriously.” Not by the media. And thus not, alas, by the American public.

But what if we lived in a land where every elected position had term limits?

Here is what: There would be a larger pool of capable politicians who could not be easily disqualified from “seriousness.” Continual re-election would become thing of the past, making the media’s handy-dandy facsimile of the Anointed Ones — the ones who get the “Mandate of Heaven” — of little value. The prejudice in favor of “recently re-elected politician” would have to be modified. How? Modified to allow men and women who served their limited terms well.

And, perhaps inevitably, to men and women who went on to have interesting careers in the private sector of the economy. With term limits undermining the limited pool of the “continually re-elected,” the American standard for evaluating “seriousness” and “electability” would have to change.

It sure would be nice to have some really savvy, capable, and genuine outsiders to choose from — people who are not well-ensconced insiders like Hillary. Or Barack. Or John.

And throw in Tom, Dick, and Harry, too.

Placing limits to the terms of senators and representatives would make presidential politics all that much better.

Yes, folks, we’ve been blessed with term limits for the presidency for a long time. But the lack of them in other national offices has stultified our political culture. It has encouraged voters and journalists (the latter especially) to concentrate on trivial surface characteristics (recent re-elections? really!) rather than probing the constitution of candidates’ ideas and the content of their character.

And all that’s needed is a simple limit. On terms. The number of them.

After all, it’s by constitutional limits that our republic has retained any honor and justice over the years. And, with these further limits, that honor might actually increase.

Term limits. I may have cautioned that “they are no panacea” in the past (check out my Common Sense radio spots). But they are better medicine for ailing America than most other likely alternatives.