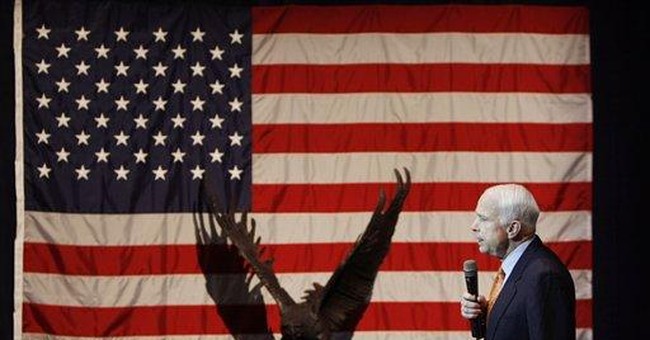 All of John McCain’s Republican competitors have dropped out of the race. Well, Ron Paul will still participate in some sort of low-key way (which may include a non-low-key march on Washington!), but Paul has conceded that he hasn’t the proverbial snowball’s chance to knock McCain from the running. McCain has all the delegates he needs; the nomination is sewn up.

Too bad. For if ever a candidate needed unstitching, it’s McCain.

But if you are looking for hope from a Democratic alternative, you might as well dash it right now. There’s nothing particularly freedom-loving, republican, or even democratic about the three major Democratic candidates.

Think Al Gore. You can’t keep a good corpse down.

In a recent column, Eleanor Clift fantasizes about the possibility of dragging Al Gore back from his political Afterlife as a PowerPoint presenter on global warming, to run again for the Number One Spot. Ms. Clift insists that there is no way for either Barack Obama or Hillary Clinton to get the delegates needed for the nomination. That means the super-delegates will decide.

The first thing to say about this is: how amusing! Democrats picking their candidate by the least democratic method possible — behind, as Clift puts it, “closed doors” — is just too rich.

As a person who’s stumped for democratic reforms around the country, I can say that, generally speaking, Democratic politicians tend to be the least interested in democratic reforms like initiative and referendum. They tend to deeply despise them, while Republican politicians — perhaps against one’s expectations — tend to see merit in these tools for reform. At least, more than their Democratic colleagues.

So, the party’s name notwithstanding, the idea of a non-democratic Democratic nomination process isn’t exactly the acme of hypocrisy. It’s just politics as usual.

But Democratic constituents are nowhere near so lockstep anti-democratic as their leaders are. And anything these super-delegates do will not be seen as very “super” by close to half of activist Democrats.

Selecting Hillary? Hillary is a player, as was her husband. The Clinton’s have been courting movers and shakers in the Democratic Party for decades upon decades now. All those Renaissance Weekends might pay off.

But it would surely elicit righteous indignation, even white-hot anger, from Obama supporters, who might very well view the Anointed One as the next worst thing to the Antichrist.

So, might a sort of canny wisdom come into play, as if a Political Muse were to whisper into hundreds of ears, saying Pick Obama?

It might very well happen. Obama may be as unreconstructed a Big Government Liberal as you could fear, but he sounds as if he’s ushering in a new Millennium, with utterly new ideas.

The newness of any one idea is of course not merely open to question, but open to challenge on sanity grounds. But that doesn’t matter for Democrats. Any group that could pick Al Gore and then John Kerry as their standard bearers in the last two elections hasn’t demonstrated a great deal of judgment.

And here we come to the third scenario, where Eleanor Clift’s years of political insidery incite her to insight: If enough super-delegates hold off on deciding, there could be no clear winner on the first ballot. After that anything could happen. And the most likely “anything”? Al Gore.

Gore won the popular vote back in 2000, and if you listen to Democrats, he would have won the Electoral College, too, had the sneaky Bush supporters not nabbed Florida, with the help of a partisan Supreme Court, and snuck in. So selecting Al Gore again could be seen as recompense.

It also seems like a new species of insanity itself.

Gore didn’t seem very likable as a politician. And, for all of his pretense to knowledge, he made a lackluster debater (George W. Bush) seem likable to more people than would have otherwise. Gore now seems to have lightened up, now that he’s no longer seeking office, and has only the future of civilization and life itself on his mind. He can crack jokes. He can smile comfortably.

I guess that’s what most Afterlives are supposed to look like. And, after losing his grip on the presidency, he couldn’t help but seem more human.

So, calling Al Gore back might make for at least a good show . . . at least to viewers of Buffy the Vampire Slayer. If Willow Rosenberg can slaughter a deer and regurgitate a snake to get Buffy back, the super-delegates can do something of the same for Al.

What Obama supporters and Hillary supporters would say, I’m not sure. What America would say I have a better idea: John McCain for President!

But that’s the danger of any course the Democrats take. The campaign has become internecine. The Democrats could be staring a Pyrrhic victory in the face. Clinton has crossed the line, says Gary Hart, she’s all but stated that John McCain would be a better candidate than Obama. And Obama has had to let at least one adviser go for saying really nasty things about Hillary. (It is generally held to be bad form to call a member of your own party a “monster.”)

This is the trouble with zero sum games. Too often they become negative sum games.

A zero sum game — in the trendy nomenclature of economists and other fancy dialecticians — is one where there is a winner and a loser. A positive sum game is one where all win. A negative sum game is where all lose. One reason I like freedom so much is that, in communities and in markets, we can all win. But politics runs on zero sum principles. You take from some, give to others. Zero sum. You elect one candidate from a field, and only one can win — the others must lose.

And the prospect of a big win versus a big loss puts us mere mortals into a dangerous mode: kill or be killed. A panic. A willingness to do or say darn near anything . . . like Hillary’s backhanded endorsement of McCain. We can even speak truths that aren’t supposed to be spoken . . . like calling Hillary a monster.

The real proof of this theory of zero sum games — that they too often lead to negative sum games — would be the selection of Al Gore.

But if Gore gets elected, we would all surely lose. Anyone who predicts a catastrophic climate future with global sea level rises, and feels certain about it all, is certain to be a disaster.

The sad note is, with John McCain as the Republican alternative, we will all surely lose anyway. There’s nothing that can be done, now. Go home. Tend to your gardens . . . and your state and local governments. Prepare for the next time. Because this election offers lovers of liberty scant hope.