A limit with CLOUT 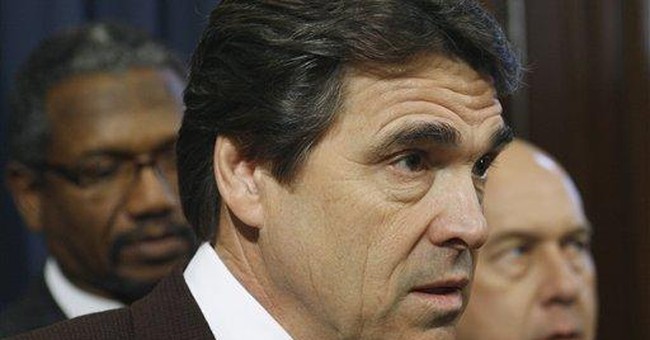 But there is some novelty in the Lone Star State: A new way to control politicians is being tested.

It is quite true that taxpayers tend not to like paying taxes. But it is also true that if taxpayers could somehow be ignored, and only people who wanted money could be heard, politicians could grow government until it sucked the economic life out of taxpayers.

So some controls must be put in place. Politicians, unrestrained by a constitution, are no more trustworthy than, say, a pickpocket in a cloak room. The difference between criminals and Congress, as political philosopher Mark Twain noted, comes closer to a technical difference than a substantive one.

That’s why citizens have demanded constitutional limits to spending. Many states have tried various methods. These methods work for a while, some very well, some not. In Texas, a group calling itself Citizens Lowering Our Unfair Taxes has repeatedly cried foul, declaring that Texas politicians have repeatedly ignored the state’s constitution, and spent money over the set limits.

How could this happen?

That last part is where it gets tricky. Governments don’t like limiting themselves.

Sheila A. Weinberg, head of the Institute for Truth in Accounting, tells me that most governments “throughout the country” neither honestly balance their budgets nor report meaningful financial data. The actual number crunching gets done by “government officials or their appointees” who have, as she puts it, “vested interests in the outcome of the budget calculations.” She adds, “This allows elected officials to use political math to circumvent the intent of budget laws.”

In other words, it’s hard to get a paid state employee to really come down on the side of citizens to restrain the grabbing of money from citizens. After all, state employees do know where their money comes from. When they forget, their unions remind them.

Besides, politicians feel they can do pretty much what they want. After all, they can’t be arrested for spending more, can they? They are immune!

That’s not what CLOUT thinks.

This Texas group, the afforementioned Citizens Lowering Our Unfair Taxes — that is, CLOUT — has sued the state of Texas for unconstitutional spending. In Hendee v. Dewhurst, filed back in June 2006, we now witness a rather new way to rein in out-of-control politicians. In a series of court victories, CLOUT has gotten courts to agree: taxpayers have legal standing to challenge state spending.

Now the suit moves to discovery, ready to depose members of the Legislative Budget Board to explain how Texas politicians go about deciding how to spend money, some of which they are not supposed to spend.

A motion for an injunction, preventing the state from spending $931 million while the case is in court, failed. Still, the judge is letting the case move forward to trial — an extremely significant development.

American government is supposed to work by a balance of powers. The most important balance, we’re finding these days — the most important check — comes from the citizens themselves. If the jury in Hendee v. Dewhurst decide in favor of CLOUT and against the legislature, a new chapter in fiscal conservatism will have begun.

And that’s a chapter we wish could be written for other states, too.

So, how does the case look? CLOUT Executive Director Edd Hendee — the plaintiff in the suit — expresses growing optimism: “We’ve been successful in defending taxpayer rights so far and I’m very confidant going forward. After listening to both sides argue in court, I think we have a stronger case than even we realized.”