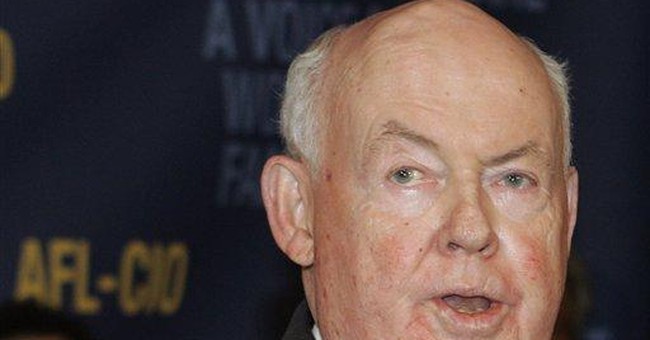 At the start of the school year in Bethel, Washington, the local teachers' union went on strike. A week later, New York city's cabbies went on strike. The two strikes lasted just a few days each, but could hardly be more different. And yet both tell us interesting things about life in our over-governmentalized age.

But first, let's clear up something. Both strikes were mass protests involving not force, but inactivity. The word "strike" is, indeed, a funny word for not showing up to work. It's such an active word. (When I don't show up for work, it's not usually because I'm being active.) The word is also violent. I don't have the right to strike you in the face. You don't have the right to strike me with a bowling pin. Our very liberties don't allow aggression.

Now, not showing up to work isn't very aggressive. Barring some legal, binding contract, everyone has a right not to show up to work. And employers [should] have the right to not pay those who don't show up.

And, while it lasted, the Bethel public school teacher strike was a case where a contract hadn't been signed. Why not just start hiring non-union teachers?

I don't belong to a union, as you can guess. But I do employ union workers. After all, as a citizen, I'm a shareholder in our government. More and more, it is in government that we find unionized workers.

But I'm not a Washingtonian, so it wasn't my biz to tell Bethel's teachers to start looking for other jobs. I can quote the state's Attorney General, though: "In Washington, state and local public employees do not have a legally protected right to strike. No such right existed at common law, and none has been granted by statute."

You might be asking yourself, how could a right to strike not be in common law? And the reason is that what we mean by a strike, by a union, is (as you suspected earlier) something more than just not showing up for work. It also has something to do with preventing other people from taking the job you are not showing up to work for. For strikes to be really effective, it helps that unions get special treatment, in law. There's a reason that Washington state, a once very strong union state, legally allows union strikes only against corporations; politicians are savvy enough to shift the "gun under the table" form of negotiation away from themselves.

Unfortunately, when illegal strikes occur, Washington officials rarely put up much more than a weak harumph.

The strike lasted only three days. The teachers pretty much got what they wanted: a policy about class size, and a raise. Most "harumphs" were uttered in private.

Funny thing is, during the strike, the school district website emblazoned a "schools closed" notice, adding, "athletics to continue."

The Big Apple cabbie strike provides a study in contrasts. For one, essential services weren't treated as quite the joke they were in the western Washington town. The majority of cabs remained in service, and Mayor Michael Bloomberg upped bus service and loosened up on the multiple passenger taxi restriction to allow riders to get where they needed to go.

For another, the cabbies who actually protested weren't demanding more from a government body. They were demanding less.

Instead of striking against the cab companies, they were protesting New York City government. In particular, the New York Taxi Workers Alliance — which is not quite a union, more like a trade group — sought to stop the city's Taxi and Limousine Commission's demand that all taxis include a special global positioning satellite (GPS) device and wireless credit card reading system. The cabbies fear they'll end up paying the cost individually.

Of course, as in many other towns, New York's cab market is oppressively controlled. Licenses are expensive. Cabbies are often ordered about. They were forced out of employment contracts and into independent contractor status, but their fares remain regulated. They may not even refuse fares to neighborhoods they deem dangerous.

The GPS devices are of no use to cabbies. They are to be only viewable by customers. The credit card machines might help some cabbies, but most see them as a bother, and as yet another financial drain. Accept a card, and you pay a percentage to the card company. And you pay for the device. And even if you, the cabbie, lease all this equipment from the cab company you deal with (as a hyper-regulated "independent contractor," of course), rather than have to install it yourself, you'll almost certainly still be charged. Yet another hassle, more paperwork, more complexity added to a job already known for its demands.

One could argue, as some have, that the devices are good for consumers. But what would really be good for consumers Bloomberg and the city's high muckety-mucks refuse to try: free enterprise. Instead of tweaking decades of coercive controls that hurt everybody, both cabbies and customers alike should advocate phasing out all regulations burdening the industry.

Alas, it doesn't look like the strike did much good. The mayor and his cronies in the government pooh-pooh the extent of the disruption. Service was down only 20 percent for the two days, or somesuch figure.

Too bad. In both Bethel, Washington, and New York, New York, the problem — what instigated the interruptions in service — was government's obsession with monopoly. Not anti-monopoly, mind you, but pro-monopoly.

In Bethel, as everywhere else in the country, it was the way schools were designed that gave power to the unions. Set up one de facto monopoly in a jurisdiction, and the corresponding monopoly, unions, are bound to form. The resulting situation becomes what economists call a "bilateral monopoly," which is the least efficient bargaining system possible.

In New York, it was the regulation of the industry, and the deliberate limitation of legal cabs, that led to the mess. New York government just doesn't like consumer options — or producer options — in private, for-contract fare service. They prohibit those options, making all providers provide pretty much the same thing.

Both the provision of schools and of taxis should be opened to competition. When that happens, we'll have better taxies and better-informed people.

The Big Apple and Bethel, Washington, could hardly be more different. But it's really no shock that they both provide lessons against big government. Big government is everywhere.

And so are its lessons.