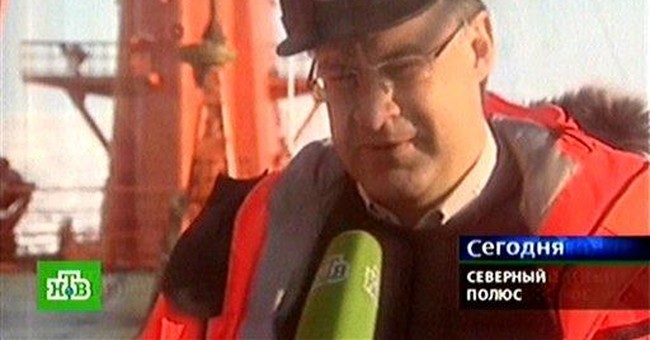 There is no pole at the North Pole, no actual pole.

Nor is there a Pole, as in Polish person (though the guy who recently swam in the melted pool that now surrounds the pole, might have a little Polish in him).

There have been (and likely will be) Russians. This made a news splash not long ago. Perhaps you read about it in the Daily Mail: “Putin’s Arctic invasion: Russia lays claim to the North Pole — and all its gas, oil, and diamonds.”

Or perhaps you noted the story as it developed a month later, from the BBC: “Russians to dive below North Pole,” which explained that “Russia is sending a mini-submarine to explore the ocean floor below the North Pole and find evidence to support its claim to Arctic territory,” a delightful bit of absurdity on the face of it, since, well, because there is no pole to go “under” or “below,” any claim to scientific awareness in the article was undermined by the editorial department at the BBC.

Or maybe it was the red flag story that you flagged from the International Herald Tribune: “Russia plants flag on sea floor at North Pole.” Tom Lehrer once pithily described America’s diplomatic policy as “Send in the marines!” Now, Russia’s biggest foreign-policy ploy in ages can be dubbed “Send in the submarines!”

A Russian expedition traveled Thursday in a pair of submersibles more than four kilometers under the ice cap and deposited a Russian flag on the seabed at the North Pole, making a symbolic claim to vast fields of oil and natural gas believed to be beneath the sea north of the Arctic Circle.

The article quickly puts the much-covered (in Russia) event in context as "an openly choreographed publicity stunt," but some stunts are more important than others. Canada, whose vast territory borders the northernmost sea which in turns borders the vaster territory of Russia, has the most to lose by the move.

Tell that to Putin. (By the way, can we just get it over with and call him “Vlad”? “Vlad the Impoler”?)

This kind of state action used to lead to wars. What does it lead to, today? An endless set of meetings at the United Nations?

Or the beginning of the bathyscape (exploratory submarine) craze, a boom leading to an industry bubble?

Maybe the whole matter is a bubble in the ocean, since it is probably a long way off before Russia can really profit from this.

But it does suggest that Putin is putting his chips on global warming. If and when the ice melts on the Arctic year around, it would be so much easier to exploit the underwater geological plates.

As this becomes a live issue it will become obvious that the Law of the Sea and other international agreements need more than a bit of improvement. Environmentalists and ecologists have made a lot of noise about the need for no fishing zones in vast tracts of the sea. I have argued that we need (either instead or also) to establish vast tracts of private property in sea. And this is just for plant and animal life.

Not to wave a red flag here — or black — but it’s not national territory that is most important. It is the rule of law — and the allowing and encouraging of private enterprise — that is going to matter for the future of humanity. Alongside these things must be strict tort claims for pollution and other harm caused by industrialization in that most literally fluid of potential properties, the sea. (My point is, why not get the rule of law right, right at the beginning of the development of a new property domain?)

The placement of a titanium flag on the ocean floor at the North Pole does not bode well for the development of reasonable property rights. And we can bet that the reactions to the Russian move by Canada, Norway, Denmark, and the U.S. are not going to increase the likelihood of good policy, either.

In any case, the North Pole ain’t what it used to be. And here I thought that such a thing could be said only about the magnetic north pole, which is constantly (and increasingly) shifting.

True north may not shift so much, but policy towards it does.