Enemies worth a laugh 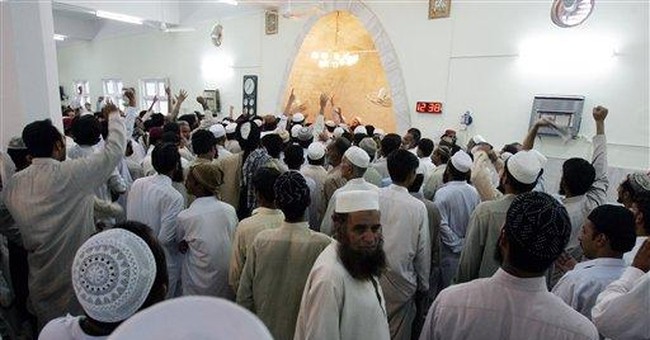 "I always made one prayer . . ." Voltaire wrote. "'O my God, make our enemies quite ridiculous!' God granted it."

Recently, ridiculous enemies have been popping up everywhere, like those persistent rodents in Whac-a-Mole.

In Grand Rapids, Michigan, Board of Education member David Allen must be chuckling. He had committed the ultimate heresy, saving his school district nearly four million bucks by pushing the privatization of some of the district's transportation services as well as the substitute teachers.

Understandably, this earned him honors in the community.

But not everyone was pleased. The Committee for Positive Community Change launched a recall campaign against Allen. That's no easy task. In order to force a recall election, the law requires the signatures of 16,500 registered voters on petitions. Of course, the Michigan Education Association lent a helping hand.

And, then, there they were on the deadline day turning in their signatures. The group's leader Kenneth Muhammad (also a local Nation of Islam leader) told reporters, "As far as we are concerned, we met our objectives."

What were their objectives? How did they do? They gathered a whopping three signatures. Just three.

Paperwork. Editorials. Several hearings. And the consequent outpouring of public support? Three . . . minus three. Tragically, not one of the signatures turned out to be valid. Because, at least according to Grand Rapids officials, the petitions were not filled out properly.

If you look on the bright side, though, the group was only 16,500 signatures short.

You might not find 16,500 citizens in my home state of Arkansas who can yet laugh about their enemy, Charles Ormond of Morrilton. Ormond has two ballot measures in the works. The measures are confusingly written, but are they confusing enough to successfully dupe folks into voting one of them into law?

One is an attempt to weaken term limits. Legislators tried that in 2004 and got clobbered by voters, but this is a clever effort, not seeking to increase the number of terms most representatives may serve but the l e n g t h of each term. Very smooth.

There's also convoluted language in the measure that would especially apply to former legislators like himself. (Yes, and this is an important point: Ormond was term limited out of the state House of Representatives last January.)

Believe it or not, Ormond's other ballot measure is even more self-serving. It's an attempt to get a lottery and gambling commission into the state. It's another of his perennial attempts at constitutional tinkering. And, get this, the title of the measure names himself, Charles Ormond of Morrilton, Arkansas, as the first commissioner of this new agency. For a ten-year term, no less. And at a "reasonable" salary, which commissioners would set for themselves.

Let me pause here. I have to suppress laughter. And a sort of grudging admiration. If you go into politics to serve yourself, why not go all the way?

Back when he was serving the people, Ormond was dubbed the worst legislator in Arkansas. But what's he aiming for now that he's out, "worst citizen"?

Of course, he has plenty of competition. Just go into the blogosphere, and ridiculousness sort of blooms, like the lovely spring dandelions on my lawn (lovely is my adjective, of course; my wife has other words for them).

This whole column could be devoted to ridiculous arguments encountered on blogs.

I'll list only one, just to acknowledge the mountain under the molehill. Here goes:

When Brett Narloch of the North Dakota Policy Council came out with a proposal to require government schools to put their budgets on public-access Web pages, he got some strange criticism. The blogger for the state's Democratic Party attacked, but didn't address one single issue of Narloch's proposal. Instead, he sniped at Narloch's past political activities, noting Narloch liked CAFTA, and had advocated private accounts in Social Security to the current uninvested pension system.

And then the blogger asks, "I wonder if there's a hidden agenda in his new scheme?"

Maybe. Maybe not. It's irrelevant, really. For why would anyone want a government-supported institution to keep its books away from voters? To demand no hiding doesn't reveal a hidden agenda. But to oppose this "unhiding" reveals a preference for, well, hidden agendas galore . . . that is, hidden spending.

Amusingly, elsewhere on the Democratic blog the Bush administration comes under criticism for lack of transparency.

When our foes self-destruct, they save us so much trouble. And in cases where we have actual, fighting enemies, our enemies' self-defeats attain an almost "metaphysical level of importance" (to channel John McLaughlin for a moment). The very best kind of enemy is the kind that does our work for us.

Yes, you read that right. Not all of our enemies who want us dead succeed. Many fail. Spectacularly. As Williams puts it:

An analysis of the attacks carried out in the past two years reveals a curious fact. In 43% of the bombings conducted last year and in 26 of the 57 bombings traced in this study up to June 15 this year, the only death caused by the bombing was that of the bomber himself. This means that, astoundingly, about 90 suicide bombers in this two-year period succeeded in killing only themselves.

Now, I have long objected to the term "suicide bombers." Those who succeed are secondarily suicides; primarily they are murderers. But when they don't succeed, as in the cases Williams focuses on, that is indeed all they are, suicide bombers.

The glorious incompetence shown by these Afghan suicide bombers almost beggars the imagination. One Taliban would-be bomber got arrested before he could even accomplish the act of self-immolation: the man was pushing his explosives-filled car towards its target.

He had run out of gas.

I think the prayer of thanks can, in this one case at least, be honorably made in the form of a laugh.