The race to spend more money 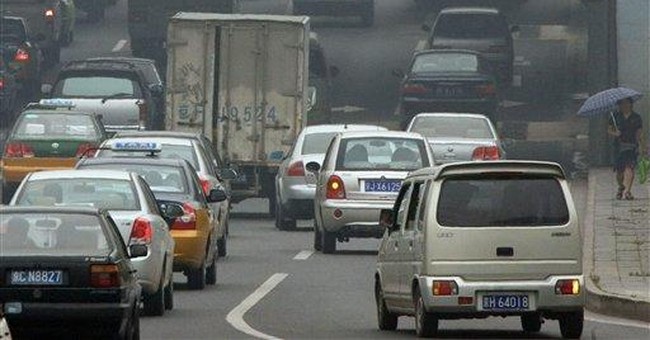 Everyone speeds . . . but what about over-speeding? Could it be that even in Virginia, the land of perpetually bad traffic, only a minority regularly puts pedal to metal to drive 20 miles over the speed limit? That's said to be reckless driving, after all.

But it's not for the public safety that the the state of Virginia has begun to impose huge, whopping fines, for over-speeding — more than several thousand per incident. It's not a focused campaign to get us all to drive better, safer.

It's a massive campaign to allow politicians to spend more. The expected $65 million to be raised this year this way was the Democratic governor's (and legislators') response to a defeat of his coveted tax increase. The fines are to be directed to road development.

Then came the huge, honking outcry. Since July 1 more than 130,000 Virginians have signed a petition to repeal the law establishing these whopping fines. The legislature has been inundated with calls and emails.

Delegate Robert G. Marshall, who opposed the law before passage, now leads the legislative campaign against it. "Criminal and civil penalties shouldn't be created for raising money," he said. "You don't want to turn our police into gun-toting tax collectors."

You Aren't David Albo
But turning the police into tax collectors is precisely what has happened. There are several reasons for this. The governor's support was one.

But without the tireless, 20-month campaign of David Albo, this bold new approach to public finance and public roadway repair would never have "got off the ground."

It was Albo's bill that put the new and rather complex fine-and-tax structure for over-speeders in place. He readily admits it. He's proud of it. Or, at least, was. He doesn't seem nearly as visible these days as he was when the bill was passed.

I'm not going to explain the structure of the penalties here. I've read conflicting accounts, and even after peering at the law until my eyes are bleary, I'm not at all sure that I could explain it without the help of a lawyer. All I know is that a thousand bucks here and $2500 there, and an extra $100 for special people — all for one infraction, depending on how many tickets you've had — and these whopping amounts can really add up.

Your eyes may have gone through their own transformation looking at the dollar amounts, but the key phrase in my previous paragraph is this: "without the help of a lawyer . . ."

You see, David Albo is not only Springfield's Republican delegate, he is also a lawyer. His business is defending citizens against traffic fines.

Though the new law states that "The purpose of the civil remedial fees imposed in this section is to generate revenue" (Virginia Code 46.2-206.1), David Albo's revenue is just as relevant. From now on, more and more people nabbed for speeding will see a strong (read: overwhelming) economic incentive to hire a lawyer.

And why not hire the man who wrote the insane law under which they are maddeningly over-fined?

Welcome to Virginia
If you have ever driven the major roads of Virginia, you know why speeding happens: To compensate for all the non-speeding that happens.

Traffic jams are endemic. And, when not jammed, the average speed seems to pace quite a bit over the limits set.

Some people I know simply blame the people for all this. Bad drivers, dang them.

But others wonder if the speed limits aren't set too low, encouraging reasonable people to turn into scofflaws. Worse yet, the general chaos caused by thoroughly clogged thoroughfares can turn reasonable drivers into either defensive neurotics or racing rage-a-holics.

The biggest problem is funding, though. Virginian voters would really like to fix their roads, and build more. They more than anyone else know how bad the situation is.

But they have two big problems, closely related:

Politicians keep raising taxes. Virginians have been betrayed so many times by their politicians on the matter of taxes that they simply don't trust politicians any longer. Of any party. For almost any reason.

Moreover, even while our taxes go up and the budgets of state and local governments continue to expand (at a far greater clip than inflation and population growth) there never seems enough money to improve the roads.

Back in 2002, the legislature, at the prodding of then-Governor Mark Warner, put referendums to raise local sales taxes to fund local road projects on the ballot in a number of counties in both Northern Virginia and the Tidewater area of southeast Virginia. Both areas cried out for traffic relief.

The forces in favor of the tax — the usual suspects of the political establishment — grossly outspent anti-tax forces. And Governor Warner stumped for the tax, which looked like a winner. It was to go "only" to roads. It was needed.

But then the Democrat governor began to assure voters that yes, gosh yes, really, the tax would go only toward roads. No bait-and-switch, folks. No shenanigans.

Yet the people heard the subtext, not the text. They heard what they feared: Virginia's politicians are traitorous over-taxers who can't reduce the enormous rate of growth in spending, much less cut funding on anything, always playing around with funds to keep all balls and all programs up in the air . . . all special interests appeased.

So, the general fear heightened. "The politicians will probably siphon funds from these taxes for other projects." And the general cynicism increased. "If we vote for this tax increase, we'll be paying for stuff we've already paid for eight times over."

The measure went down to defeat. Hard.

In 2004, Warner came back, though. With the help of longtime incumbent tax-loving Republicans in the state's senate, he pushed through the largest tax increase in state history. When the House Speaker suggested the tax increase again go to a vote of the people, Warner pooh-poohed the idea as the "Californication" of our sweet Virginia.

In other words, he knew the people wouldn't go along.

Not surprisingly, little (if any) of that whopping tax increase went to help fix the transportation mess.

So when Governor Tim Kaine came into office, he wanted to raise taxes, yet again, to — you guessed it — fund increased transportation spending. But his proposal failed to pass in the legislature. So, he and Albo and a few others pushed through these outrageous über-fines.

The Robber Meets the Road
The new law hasn't worked out so well. In addition to the incredible success of the online petition, local officials are also beginning to balk. Tomorrow, the town council in Front Royal, Virginia, votes on a resolution to prevent their police officers from enforcing the abusive "abusive driving" fees. Can the town legally sidestep enforcement duties? That's not clear, but says the town's attorney, "We are telling them what we think. . . ."

The new law is a sign of just how messed up Virginia politics is. A function of modern government as basic as roads gets treated by the state as an add-on requiring extra effort, not basic attention.

It's possible, I suppose, to blame the citizens. Call 'em Cro-Magnons who hate taxes more than mammoths hate fire. But the sophisticates who run the system — people like Albo, people like the governor — don't seem able ever to do the civilized thing, the hard thing necessary: prioritize.

Instead, they nourish every old program, keep adding on more, spend ever more money.

There's something wrong in Virginia, and it isn't the citizens or the drivers. Even Virginians who don't habitually over-speed see the out-of-whackness of the excessive fines.

Yes, we want better roads. But we already pay taxes. Vast amounts of taxes. Why aren't roads covered in the basic bill? It's infrastructure, not extra-structure. Why do our politicians demand we pay extra for such a very basic good?

The answer, I'm afraid, is that they want to spend money on other stuff, stuff we don't need as much.