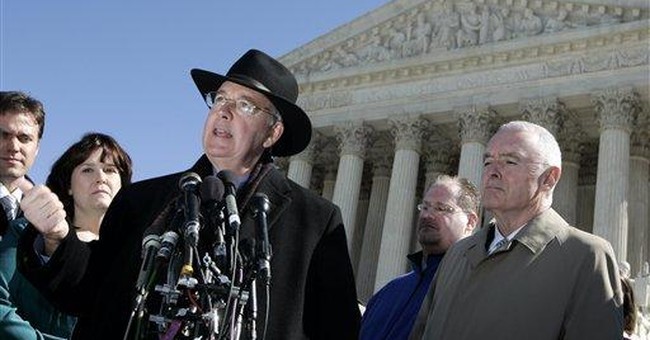 Independence Day was nice. My kids enjoyed their sparklers and the public firework displays. The traditions of the July 4th holiday went off without a hitch. Well, that is, except for my yearly reflection on the state of our freedom, our actual independence.

Something just seems a bit off. In some ways, we descendants of Sam Adams, Ben Franklin and Thomas Jefferson enjoy tremendous liberty. In other ways, well, not so much.

For instance, we possess an untrammeled right to burn the American flag. Forget the fire code: Government cannot regulate it. The First Amendment robustly protects such politically symbolic speech.

But what good does this do me? I just don’t have any desire to burn the flag.

And consider: Had just one Supreme Court justice switched sides in a recent First Amendment case, a public high school student would now be able to hold up a banner reading “Bong Hits 4 Jesus” at all school events.

Sure, I know it’s hard to accept such smothering censorship. But, again, I’m really not a “banner person.”

What I am, I guess, is a “petition person.” I often work to petition my government. Among the many issues I’ve placed before my fellow citizens, for their practical attention, have been measures to check government spending, cut taxes, term-limit politicians, protect property owners from eminent domain abuse, or any number of other reforms.

This isn’t symbolic speech, mind you, but speech designed to have a very real effect on the government. Moreover, the right to petition is mentioned outright in the First Amendment, while the Constitution’s framers plum forgot to mention flag burning or banners about bong hits.

But when it comes to petitions, our legislators seem to take the opposite tack. They constantly regulate (read: restrict . . . or even abridge) our rights.

In Oregon, the legislature wants to require those who wish to gather petitions for voter initiatives to register with the state and then go through government training classes. What impact the new regulatory regime would have is unclear, except for raising, quite considerably, the cost of putting a measure on the ballot.

On the other hand, flag-burners certainly don’t need to register with anyone. Or even be trained in fire safety. Apparently, citizens gathering the signatures of fellow citizens to directly address the functioning of government is a more “dangerous” act than setting something on fire in a public place.

In South Dakota, a new law went into effect last week forbidding initiative campaigns from paying those who circulate their petition on the basis of the number of signatures collected. Instead, petition circulators must, if paid, be paid by the hour.

Why? Legislators claim the purpose of the ban is to prevent fraud, even though they cannot show any evidence of fraud related to the method of payment. The only certain result is, once again, to dramatically raise the cost of putting a ballot measure before the voters.

Similar laws have been enacted in Montana, North Dakota, Ohio, Oregon and Wyoming.

In Alaska, petition circulators can be paid on a per signature basis. But by law, not more than a single dollar per signature. Paying a dollar-fifty is illegal.

However, there can be no such rules about paying people to burn the flag. That would be unconstitutional. Anti-American arsonists can be paid as much as they can command on the open market. Keep your laws off their fires. No silly rules about not paying by the scorched flag-pole and having to compensate by the many hours spent setting Old Glory ablaze.

In Nebraska, legislation was introduced to require those who circulate petitions to wear a big badge showing their name and other information. To me, there is something terribly disconcerting about such a proposal. It’s just that, historically, other programs that required certain citizens to wear a noticeable “badge” in public just really don’t recommend further experimentation with the idea.

You’ll no doubt be relieved to learn that there are no such legislative attacks in the works against the flag-burners. No attempt to slap government name tags on them.

Now, really, I’m not suggesting we need new laws or a new bureaucracy to regulate the one or two anti-social socialist fellows hell-bent on burning the flag every decade or so.