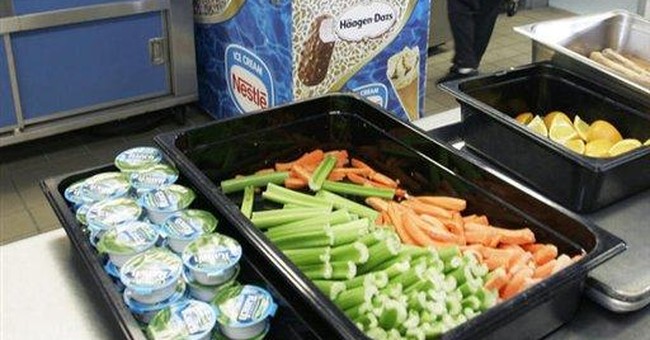 Let's not sugarcoat it: If Democrats have their way, the federal government will soon do for energy what it has already done to sugar.

Last week the Senate passed a bill to regulate further our energy markets. The idea started out with the desire to make America more self-sufficient in oil production. But a whole host of subsidies, tax credits, requirements, and what-have-you were thrown in, muddying up any clear purpose. The new law even sports some "price-gouging" measures that are sure to [insert Economics 101 lesson here].

Well, nothing's certain. The House hasn't passed its energy bill yet, and anything could happen, I suppose.

I haven't studied the bill. I'm hoping it dies somewhere between now and a presidential signature, so I don't have to give it a tedious read. For now, I note that it sounds like the usual compromise between idiocy and indecency.

Whoa, you say: Since I haven't studied the bill, how can I in good conscience say such nasty things about it?

Americans pay far more for sugar than what they would pay lacking the attention of Congress. Cato Institute scholar Chris Edwards reports that the federal government's guaranteed prices, trade restrictions, and production quotas on sugar cost consumers and taxpayers billions. And, "for each sugar-growing and sugar-harvesting job saved by current sugar policies, nearly three confectionary manufacturing jobs are lost."

Do we really want something like this to happen to oil?

And do you hear the Giant Sucking Sound? Yes, jobs go both north and south, because Canada and Mexico have lower sugar prices. Much lower. So "imports of food products that contain sugar are growing rapidly. . . ."

It doesn't end there, of course. America's sugar policies have probably helped spur along the use of sugar substitutes. The main one isn't better for you, though, but far, far worse: high fructose corn syrup. It seems to be in everything these days, including the blobs of fat on America's left, right, front, and rear.

I think about high fructose corn syrup every time I look in the mirror. And, oddly, sometimes when I think about such great innovations as ethanol and the harvesting of corn so it can be processed it into biodiesel.

The last twist of the knife is, of all things, environmental damage. As Edwards writes in "The Sugar Racket," "Large areas of the Florida Everglades have been converted to cane sugar production because of federal protections and subsidies."

So, if the policy is so bad, why does it remain?

This is how politics too often works. Say (let's pretend, for a moment) that you are a politician. A few constituents in your area produce some sort of sugar. A few workers get employment. And they spend money in the local economy. Anything you can do to prop up their business, you're a hero, a valued friend to the owners and the workers, alike, and select other locals.

The fact that the policy of price supports harms nearly all Americans doesn't matter, because the harm to each is comparatively small compared to the benefits to a few. And, most importantly, more than a few happen to be in a position to vote for you.

The politicians representing other districts might object, if they were representing the people who live in those districts. But they have political horse-trading to do, too: You scratch my back; I'll scratch yours. You rip off my constituents; I'll rip off yours.

The special interests loudly applaud the process. And contribute.

So, how could this change?

Well, there is a farm bill churning its way through Congress. And Congress is not obligated to continue bad policy. (It just wants to.) Mr. Edwards notes that "When the Republicans controlled Congress, they shied away from reforming sugar policies in the 1996 and 2002 farm laws. The majority Democrats now have a chance to show that they are different."

But of course they aren't much different. And, to the extent that they do differ from Republicans, they tend to be worse.

The kind of regulations and subsidies that prop up sugar prices in America are the kind that Democrats are addicted to. "Progressivism" is all the rage among Dems right now, and so-called progressives tend to see every real-world problem (say: scarcity) or pseudo-problem (say: foreign production and trade) as one to be "solved" by government.

But of course nearly every one of their plans goes so far off mark that things get demonstrably worse. (Leading, of course, to the very opposite of anything like progress. So much for "progressivism.")

They have a simple solution to this additional problem, too: blame it on the market. Not on their plans.

Why would they care, though? No election will hinge on this issue.

I'm willing to be proven wrong. Maybe someone can explain to me, with good economic logic, why the new energy bill is good even while the oh-so-similar basket case of regulations, subsidies, and tariffs that make up our sugar policy remains as it is, very, very bad. Maybe there's a subtle theory that can explain how doing the same thing over and over can lead to different results, and not be insanity.

And, maybe, Congress will stop meddling in sugar. When porkbarrels (filled with over-priced oil substitutes) fly.