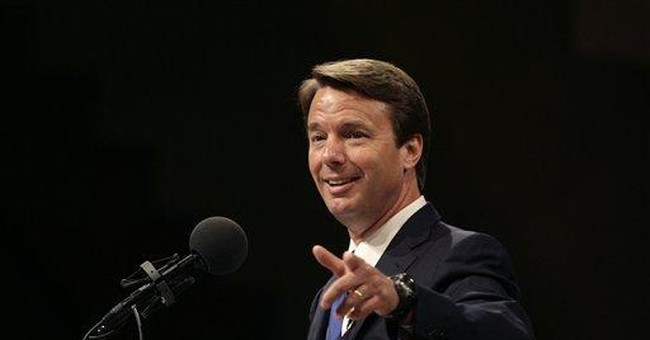 Could Democratic presidential candidate John Edwards actually be right about something? Not where to go to get a haircut, mind you, I mean about there being two Americas.

There is the vibrant America . . . and the stagnant one.

There is the America of ever-increasing wealth, innovation, creativity, of a dynamic economy, new jobs, new products and services. Choices galore. Information overload. The abundant work product of freedom.

In one America it is what you produce that gets you ahead. In the other it's who you know.

In one America, to earmark some money means setting aside funds (into savings) for a purchase — a car, house, college.

In the other America, to earmark is to grab from taxpayers to give to cronies. It is the highest rite of career politicians: buying their votes with other people's money. Oh, there have been reforms, sure. But a recent bill in the House contained 32,000 earmark requests.

In one America, we decide what we pay for. We choose constantly about little things and big. We call the shots. Or we walk down the street and associate with someone else. So we have some faith in those we work with.

In the other America we vote. But we rarely get what we vote for.

Democrats took over Congress from Republicans less than a year ago. No surprise, really, the Republican Congress had been held in utter disrepute. By Democrats, too. Now that leadership has changed sides, how's the honeymoon going? A recent Gallup poll already shows the new Democratic Congress with the worst approval rating — just 14 percent — in the history of the poll (since 1973).

In one America you get what you pay for; in the other America they take what they want from you. And people notice.

A Noticeable Difference
Compare Wal-Mart and the Washington Metropolitan Transit Authority. The Wal-Mart symbol is a happy face. Metro's might as well be a frown with tread marks over it.

I'm not taxed to support Wal-Mart. I can go there or not. Many people, me included, have gone there and will go there. We spend money, but often save money compared to Wal-Mart's competition. We're not too self-righteous to admit we like money. And stuff.

But I am taxed to support Washington, D.C.'s Metro. This lack of real, voluntary funding, related to the lack of any profit motive, means Metro trains and tracks break down regularly, causing long delays. Customers complain. Metro workers get tired of the ragging. Fights have broken out. And, sure, Metro constantly demands more money from taxpayers.

In much of America the worry is about parking and aisle space at Wal-Mart. That's not seen as a problem for Wal-Mart. The company just builds new stores to handle all its new customers.

At Metro, too many customers add up to a huge problem. The more people ride, the more it loses money. When Metro adds another line, it loses more. That really is a problem.

Now Metro refuses to release any information about its pension system, even though the concern is publicly funded. Said one pension trustee, Amalgamated Transit Union Local 698 President Jackie Lynn Jeter, to a reporter: "It's not your business."

So, of course, in the other America there is a union-funded mega-campaign to punish Wal-Mart for its success and a consistent push to confiscate more of people's money to fund more mass transit like Metro.

A Necessary Work-Around
These two different Americas meet at the ballot box. And there, at the ballot box, voters choose. Trouble is, instances of buyers' remorse are much higher there than in the marketplace. Candidates tend to look a lot better before an election than after.

So, after the election — after Candidate A has metamorphosed into Politician B, or if the right candidates never showed up in the first place — in 23 states and roughly half of local governments there's a work-around. A work-around for choice.

It's the voter initiative process. And voters have used the process to enact term limits and tax limits, property rights protections and all manner of other reforms.

You can guess which America loves the initiative. Polls show that voters in every single state and across all major demographic groups favor the right of citizens to be able to pass laws our legislators refuse to pass or stop measures they pass that lack our approval. Why? Because with initiatives we can overrule our elected officials when they get out of line. That's important.

But the other America? It has increasingly sought to stop such decision-making by voters. Throughout the 23 states with meaningful initiative processes, legislatures and powerful special interests seek to tie the process up in a myriad of restrictions from who can circulate a petition to how they can be paid.

And when citizens overcome all the red tape and collect hundreds of thousands of signatures on petitions, the powers that be sometimes resort to . . . well, I'm searching for the word . . . tyranny? . . . making-it-up-as-they-go? . . . insanity?

The Oklahoma State School Boards Association challenged the petition in court. The group's executive director, Dr. Keith Ballard, argued that "Other areas would have suffered greatly," and pointed out "the great resistance that this had in the education community."

In which America does the "education community" reside? I know that in my America there are plenty of parents who certainly like to spend education money in the ol' classroom . . . where their children just happen to be. But those in the education community aren't necessarily for education as such.

The legal case charged that the "gist statement" on the petition had been incomplete and misleading. Different Americas can, I suppose, argue endlessly over whether a certain statement captures the gist of a proposition well enough. Face it, we still have no consensus on what the meaning of the word "is" is.

But the gist statement should not be grounds for throwing out the petitions of hundreds of thousands of citizens. After all, the statement is not mandated by Oklahoma's constitution; it is yet another legislative add-on. One now twisted to block the clear will of the people.

The suit was not brought by the people signing the petition, but by the very interests who want to keep spending that money outside the classroom. Truth is, if any citizen had been unsure of the measure after reading the gist statement, he could have either chosen not to sign the petition or read the full text of the proposed law, which the state's constitution has always mandated be placed on every petition.

One Oklahoma school board member defended the court's decision by arguing that signing petitions rarely involves "thoughtful consideration from the signatory."

Those in the other America think self-government is too far beyond the reach of most Americans, so they'll decide for us. They are always eager to protect us from the awful rigors of decision-making.

There you have it: One America seeks to live in freedom, wanting choices at the mall as well as at the ballot box.

The other America desires to live in power. Thus, the politicians promise to give us everything. Except that elusive freedom to really choose.

The future of America depends on who wins.

Which America will it be?