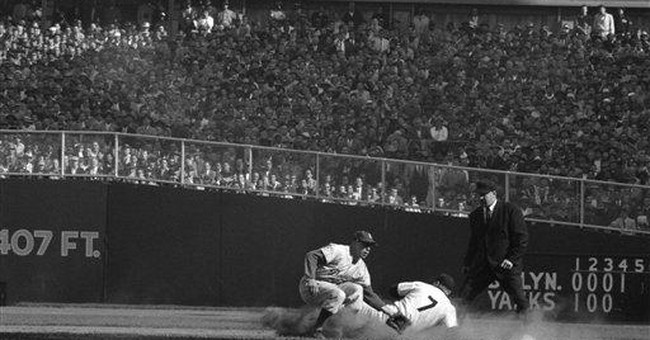 Rats on stilts! If you're an Aussie, you immediately think 'roo. If you are an American suburbanite, you probably think deer.

In many suburbs, east coast and west, deer overrun the place. I know gardeners who've tried everything to keep deer out. Some just throw up their hands in despair, and watch flower after flora after tree get gnawed down to the brittlest twig.

It's amazing how many animals find niches in a suburban environment. When the census taker comes knockin' again in a few years to ask how many residents make home at my address, I'm going to have to ask, "Human? Or do I count the raccoons, squirrels and possum that live in the hedges? Or the robins and wrens nesting on the back porch?"

Since I'm such a lousy gardener, none of this troubles me much. Indeed, I kind of like it. It's great to see "nature" in the city, even if it soils my shoes. I'd probably even see more if my dog Bugsy weren't also on the census list, barking many possible residents and transients away.

Really, the rats on stilts make for one of the better parts of suburban life. I'm no fan of possum, but deer, squirrel, 'coon, fox (yes, fox!) and porcupine do add to the quality of life here in Suburbia, USA. (Bugsy adds a comment here: forget porcupine!)

So, with this in mind, perhaps you can understand my skepticism about the "new urbanist" mindset that seems to be growing out of control in America's cities. The idea of this whole new breed of planner is: crowd people together.

Aside from the whole caged-in feel, and the problem of top-down coercion and control, one of my instincts rubs up raw against this movement: How un-green it is. That is, to encourage green outside of city limits, new urbanists in effect minimize green within.

That's what tends to happen when you double the density of a city. And that's precisely what's all the rage in city after city in America. New urbanism is tres chic, and it's spreading. The British government now pushes high-density housing for all new developments in Albion. Of course, like so much planning talk, it's been cordoned off from discussion, as if zoning were an endangered species. According to the BBCNews, the new recommendations and proposed zoning laws make up

perhaps the single most important piece of housing legislation for decades, yet it is not well known and the potential consequences of it have not been widely debated.
There are significant downsides to the alluring vision of the compact city. Evidence from the UK tells us that green space is one of the first casualties of high-density urban development.

Lawns, hedges, gardens, parks . . . all these green places are good for us. It may be that human beings need some reminders of the natural world, something more than a brochure sent from the Sierra Club. We need palpable green, live birdsong, unscheduled squirrel chatter, and the occasional rustle of leaves in the wind (especially if it's not queued up on one's iPod).

It's for these things I am glad I live in suburbia. It might be nice to live in the country, in a truly rural setting. But hey: I'm not sure I could drag my family into Green Acres; the sorry adventures of Oliver Wendell Douglas remind me, nightly, of the troubles that some of us city folk might get into when we wander too far out of our element.

Suburbia gives me what I need. I may be the world's most tardy gardener; I mow the lawn only every other haircut; and sometimes walking the dog seems just a way to get some privacy to take a conference call on the cell. But still . . . this is the life.

And the new urbanists want to see it end. They hate suburbia. And they say they love nature.

They love nature so much that they are willing to forgo it, I guess.

Thankfully, there are environmentalists on my side. Sorta. One of the more interesting concepts to come out of enviro discussion in the past dozen years or so is "Nature Deficit Disorder." It used to be that kids (like me, ages ago) would play outside for hours on end. In nature. In creeks, ditches, even dump yards (great place for sea gulls, by the way). And that, folks, is good! Not exactly Walden's Pond, in most cases, but better than hours on an X Box boxing one's mind away.

Nowadays most of us parents are so fearful that we don't let our kids out long enough to play. In the mud. In the leaves. In the yard. Climbing the tree. You know: what we used to call childhood.

People who allow themselves to be corralled into today's reservations for urbanites, into high-density housing approved by the environuts on the metro zoning commission, are robbing their children of what feeble grasp they can get of nature, on a regular basis.

Am I overstating the case? Maybe.

But it's heartening to discover real ecologists talking about suburban life as one of biodiversity. We may be annoyed by the rats on stilts, alarmed by the emboldened coyote, and have more than a little reason to decide that the cawing of the crows ain't up there with the elegant rhetoric of the nightingale, but these staples of suburban life do amount to an advantage over concrete, brick, and sheetrock jungles where the most peaceful station of the day is the lobby water fountain, filled with pennies.

In Britain, studies are said to have "shown that building at the kinds of densities required by the UK Government will likely reduce the populations of even those birds that are well adapted to city living."

It's of course obviously the case that not all non-human life thrives near humans. It's good to know there are rural areas as well as areas like where I live. And it's great to know there are wilderness areas and set-asides and all that, too.

But the simple truth of the matter is that it is in suburbia that most civilized humans experience the most "nature," the most wildlife.

Some of it we call nuisance. But hey: take it where you can get it. Stop and eat the roses. (That last line is for those rats on stilts out there.)