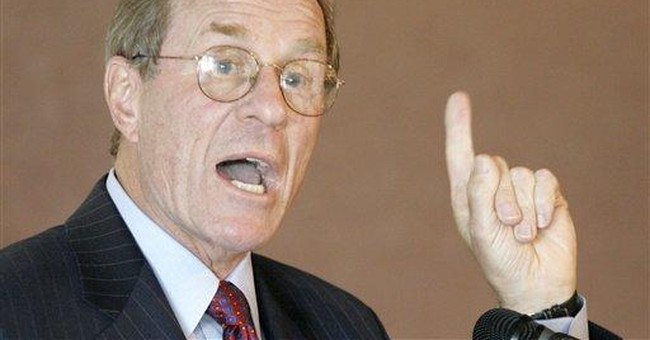 I am trying, trying hard to imagine what a "zoning emergency" might be. Is a slaughterhouse about to fall into a swimming pool? Is a dam about to break?

Maybe you have a better imagination than I; maybe you won't recoil like I did at a statute passed by Oregon's state senate.

Senate Bill 823 — passed 23 to six by that august body — sets out to prohibit all development on or within spitting distance of the historic Oregon Trail running from the state line to the city of The Dalles. It's quite a bite out of the future, for the sake of the past.

And it strikes me as utterly absurd.

But, even if it were not, on the face of it, a stupid and intrusive law, a usurpation, nothing more than plunder tarted up as a never-ending history lesson, how could it be construed as an emergency?

SECTION 3. This 2007 Act being necessary for the immediate preservation of the public peace, health and safety, an emergency is declared to exist, and this 2007 Act takes effect on its passage.

The senate's act would prohibit Oregon's no-doubt equally august zoning bodies from ever approving any application for a permit — or any other development approval — to change a current land use at any location within 100 feet of the route of the Oregon Trail.

The senators in their debate, I'm told, gave no real context of the emergency character of their notion. They just added the section. It's the thing to do these days. We live in "emergency-oriented" times.

Steve Buckstein, of the Cascade Policy Institute, noted the cavalier way the solons thought through the bill. "[N]o one realized during the Senate debates that there were serious unintended consequences of such a feel-good bill." Fortunately, Buckstein publicized the thing, and by the time it got to a committee of Oregon's House of Representatives,

no one testified in support of the bill as written. Property owners showed up to explain how this bill would prohibit them from even remodeling their own living rooms because their homes sat on a trail used by their ancestors 150 years ago. Others testified how the bill would devastate their farming operations, even on stretches of the Trail where there were no remaining physical signs of the covered wagons that traveled there long ago.

At the heart of the bill lie two very distinct things: sentimentalism regarding history, and, as Buckstein astutely noted, a betrayal of that very history: "The Oregon Trail was all about progress, opportunity, and the right to own and control one's own property." But

if this bill becomes law, it will add a dark chapter to the Trail's history. It will tell future generations that we turned our backs on some of the very values the pioneers risked their lives to achieve along the Oregon Trail.

Of course, the people of Oregon are much saner than their representatives. They know that the present and the future are more important than establishing unalterable trails in honor of one makeshift trail that began their history.

If you don't believe that this law — which now has a chance of failing to pass the House, thanks to activists like Buckstein — is a good example of stupid lawmaking, then go back to Section 3. The emergency clause. There's no excuse for that. It is an abuse of language and privilege and . . . well, the trust voters gave them.

They should be ashamed of themselves, all 23 senators who voted for the bill.

Most probably aren't. In fact, I bet they think themselves clever folk.

Why add the emergency clause? Well, root around the Oregon Constitution and you'll catch on. An emergency clause enables the law to take affect as soon as it goes through both houses and the governor. All other law must wait 90 days after the end of the session in which the law is passed. It turns out that the people of Oregon can subject any law to a voter referendum, that is, "to approve or reject any election or Act, or any part thereof" so long as that law "does not become effective earlier than 90 days after the end of the session at which the Act is passed." Get it? Adding an emergency clause proves merely to be a tricky way to keep Oregon's laws out of the purview of Oregon's voters!

So now I'm trying very hard not to call these politicians "evil" and be done with it. The truth, though, is more complicated. Almost any citizen can become corrupted by systems of power. Philip Zimbardo's prison experiments and recent book The Lucifer Effect do more than suggest this.

We have to realize that power corrupts — whether in Abu Ghraib or in Salem, Oregon, or Anytown, USA. We must keep prison guards and senators (and even dog catchers) on a short leash. They should be reprimanded when they do bad, and they should know that abusing their positions just doesn't pay. They need limits. Rules. Term limits, even, in the case of senators.

If we don't, every act will entail some sort of emergency . . . for citizens, if not the politicians who would control our every move.