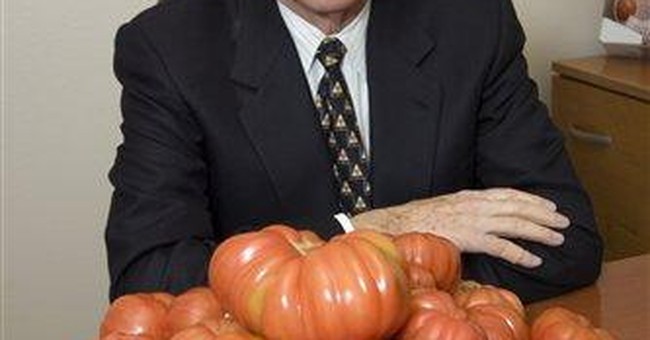 Attention Naomi Wolf: a federally mandated state trade organization discriminates against Solanum lycopersicum on the grounds of appearance. No ugly ones allowed. The Beauty Myth . . . and about tomatoes!

This week the Florida Tomato Commission hit the news again. It got beat down, just a bit, by the federal government. But not on the grounds that the wolf peach, the dreaded "love apple" — that is, the tomato — deserved protection from narrow-minded Florida bigots. Oh, no. Pretty soon all Americans will be able to enjoy the fruits of a slightly opened-up regulatory scheme. But our dark days are not over.

The roots of discrimination live on.

Yup, the Florida Tomato Commission is hung up on beauty. And that is bad. You can't judge the taste of a tomato by its shiny, red skin. That's somethingism, isn't it? Skinnism? Shinyism?

Not surprisingly for these Outer Beauty Bigots, the Commission's website is mighty pretty. But this is mainly the result of featuring their product, the luscious tomato, as the main design element.

I admit it, though; the site's FAQ contains some good information. Wandering netizens can find some recipes and advice on storing, preparing, and preserving tomatoes. Very good. No complaints.

But the Commission does have a problem. It is obviously a marketing organization. So the most basic truth about tomatoes remains noticeably absent: The best tomatoes aren't from Florida.

The best I've ever tasted were home grown. Picked off the vine. Or bought at local farmers' markets. Or at stands by the roadside. In New Jersey. In Virginia. In Arkansas. California. I travel. I eat tomatoes. I know.

But I still buy tomatoes at the grocery store. And many, many tomatoes do hail from Florida. So the Florida Tomato Commission almost directly affects my quality of life.

And yours, if you know what's good for you.

Of course, there's the rub. The U.S. government and the Florida Tomato Commission don't believe you know, or can know, what is good for you. Not without their help. They just have to get involved. Quality of food, you see. You must be protected from unscrupulous tomato growers.

Who? Well, the dread Procacci Brothers of Philadelphia, whose Florida subsidiaries grow the UglyRipe tomato.

You see, the UglyRipe doesn't look like the smooth tomato we're used to in the supermarket. It has more creases than Boris Karloff's facial in The Mummy. But a lot more edible. Really. Nice and red.

And, I'm told, it puts standard Florida tomatoes to shame.

The Florida Tomato Commission has been fighting the UglyRipe for years. It's the job of the commission to make sure that consumer tomatoes conform to minimum sight-test standards. They have to look good. Taste? Well, de gustibus and all that. (That's Latin for "kiss off.")

According to law, Florida growers have not been allowed to sell ugly-looking tomatoes, no matter how good they may taste, to out-of-state consumers. (The ugly ones go to make ketchup and salsa, I think.) After all, what if consumers got wise and came to realize that many of the best tomatoes don't look like the pristine smoothies of the past?

Well, then the jig is up. If consumers get to decide everything, then what use is the Florida Tomato Commission?

Good question. Such commissions exist all over the country, and number in the hundreds. Thousands. They are creatures of the state. Though justified in terms of consumer aid, they are really just cartels. Their basic purpose is to weed out . . . not the bad tomatoes so much as the competition.

But even the U.S.D.A., the division of the federal government that rides herd over the fascistic array of guilds and leagues put upon the market by the crafty gents of FDR's Brain Trust, has a modicum of sense. It recently overruled Jeb Bush and the Florida Tomato Commission and gave the green light to the UglyRipe.

Joseph G. Procacci, head honcho of the people bringing the UglyRipe to market, has been quoted as saying that "Thanks to the U.S.D.A., consumers can now have the midsummer goodness of the tomato season all year round."

Hmmm. I would be more likely to thank Mr. Procacci himself. The U.S.D.A. is merely getting a bureaucracy out of the way. But, had the bureaucracy not existed, we'd have been eating UglyRipes for years now. This is like thanking a mugger when he stops beating you. Our appreciation is there, but muted.

According to the New York Times, Florida's Commission fears that "the new ruling could create a precedent that might allow inferior tomatoes to get to market." Oh, horrors! What will consumers do? (Maybe, uh, learn how to tell a good tomato from a bad'n.) But the Times reminds us that the government is still watching out for us: "[T]he rule change applies only to UglyRipes, whose authenticity must be verified from seed to distribution under a new Agriculture Department heirloom program."

So other upstart tomato improvements will have to fight it out all over again. Yeah, Times, yeah, U.S.D.A.: thanks for the help. Sheesh. (Just where did I put those rotten tomatoes? They're still good for throwing.)

The idea of a membership organization, both of the consumer and producer varieties, ain't necessarily bad. But by all that is ripe and juicy, let them compete for loyalty. Let them add value to the market process. Let them build websites, grade products, establish standards. But those standards must compete as much as the products and the producers and the consumers themselves. There's no one-size-fits-all solution.

The Florida Tomato Commission should have no more federal or state power than the Lollipop Guild.

Hey: I love cherry tomatoes for snacking. Slicing up a newly ripened beefsteak tomato and adding it to a sandwich is itself a delight. Sometimes, if the tomato is especially good, I skip the sandwich.

You may not be so thrilled. Tastes differ. I know. But surely we can agree to disagree. And agree on the market as the best arena for our disagreements. You say tomato, I say to-mah-to . . . and the Nahuatl say tomatl. But it's the Florida Tomato Commission that says a big NO to taste as such. Let's call this regulation biz off.