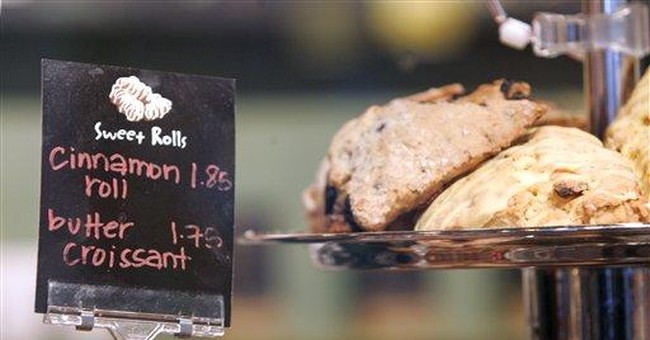 Once the Christmas lights, ornaments and knickknacks were packed back in the basement and the college football bowl games over, I was struck by a very strange thought: our government tells us what we can and can't eat.

Perhaps you've read about it: The New York City Council's ban of food containing trans fat. And the bans that may follow in other towns, and for other foods. In fact, heaven forbid, for my favorite food, the kind that grows on the Liberty Tree.

Maybe I was snacking more than I should have been during the holidays, especially when my teams were losing. (And I may sue the inventor of Hello Dolly's). But my vice doesn't make a virtue of the Big Apple's totalitarianism. Even Orwell's Big Brother permitted Winston Smith to smoke cigarettes and drink gin!

Sure, trans fat isn't good for people. I get that. But the same goes for soda and cotton candy. And butter. The point is that in a free society, what one puts into one's mouth is each person's responsibility, each person's right.

On the other hand, rights schmights, why not just outlaw being fat? Those of us whose percentage of body fat goes above a certain threshold would be sent to camps where we could concentrate on losing weight.

We could call these "concentration camps."

The Yellow Star Proposal
But, as we enter 2007, fatty foods and eaters' rights aren't the only targets of nanny-state politicians: they are attacking our delicious democracy, too.

Legislators and entrenched lobbies in a number of states are proposing that the voter initiative process be gutted, fried and devoured. Why? Those states' citizens showed the temerity to threaten them with initiatives to cap state spending growth.

• A new group comprised entirely of Michigan's political high and mighty, amusingly called "Citizens for Michigan," has proposed doing away with voter initiatives entirely. Barring complete abolition, they suggest that legislators should at least be given the power to veto any measure proposed by Michigan citizens.

• In Montana, politicians are pushing to deny citizens the right to effectively hire people to work on petition drives. The proposed law would not allow petitioners to be paid by any formula relating to the number of signatures they collect. I guess pay would be based on what, their good looks? There are also attempts to block petitioners from polling places and a myriad of other changes all designed to prevent successful petition drives. According to one proponent of the changes, Democrat Attorney General Mike McGrath, "It takes 26 pages of legislation so that the process will be simplified."

• The most in-your-face slashing of citizen rights would be Legislative Bill 40 in Nebraska, introduced by Diane Schimek. It could be called the Yellow Star proposal. Anyone daring to exercise his or her First Amendment right to petition would be required by Shimek to wear a large badge in public that would detail personal information. That, in addition to a brief description of the measure "in a print size and style easily read by a petition signer." Small-framed people might not be visible behind such a large badge. Fortunately, the U.S. Supreme Court years ago struck down a similar abominable law out of Colorado.

This is all backlash. Our out-of-control governments — where politicians and special interests run wild, enriching themselves with our tax dollars while ignoring the long-term health of our states and nation — don't like it when we step in to fix their messes. They like their messes. Which provides all the more reason for more citizen initiative and referendum, more voter control of politicians. Currently, voters have initiative rights in only 24 states, and in nine of those states legislators can still override the people.

Somehow, the politicians and special interests see it differently. They think the problem is citizens who butt their noses into the government's business, instead of doing as they're told. To them, the answer is to further remove citizens from any say-so. Their every "reform" shouts it from their lofty rooftops.

Skeptical of Wizardry?
If you've read my column this past year — or my free Common Sense e-letter — you know the foibles of some of those who would tell you what you can eat one minute and to shut up, pay your taxes and put down your petition the next. You know about, say, stick-up artist and Colorado legislator Deanna Hanna or 50-year politician Donald Schaefer, Maryland's Grandpa Letch. Or any number of jokers in Congress.

Sometimes there are little signs that government has gotten out of control. We all have to wear the same uniform. Or the government tells us how many kids we can have. Or what we can eat at restaurants.

And then there are the larger signs. In mid-December, probably about the time I was picking out a putter as a Christmas present for my daughter, some guy named David M. Walker sends a little letter to President Bush, the Senate president and the Speaker of the U.S. House. Beyond a strong middle initial, Walker has the title of Comptroller General of the United States. Walker added up all the promises already made by politicians and concluded that: ". . . the federal government's fiscal exposures totaled approximately $50 trillion as of September 30, 2006, an increase of $4 trillion over September 30, 2005, and up from about $20 trillion as of September 30, 2000."

It's just the beginning of the 21st Century — we've barely walked over Clinton's stupid bridge — and the current solons have already piled up 150 percent more debt than all the lousy big-spending politicians we endured in the last century.

A tad depressing, no?

And yet, I'm not crying in my beer. Partly because beer aggravates my sinuses, but also because I'm pretty optimistic about the desire and ability of the average American to check our government and restore a critical measure of citizen control.

I'm not suggesting it will be a snap. The powers that control government in order to pillage the taxpayers for their personal gain will not relinquish their death grip on our freedom without a fight.

But they'll get a fight. This we know. Because we — that is, you and I, and your friends, and whoever will join us — will make it happen.