As Long As You're Healthy... 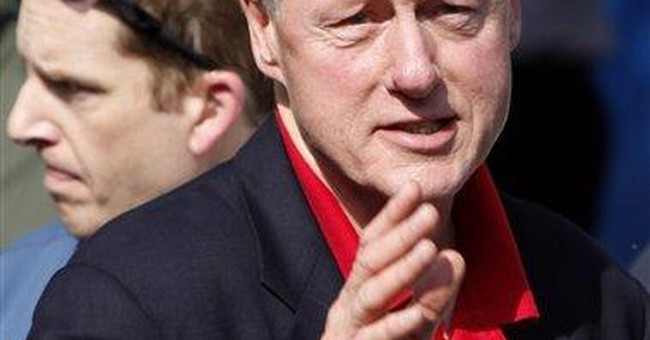 The only problems Bill Clinton has ever had with his heart have been physical ones. That thought occurred to me after the latest Breaking News story about his checking into the nearest hospital for a couple of stents, and promptly checking out to do the most unaccustomed thing in the world for a Bill Clinton: take it easy at home.

Nobody who's ever been in a political campaign with or against Bill Cinton, or watched him raise funds to clean up after disasters around the world, or just watched him playing hearts, could have any doubts about his having heart.

The man puts all he has, if not more, into whatever he's doing at the time, whether it's jogging, eating, wenching, talking about the Next Big Thing, politicking, even critiquing somebody else's politicking, golfing a la Mulligan, attending the annual 'coon supper at Gillette, Ark., which is a must for political candidates in Arkansas, sermonizing at a black church, or spearheading relief efforts for Haiti.

Speaking of Haiti, it continues to be less a country than a perpetual disaster zone. Its overburdened people are still struggling to absorb the aid that's been sent there from all over the world. Now continues to be the time for the Great Power in the neighborhood to act as a Great Power should when a small neighbor is stricken. Forever-plagued Haiti needs not only help but help delivering and organizing that help. It'll be good to have this most energetic of presidents and then of ex-presidents back leading the world's efforts to do what can be done there. In the meantime, sir, take it easy for once. And concentrate on Job One: getting well.

As we in Arkansas well know and the country soon learned, Bill Clinton never stops till something stops him, and then it may not be for long. He's a kind of one-man Tea Party, center-left edition. A combination of "Mr. Smith Goes to Washington," Andy Griffith in "Face in the Crowd," and one-person wonkfest all rolled into one big ol' ball of energy.

Bill Clinton could have stepped out of a Southern novel and by now has been the all too identifiable inspiration for a couple of them. Does he ever slow down even if he needs to? Whether he's being honored or impeached at the time, he's always completely involved.

His greatest challenge now may be to just light, as we say in these latitudes, at least till he catches his breath and is off and running again. He's probably already on the phone dictating memos, talking to buddies and planning his next big move, probably all at once.

Here's my advice, not that Mr. Clinton has ever taken it. It's what Mama would say, and often did: As long as you're healthy ... you can be happy, wealthy, wise or whatever you want to be. But health comes first. Get well and then get back to making good news instead of scaring us all half to death every time the docs decide your heart needs a little more work.

Even the most high-powered sports car needs regular check-ups, especially the most high-powered sports cars. Their engines, like Bill Clinton's, get a lot of revving. Now it's time for him to rest up if he can stand it. At least for a day or so. Then, Lord willing, he can produce his next high-minded speech or low outrage. Whichever is, or both at the same time, it'll be good to have him back in the headlines in some context other than medical. We columnists need the grist.