How to Play Both Sides of an Issue 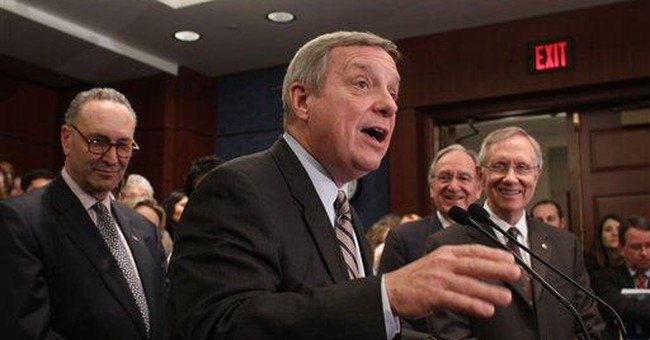 It's got to be about the oldest dodge in the book: When a politician casts a momentous vote on a major issue, and doesn't want to take responsibility for it, the pol minimizes its importance. The folks back home are told it was just a little ol' procedural vote, and they needn't worry their pretty little heads about it.

Blanche Lincoln, the senior senator from Arkansas, has got this routine down pat. When the showdown on the health-care bill came Saturday night, she cast the deciding 60th vote to cut off debate on whether to let this huge hodgepodge of a bill advance to the floor of the Senate. It could prove the most significant vote of her otherwise unremarkable political career.

Once debate on whether to proceed with this ever-morphing blob of a bill is cut off, as it now has been, the Democratic majority in the Senate won't necessarily need a super-majority of 60 votes to pass it. A bare majority of 51 would suffice, although another procedural hurdle could quite likely require the Democrats to muster another 60 votes in the Senate to make the most radical change in the nation's health-care system in decades. And it will be Blanche Lincoln's vote that made it all possible. Much as she might try to deny it.

The senator says she's against a public option -- that is, a government-run insurance scheme with all its dangers to private insurers, and to workers who could be dumped into it by employers unwilling to go on paying their employees' insurance. Yet it may be Blanche Lincoln's vote that opens the way for just such a drastic change.

Despite all our president's glib assurances, Gentle Reader, few things might remain the same about your health insurance once such a bill becomes law. And that includes your choice of doctors and treatments, your Medicare or Medicaid or private health insurance, or anything else to do with your health care. The changes may be put off for a few years, but changes there would be. Big ones.

Then there are all the taxes, fines, subsidies and other complications such a bill could rain down on the American economy. That's no small thing, for the health-care industry represents a sixth of that economy. And all these changes would come when the country needs stability and steady growth, not more drama and uncertainty. The message of Saturday night's vote in the Senate: Tighten your seats belts, folks. This could be a bumpy ride.

No wonder people are nervous about this dramatic transformation of the American health-care system. As broken and bureaucratic as that (non)system already is, more layers of expensive bureaucracy and impressive deficits aren't likely to fix it. The American people know that. You can almost feel the groundswell of concern, not to say anger, about what this 2,000-page bill would mean, which is not at all clear.

The surest result of all that uncertainty could be a strong reaction against those senators who let this new and troubling approach to health care become law -- senators like Blanche Lincoln.

Yet the senator tried to depict her vote as no big deal -- just a vote on a procedural matter, "nothing more or less" than that. But the senator has got to know full well that procedure can be all when it comes to determining the outcome of a congressional debate, and in this case it is.

As a senator, Blanche Lincoln has always had the soul of an administrative assistant. She knows the wheels and gears and levers and hidden passageways deep in the great legislative machine, but not necessarily its purpose -- except of course to maintain itself and those who operate it. Nothing better illustrates how a narrow expertise can become the enemy of wisdom than this vote of hers Saturday night. Now she'll have many a morning after to reflect on its consequences. And so will the voters of Arkansas.

Whatever the ramifications of the new health-care system that finally emerges from all this confusion, Blanche Lincoln and her fellow Democratic "moderates" are going to be responsible for its passage. And no amount of talk about how they cast only a "procedural" vote is going to hide the fact that their votes let this thing get to the floor of the Senate.

As for those on the other side of the issue, they may not be happy with Sen. Lincoln's attempt to straddle the issue, either. They object to her saying she opposes a government-run insurance system. And in return they will oppose her.

It happens to politicians who set out to please those on both sides of a highly contentious issue: Instead they can wind up offending both sides. A fate they richly deserve.

Instead of taking a clear stand for or against this whole developing blob of a health-care bill, Sen. Lincoln may have waffled her way into political trouble -- and evoked the ire, or at least contempt, of the electorate. She may have been so slick this time she's outwitted herself.