Of Shame, Folly and True Grit 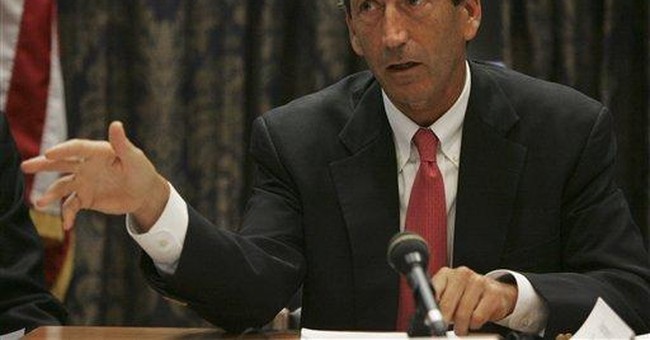 Another high-profile politician now wishes he had a lower one. Another public figure now wants a "zone of privacy." At least when he himself isn't sharing his mawkish confessional with the whole world. The human comedy, inseparable from the human condition, persists. And how. And so does its primary stage, politics. Nothing changes except the poor sap reciting the familiar, apologetic lines. Same script, newest actor. Every lover thinks he's a poet, and every broken-hearted one imagines himself a tragedian.

"Affair took S.C. governor away," said the headline in the paper. Indeed it did -- far, far away, and not just geographically. Mark Sanford is now in a whole different place, social and political and personal. As you could tell by even a fleeting glance at his doleful countenance on the flickering screen that shows no mercy. Television transmits our every word, expression, painful grimace and tearful moment. And it's always revealing something different from how we see and hear ourselves. It's like one of those strange Diane Arbus photographs in which you can tell both how the subject wanted to look, and how, alas, he really does. Talk about cruel and unusual punishment. Only in this case, it's administered by the subject himself. And he's different afterward. Forever.

The old Mark Sanford is no more. He's been chewed up and spat out before our eyes, if we could bear to watch, by this new, extremely uncomfortable one. Why, you have to wonder, would anyone do this to himself? And to what remains of his family.

It seems only a little while ago that Mark Sanford's name was being bruited about as a vice-presidential pick, then as a presidential possibility come 2012. A fiscally conservative governor from a socially conservative state like South Carolina, he was riding high. But in a story as old as folly, as familiar as hubris, he's now meat for the tabloids.

It is the fortunate indeed who realize that the joys of adultery, if and whatever they may be, cannot compare to the delights of fidelity -- that endless garden from which the lucky do not stray.

What more can be said about this old, old story? Didn't Shakespeare say it all? "Oh, what fools these mortals be!" It seems to be in our DNA. And now a lot more than the governor's midsummer night's dream is over as Mark Sanford joins a large and regretful club.

What more can be said is this: It's not just the governor who has been hurt by his indiscretion, to lapse into understatement, but all those others affected by any case of double adultery. Which pays even more in sorrow than double indemnity does in compensation for a loss.

I knew it was a small world; I'd forgotten how much like a small town it is. And every time the story repeats, some of us think of the innocents who also pay the price. The spouse and children.

Just about the only good to come out of such headlines may be the example it provides for others -- of high, low and in-between estate. An example to beware. The slow types will have to learn the painful, first-hand way. Experience runs a dear school, but some will learn in no other.

What strength those betrayed must now summon. To quote the estimable Wilfred M. McClay of the University of Tennessee at Chattanooga, a student of the American character or lack thereof, "the world is full of loyal and resourceful political wives who show far more grit than the marquee figures to whom they are married."

The only addition I'd suggest to the professor's all too apt observation is that it doesn't apply to just political wives.

A concept like grit -- a concept Mark Twain and other writers of the 19th century used to call sand -- doesn't get the use or admiration it once did. Which explains a lot about the state of American society. And why, instead of so much talk about Hope, Audacity and Change, it would be a good sign if Grit would get equal -- or greater -- billing.

Robert Henri, an American artist of the Ashcan School of the last century, when grit may have been more appreciated, defined it best without needing to use the word: "Do not let the fact that things are not made for you, that conditions are not as they should be, stop you. Go on anyway. Everything depends on those who go on anyway."

In the rash of tabloid headlines and TV talk shows that now have a new subject to devour, discard and then replace within 24 hours or maybe 24 days at the most, it is the families some of us think about -- and hope they will go on anyway. Because everything depends on those who go on anyway.

(Recommended Reading: "An American Virtue" by Wilfred M. McClay in the Spring 2009 issue, The Grit Issue, of "In Character: A Journal of Everyday Virtues," sponsored by the John Templeton Foundation.)