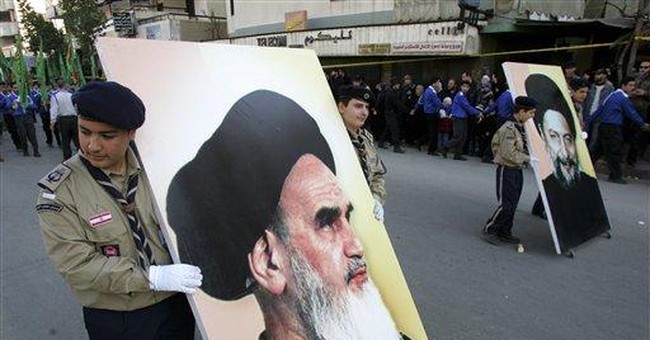 What perfect timing. The wire service photo showed an honor guard in Hungary commemorating the reburial of Imre Nagy two decades ago.

Comrade, then Freedom Fighter, Nagy had been the leader of Hungary's ill-fated uprising against its Soviet masters back in 1956. The Hungarians' bravery attracted the sympathy and admiration of the whole world that year. But little else. Fearful of risking a nuclear confrontation, America and the West shrank back. Once again Communism produced a wave of talented and productive refugees, and then silence descended.

As for Imre Nagy and his fellow rebels, their fate was what one would expect in a slave empire: They were arrested, tried in secret and hanged. And then buried in unmarked graves. Only the memory of a brief freedom still burned in Hungary, far below the surface of things. Few at the time realized that one day it would flame again.

Imre Nagy was a good Marxist till the end. He and his comrades had been faithful to the Party till they could no longer close their eyes, or their hearts, to their country's oppression. They had hoped for a peaceful break with the oppressors, or that the Americans would arrive at the last minute and save the day, like the U.S. Cavalry in a Western.

They hoped for too much. And paid for it. Nikita Khrushchev and ruthless company in Moscow were not about to let them take Hungary out of the Warsaw Pact, or even live. Their example might have proven contagious, and the rest of the Soviet bloc was restless, too. So it was decided they would provide a different kind of example: This is what happens to those who dare challenge Soviet power.

Decades passed. The ritual observance of Captive Nations Week in this country was derided as an annual exercise in futility. Also, a danger to Peaceful Coexistence, which had been elevated to a goal of American foreign policy, taking the place of freedom. And any real peace. Even to speak of these nations' captivity struck our intelligentsia as a dangerous provocation. Detente became the objective, not peace. A president who spoke of peace and freedom, like Ronald Reagan, was considered an "amiable dunce" by the sophisticates. The Kissingers and Fulbrights had become our leading lights, or at least leading dimnesses. But a tide was rising in the world, and it was a freedom tide.

Then, like a sudden, cleansing flood, came 1989, the great Jubilee Year when the Iron Curtain cracked. Russians Go Home became a reality instead of an impossible dream. In a free Hungary, Imre Nagy and his fellow patriots would at last be given a decent burial. With full honors. At last their heroism could be openly recognized.

Much like Imre Nagy, the leaders of the Silent Revolution in Iran have also been faithful servants of the regime. They, too, are proud nationalists, but not crazies. They seek only the simplest of rights, like free and fair elections. They accept the mullahs' reign and reins. They understand they live in a theocracy. But they would like to reform it, and give it a human face, much as Mikhail Gorbachev set out to reform Soviet Communism, not realizing that to humanize it would destroy it.

Liberty is not something that can be rationed; one freedom leads to another. Iran's demagogue-in-chief understands that old truth, which is why he is so determined to crush this peaceful revolution in today's Iran. All the odds are in favor of his doing just that, but Mahmoud Ahmedinejad has already lost something far more important than Iran's presidency; he has lost legitimacy. His hands are covered with the blood of Iran's martyrs, and the list grows daily.

Mikhail Gorbachev, too, held on to the reins of power. For a while. But the irresistible attraction of freedom has a way of being underestimated, which was Comrade Gorbachev's decisive error. A little glasnost and perestroika -- openness and reform--has a way of leading to a lot. And those who open the floodgates just a little may be swept away by what they have loosed.

Now the world watches and waits for another revolution to be crushed. The president of the United States offers little but lip service to freedom's cause, and even that is tardy, hesitant, fearful, as if another people's thirst for liberty were some sort of embarrassment, an obstacle to his plans for a Grand Bargain with a dictatorial regime. A threat to, yes, peaceful coexistence, that old simulacrum for real peace.

No wonder Mahmoud Ahmadinejad struts as the world only watches and waits. Time, he must think, is on his side. Surely nothing can keep him from having his own nukes soon, just like Kim Jong Il in North Korea. Surely the police state in Iran, with its controlled media and government goons, will suppress this revolution, just as that earlier one in Hungary was stamped out.

But looking at the picture of that statue of Imre Nagy now in a place of honor in Budapest, it is hard to lose hope. A generation or two from now, whose likeness will be in Teheran's great square? I don't think it'll be Mahmoud Ahmadinejad's.