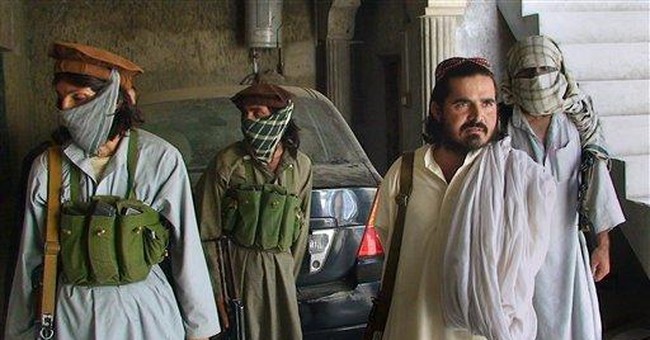 Tuesday, September 11, 2001. A day full of shock, anger, fear. And confusion. The country was under attack. And at first it wasn't even clear who had attacked us.

The identity of the attackers became clear even as the fires still raged: This was the work of the same bunch of terrorists who had tried to topple the Twin Towers back in 1993. Back then the killers had been treated as defendants in federal court, with all rights and privileges pertaining thereto. They would be convicted only after a lengthy and arduous trial. As if theirs had been not an act of war but a violation of the criminal code.

Now we had been attacked again -- by the same fanatical enemy that had struck our embassies in Africa, and attacked the USS Cole just a year before off Aden, killing 17 American sailors.

And again we had been caught unprepared.

Sometime during that swirling day, in the midst of all the madness, I had a column to write. The only catch: It was supposed to make sense. Maybe even suggest a course of action.

When in doubt, plagiarize. Excuse me, research. And what better source to crib from than the ever energetic, not to say frenetic, Teddy Roosevelt? In his time, specifically 1904, an American businessman of uncertain citizenship, Ion Perdicaris, had been kidnapped in Morocco by the last of the Barbary pirates, the Sherif Ahmed ibn Muhammed Raisuli. Talk about a name to conjure with!

TR was not impressed. He promptly dispatched (a) a naval squadron to Tangier, and (b) a telegram offering the kidnappers a choice: "Perdicaris alive or Raisuli dead."

Bully for him! After many a complication and some comedy, Mr. Perdicaris would come home to a White House reception. End of incident.

In 2001, the culprit had an exotic name, too: Osama bin Laden. He was thought to be somewhere in the mountainous terrain of Afghanistan at the time (and may still be) under the protection of the Taliban. Borrowing a leaf from Teddy's book, I wrote a column suggesting that the American response to the attacks that day ought to be just as clear and concise as TR's had been: Osama alive or the Taliban dead.

Bully! Another column out of the way. Remarkable how one borrowed idea can be stretched into 800 words or so.

But wait. For there's many a slip 'twixt writing and publication. An editor at the syndicate called to say there was a problem.

Oh, really? What was it?

Well, his boss had noted that Osama bin Laden and his gang, aka al-Qaida, hadn't been convicted or even indicted for this crime. Therefore, his supervisor wanted to know, how could I write that al-Qaida was responsible? And for no better reason than it was obvious.

The country was now at war but at least one hotshot editor in Chicago was still thinking like a civilian. Which was not a comfort.

To calm myself, I chose to meditate on the final scene in "The Bridge on the River Kwai," the David Lean film in which Alec Guinness plays the correct British colonel and prisoner of war who's completely lost touch with the larger reality, i.e., the war he's supposed to be fighting. Instead, he has concentrated his mind and efforts on the fine railway bridge he and his troops have built for their Japanese captors in the middle of the jungle. Good show, old boy!

The proper colonel can only watch in horror and dismay as his proud handiwork is destroyed by Allied commandos. His is a madness within the greater madness that is war.

The final words of the film occurred to me when I was warned of the legal risks I risked by accusing the obvious perpetrator of all this mayhem without proper documentation.

After a polite if pointed conversation with my editor's editor, the column's reference to Osama bin Laden was retained.

Still, it would have been a consummation devoutly to be wished if Mr. Bin Laden had indeed shown up to file suit for libel. What a pleasure it would have been to meet him, complete with a welcoming committee from the CIA, FBI, and 101st Airborne, and maybe even get a chance to interrogate him--excuse me, interview him--en route to Guantanamo.

The words linger in my mind -- Madness, Madness! -- and recur every time various lawyers, including the current president of the United States and commander-in-chief of its armed forces, proceeds to explain why we need to follow the rules of criminal procedure in this war rather than the laws of war.

President Obama continues to speak of his predecessor's decisions as "the policies that got us into this mess," even as reality obliges him to adopt them one by one. Whether it's reviving the use of military commissions to try terrorists or keeping tabs on international phone calls or declining to release inflammatory photographs of interrogations. By now he's even following much the same strategy in Afghanistan -- the Surge -- that finally turned things around in Iraq.

But our still new president proposes to close the military prison at Guantanamo by a date certain -- the end of the year -- without having decided just what he's going to do with its occupants. A minor detail.

This president and lawyer can explain his legal rationale at length, plying his profession in the midst of the continuing chaos of war. Listening to his dulcet tones, I think of that single-minded British colonel focusing on his own profession, civil engineering, and building his little bridge in the midst of the jungle, war or no war, and can only think: