Eyeless in Gaza, or: Waiting for the Smoke to Clear 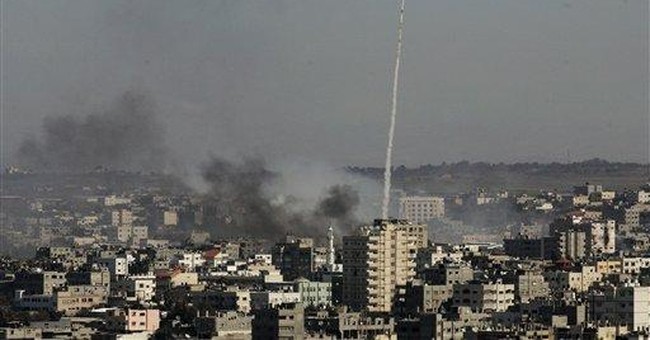 Who's winning, who's losing in the latest unpleasantness in the Mideast?

It's not always easy to tell, for all sides seem to occupy alternate universes in which war is peace, terror is resistance, and nothing is more malleable than the facts, for all concerned seem to have not only their own facts but their own vocabulary.

For now any peace or facsimile thereof in Gaza and Israeli environs will have to wait till the fog of war clears, and even then such a truce may prove only a lull before the next war. That's the Middle East, as they say with good reason. For in that part of the world, history seems largely indistinguishable from a tragedy that may have intermissions but never an end.

And so the suffering goes on. The big losers are the innocent civilian populations on both sides, held hostage by the uncertain forces of war:

Border cities in southern Israel, especially battered Sderot, have been subjected to a rain of rockets over the years since the Israelis pulled out of Gaza, hoping for peace and getting war instead. Just as those Israelis who once lived there warned as they were being dragged out of their homes by their own army.

As for Gaza's teeming, hemmed-in population, its suffering is a constant. Only the intensity of it seems to vary over the years -- from the toll that endemic poverty takes in the "good" times to the hundreds of violent deaths bound to result when Hamas deploys its rockets deep in the shadowy alleyways of the casbah that is Gaza. Result: apartment buildings, mosques, and even hospitals become targets. And the whole, thickly populated anthill called Gaza (population 1.5 million, squeezed into 140 square miles) goes from a staging ground for war to a battlefield.

"War is hell," said an American general named Sherman, "and you cannot refine it." His name is still cursed in these parts yet, as he told Atlanta's local officials as the city burned, "those who brought war into our country deserve all the curses and maledictions a people can pour out." For it was not he who began that war, as he was quick to point out -- a minor detail that those who suffered from his bringing the war home tended to overlook. Now another army drives to the sea, another city burns, and war remains hell.

Like all other wars, this fresh hell must eventually move into the diplomatic arena to be settled. Developments there, or the lack thereof, will be the surest reflection of the balance of forces on the ground. Till then, international demands for a cease-fire will vary in inverse proportion to the progress of Israeli arms. It's an historic pattern in the Mideast, and there is no reason to think it will change now.

Only when its clear that Israel isn't facing defeat will its adversaries agree to a truce. It happened in the Six Day War of 1967, the Yom Kipper War of 1973, and again in Lebanon only a couple of years ago. Only after Hezbollah's section of Beirut was reduced to rubble, and that country's population became hostage to both sides, did the fighting conclude indecisively.

Now the United Nations and the world's diplomats scurry about attempting to patch a peace together in Gaza. There were no meetings of the UN's Security Council, no hurried missions to the Middle East by the French president, no effective diplomacy at all so long as Hamas' rockets were falling on Israeli towns. Only when the Israelis decided, after issuing repeated warnings, that if there was to be no peace in Ashkelon, there would be none in Gaza, either, did the UN spring into action.

The surest indication that Israeli forces have managed to suppress or at least significantly degrade Hamas' capacity to wage war will come if a cease-fire is hammered out -- one that constrains Hamas, too, and not just the Israelis. A cease-fire that would be enforced by UN forces, perhaps a makeshift international force, or even Mahmoud Abbas' Palestinian faction on the West Bank, where an uneasy peace still reigns and a two-state solution slowly, painfully slowly, begins to emerge.

'Tis a consummation devoutly to be wished -- a real, enforceable cease-fire rather than a unilateral one, but it's not likely till Israeli forces have achieved their aims, or seem on the verge of doing so. At that point, if the historical pattern holds, and surely it will, those who have been holding out for a truce that would apply only to one side might agree to make it bilateral. But not till then. Till then? Suffer, little children.

Princeton Professor: No, Math Isn't Racist – But Wokeness Is Dangerous
Townhall
Snopes adds some important context to Alexandria Ocasio-Cortez's tweet on McDonald's and Denmark
Twitchy
Designer of CPAC Stage, Accused of Looking Like Nazi Symbol, Is Identified, Kicker Is Who They Are and For Whom They've Worked
Redstate
CAUGHT COLLUDING: Leaked Video Reveals Family Court Guardians Conspiring to Dox Journalist for Exposing Them
PJ Media