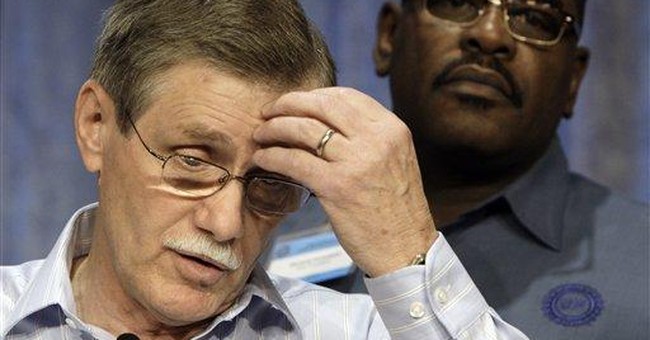 It might have been a vision of the future borrowed from "Modern Times," Charlie Chaplin's classic protest against the industrial age. Made in 1936, the almost silent movie still speaks powerfully. Whether as comedy or tragedy.

Perhaps its most famous scene is the one in which Charlie, aka The Little Tramp, is caught in the maw of a giant conveyor belt at the Electro Steel Corp., where he's supposed to tighten the same bolts on the same widgets in the same way at the same rate as they pass by in endless succession. At last, man had become machine, or at least part of it.

The machine never stops, even feeding Our Hero to keep him on the job. It eliminates any need for him to think. He's become just another cog in its works. But when Charlie pauses to brush away a fly, or just itch and scratch, the result is (1) chaos on down the production line as the clockwork system is thrown off pace, and (2) a pink slip for Charlie.

The whole, tragicomic scene came back on reading Vanessa O'Connell's story in the Wall Street Journal on the not-so-newest thing in retailing: "Stores Count Seconds to Trim Labor Costs." Here's how it begins:

"SHELBY TOWNSHIP, Mich. -- Daniel A. Gunther has good reason to keep his checkout line moving at the Meijer Inc. store north of Detroit. A clock starts ticking the instant he scans a customer's first item, and it doesn't shut off until his register spits out a receipt.

"To assess his efficiency, the store's computer takes into account everything from the kinds of merchandise he's bagging to how his customers are paying. Each week, he gets scored. If he falls below 95 percent of the baseline score too many times, the 185-store megastore chain, based in Walker, Mich., is likely to bounce him to a lower-paying job, or fire him...."

The system is called "labor-waste elimination." Dozens of retail chains are listed among the clients of the company that offers it -- the "Operations Workforce Optimization Unit of Accenture Ltd."

Of course, today's system is much more humane, or at least the language used to describe it is. To quote Frank Guglielmi, a spokesman for the Meijer chain, it "expects employees to be at 100 percent performance to the standards, but we do not begin any formal counseling until the performance falls below 95 percent."

Then what happens? Cashiers who are "challenged in the position," can get "training and counseling to help improve their performance. If this doesn't help them, there are various alternatives." Such as? Mr. Guglielmi didn't say, but one can guess. Like being fired.

The discreet language used to describe how the system works may be very 21st century, but the system itself sounds remarkably like Charlie Chaplin's nightmare vision of a dehumanized future.

This approach to work -- dividing each job into parts and timing each employee to see how long it takes him to perform each segment -- springs from the theories of Frederick Winslow Taylor. He's the efficiency expert who introduced time-motion studies early in the last century. His approach soon became known (and detested) as Taylorism.

Today's version is fine with some shoppers. "I am 84," says one, "and I get behind some old person and I can't stand it."

Another shopper is not a fan of the new system. "Everybody is under stress," she says of the cashiers. "They are not as friendly." She says some old folks feel so rushed at the store, they've stopped coming back.

Me, I'm not 84 yet but I've grown more sympathetic toward the old in recent years. (I wonder why.)

Reactions to this Labor Waste Elimination System may vary, depending on how much value you place on human contact versus a quick profit. I was exposed to the conflict between these competing values at an early age. As a child, I spent a lot of time in my father's little shore repair and dry goods store. He was the shoemaker, my mother the seamstress. Whenever he would throw something extra in a customer's bag -- call it lagniappe -- she would give him a cold stare. She didn't like to see him give away the merchandise. He tried to explain: "Sarah, it's not just the one sale that counts. It's the return business. They'll be back." She had her doubts.

He on the other hand thought of commerce as friendship. He knew his clientele, mainly sharecroppers in from the country or city laborers, not just by name but through instinct. When he retired, he opened a little booth in a friendly competitor's store to close out his accounts receivable. How many of his customers would you guess came by to settle their debts? Upwards of 95 percent, which they tell me is remarkable. Talk about return business; sometimes he'd dealt with generations of the same family.

When it came to extending credit, the old man had an eye for character; he didn't just go by the numbers in his little card file of payments. Frederick W. Taylor, the granddaddy of American efficiency experts, was big on numbers. He timed how long it took to do a job and how many movements it required. I wonder what numerical value he would have placed on friendship.