Time to Walk Off the Lot 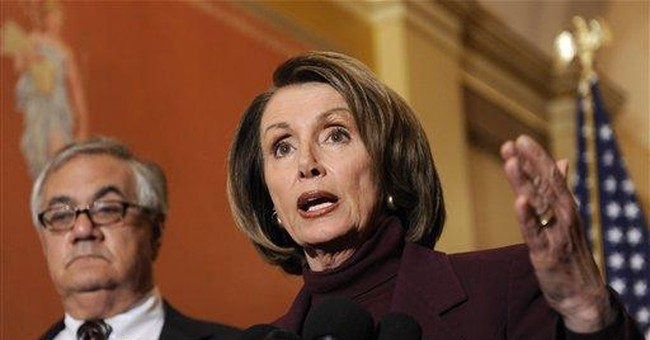 Would you buy a used auto company from any of the Big Three's execs who've been poormouthing before Congress? Their goal: to have Uncle Sucker -- that's you, Mr. and Ms. American Taxpayer -- save them from the results of their own poor management. They've got a clunker to sell and would love for the rest of us to take it off their hands. Would you give these highbinders your good hard-earned cash?

Of course not. But Congress is about to. It's not as if it's spending its own money.

Having had their first request for $25 billion rejected and told to come back with a plan to make their companies profitable, the Big Three's execs returned last week -- not on their private jets this time but with even more torque-powered chutzpah. They upped the ante to $35 billion (it's the add-ons that always cost the most when you're buying a new model) and promised to build the kind of cars that Congress (not necessarily the American consumer) wants.

At last report, the shrinking Big Three were willing to accept $15 billion -- for now -- and the services of a federal Car Czar to oversee their restructuring. Much like a used car salesman's dropping the price and offering all kinds of concessions as the customer is about to leave the lot. It's the kind of deal only a congressman might consider a bargain.

There's a solution for businesses that have real, salvageable assets but hopeless balance sheets. It's called bankruptcy, which relieves poorly run companies of their dead wood, frees them from their overwhelming debt, and gives everybody a chance to start all over again while saving what's worth saving.

If the Chicago Tribune can still come out every morning after entering bankruptcy, there's nothing to prevent Detroit from continuing to make cars while it's been reorganized.

Instead, the Big Three and their partner in incompetence, Big Labor, have turned to government -- i.e., We the People -- to keep themselves in business. At least for a little while -- maybe even through the next quarter, when they'll surely need another transfusion of public funds to stay afloat.

But there will always be pols like Chris Dodd, the senator from Countrywide, and Barney Frank, that comical class warrior of a congressman who now proposes to run the Big Three the way he did Fannie Mae and Freddie Mac. Namely, into the ground.

How? By substituting Congress' idea of socially desirable goals for prudent business practices, which is just what the Big Three have failed to practice. For them bankruptcy would be a step up.

Congressman Frank, like so many facile "thinkers," wants to know why, if government needed to step in and save the country's banks, it can't do the same to save the jobs (and perks) of the auto manufacturers. But the administration's quick, day-to-day decisions to bail out this bank or let that investment house go under wasn't done to save bankers' jobs but the banks themselves, and an economy that depends on stable banks. It was done to avoid a repeat of the monetary crisis that did in the American economy back in the 1930s, when some 9,000 banks failed, depositors' money disappeared, and the country's money supply was essentially frozen.

By the time Franklin D. Roosevelt was sworn in as president on March 4, 1933, the banks in all of the then 48 states had been shuttered or withdrawals from them strictly limited. The economy was at a standstill, and the first thing the new president did was to close the nation's banks for three days (a "bank holiday," it was called) until they could be saved, merged, or put out of their misery in the least painful way for all concerned.

It was to avoid that kind of disaster, which was looming as the Panic of 2008 spread this fall, that the Federal Reserve and the U.S. Treasury began taking over, bailing out, and generally backing up the country's supply of money and credit, which are much the same thing. The purpose, like FDR's, was not to destroy American capitalism but to save it.

But for government to begin taking over the direction of huge private companies, issuing directives about what kind of products and services they are to supply, which contracts they're to honor and which ones renegotiate, which executives they're to hire and fire and on what terms ... would fundamentally alter a once free economy.

Do we really want mainstays of the American economy like the auto industry run with the efficiency and profitabilty of, say, the U.S. post office? And essentially become means of distributing government largesse instead of saleable products?

There comes a time to just say No. That time has come for the auto industry. It can be postponed, and just might be if Congress and the administration agree to give the Big Three a bridge loan to nowhere. But come spring, the same execs doubtless would be back, and the same question would face the country: Should we throw good billions after bad?

Enough. Government certainly has a role to play when major industries go under. It can provide unemployment benefits, funds to retrain workers for other jobs when assembly lines shut down, and generally act as a responsible receiver in bankruptcy, saving what it can of those firms that for years have failed to show the vision, flexibility and principle that successful enterprises should.

What government shouldn't do is go on acting as an enabler for fast failing enterprises that have driven themselves to the wall, and now propose to do much the same service for the U.S. Treasury.

Sen. Josh Hawley Wants to Know Why Pro-Lifers Are Held to an Unequal Standard by Biden's DOJ
Townhall
Tucker Carlson speaks at funeral for founder of the Hell's Angels and breaks Leftist brains
Twitchy
Woman's Disturbing Reaction to Man Calling Her out for Wrongdoing Shows an Infantilization of Society
Redstate
Now the Commies Want to Abolish Your Kitchen
PJ Media