Q and A - How Would You Answer? 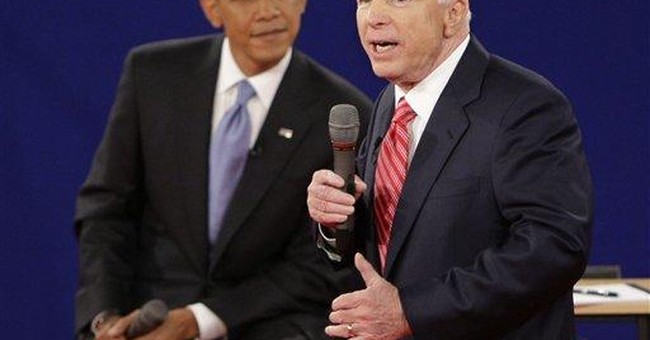 Either presidential debates are getting more civilized, or my standards for them are falling. The second one seemed a marked improvement over the first, a three-way bicker among candidates and moderator. This one sounded more reasonable, less rote. Practice may not make perfect, but perhaps it makes better.

Maybe it was the town-hall format that did it, encouraging the candidates to speak directly to a real live person rather than a television personality or the camera's eye. Whatever the reason, politics seemed to don a human face for a nice change. The fairest and most relevant observation of the evening may have come from Barack Obama who, almost in passing, noted that "nobody's completely innocent here." It was a precious moment of candor. (Politician Recognizes Original Sin!) But then the mutual finger pointing resumed.

It wasn't the answers but the questions that lingered after Tuesday night's debate:

Which candidate is more prepared to step in and be head of state, chief executive, and commander-in-chief of the armed forces come January 20, 2009?

Which one would give the country more hope - which is the best kind of fiscal credit?

Whose election would assure the country and the world, and which one would enter the White House an unknown quantity?

Would it be better to elect a president who isn't all that predictable, or one who is entirely too predictable?

If the markets continue to slide, whose policies would contain Wall Street's collapse before Main Street goes, too? Which candidate would get credit flowing and the economy moving again? Which one would lay down the best basis for long-term economic growth, and which one offers only short-term fixes that would make the future even rockier than the present?

Which one will reward labor, investment, innovation and honest investment, and which one would discourage all of the above?

The challenges facing the country aren't only economic. Both candidates have come out foursquare against genocide in the world. But which one, as commander-in-chief of the country's armed forces, would do something about it, and where? And still recognize the limits of earthly power? Is this country supposed to take action against genocidal threats only after they have been carried out? Or prevent them? If so, how?

Speaking of which, in the next few years, Iran is likely to proceed unimpeded toward becoming a nuclear power, despite all the UN's empty resolutions. In turn the Israelis, who have learned to take threats to their existence seriously, are just as likely to take military action to destroy or at least delay Mahmoud Ahmedinejhad's dangerous ambitions. Just as they destroyed Syria's nuclear installation not long ago. When that happens, whom would you rather have sitting in the Oval Office?

Is the best way to revive the economy to cut taxes for all or to raise them just for the rich? (As if the rich were too dense to find tax shelters for their income.) As a practical matter, can that be done? How expropriate capital without affecting labor? Can we really draw water from only the other fellow's side of the bucket? And how define The Rich anyway - those one tax bracket above ours?

But, hey, this is politics - not economics or equity - and specifically the politics of envy, which flourishes in inverse proportion to prosperity. Look for more of the same as times get meaner. Bad times are the health of bad ideas. And false choices.

Which candidate will settle for nothing less than victory on what he considers the central front in the war against terror, whether Iraq or Afghanistan? Which foresaw and fought for the adoption of a new and successful strategy in Iraq, and does that matter if it's Afghanistan that's the real central front? And how realistic is it to reduce American strategy to a choice between abandoning one or the other?

Which candidate has a strategy for the future, and which is more interested in finding scapegoats? Speaking of which, has George W. Bush - come to think, he's still president of the United States - ever done a single thing right in his life? Like preventing another major terrorist attack on these shores for the past seven years, or seeing the war in Iraq through to the cusp of victory despite many a terrible blunder, or ending Saddam Hussein's genocidal reign there, or giving his secretary of the Treasury and chairman of the Federal Reserve a green light to do whatever's necessary to stop the current economic slide - or are both presidential candidates so intent on separating themselves from an unpopular president that they dare not acknowledge all that?

Which candidate would risk saying a single unpopular thing in this campaign for no better reason than he believes it?

As this election grinds on, voters will have their own questions to pose. And they'll doubtless be as rhetorical as mine.

Logic has little to do with politics, especially in an election year, when winning tends to become the only goal. In the mounting urgency of a campaign, who's got time or energy to waste making sense?

Another presidential debate is over. Another awaits. So does History.