In the Pigs and Lipstick Dept., Context Can Be All 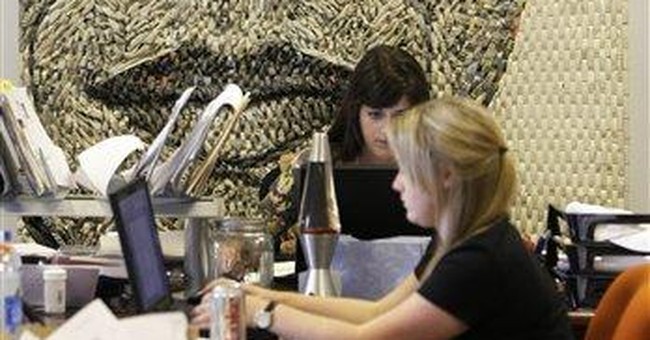 The latest overblown irrelevance in a presidential campaign full of them was the oh-so-big flap over Barack Obama's not very original comment about pigs and lipstick. ("You can put lipstick on a pig. It's still a pig.") The McCain-Palin campaign - or is it the Palin-McCain campaign by now? - immediately took vast umbrage at his remark, accusing Sen. Obama of, natch, sexism. Even if he was only taking a jab at the opposition's policies, not its vice-presidential candidate.

But forget context; this is a presidential campaign in literal-minded, post-literate, politics-all-the-time America. Every opening, however small or false, will be exploited. Look at what Barack Obama himself had done when his opponent spoke of being willing to station American troops indefinitely in a post-war Iraq to maintain the peace, just as GIs are still in Germany and on the Korean peninsula a half-century after a war. Sen. Obama claimed John McCain was advocating a hundred years' war. Call it politics, and obfuscation, as usual.

The first casualty of an American presidential campaign is context, and Barack Obama had delivered his platitude about lipstick on a pig, unfortunately for him, on the (high) heels of Governor Palin's witticism as she accepted her party's nomination: "What's the difference between a hockey mom and a pit bull? Lipstick."

A former broadcaster, like Ronald Reagan, the lady definitely knows how to deliver a line, as she's been demonstrating with some zest for the past few weeks, much to Republicans' delight and Democrats' chagrin. Given that context, a jaded cliche could be twisted to look like an ungentlemanly attack on a lady who's become an idol of the crowds. ("SA-RAH! SA-RAH!")

Context can be all in these matters. As Republican operatives well understood. So they took, or at least pretended to take, Sen. Obama's applause line as some kind of male-chauvinist affront. Never mind that Barack Obama, that model of political correctness, not to mention political savvy, wasn't attacking Sarah Palin's womanhood. Certainly not intentionally. Never mind the raucous cheers and applause at his campaign rally when he trotted out this old line. A candidate can scarcely be held responsible for the tastelessness of his supporters.

The worst that can be said of Sen. Obama is that he didn't realize how his old saying might be interpreted in the midst of this new Palin-dominated campaign. A figure of speech that was perfectly acceptable a couple of weeks ago, indeed hackneyed, had suddenly become a political boomerang.

At worst, Barack Obama could be judged insensitive to linguistic nuance, that is, he's guilty of being a typical American male. Welcome to a very large club, senator. It's called the Association of American Men Who Offend but Haven't the Foggiest Idea Why.

Membership is just about universal among the male population.

The only part of this tempest in a news cycle that may be worth noting now was Sen. Obama's outraged reaction to the Republicans' outraged reaction to his pig-and-lipstick comment. The old Barack Obama, the one who always rose above petty provocations, came out swinging wildly this time.

He sounded angry, or, to be more precise, like a man who was trying to sound angry. As if he'd been told that self-righteousness would play well at this stage of the campaign.

Republicans, he told a campaign rally in Norfolk, were indulging in "the same game that has made people sick and tired of politics in this country. They seize on an innocent remark, try to take it out of context, throw out an outrageous ad because they know it's catnip for the media."

Ah, yes, the awful media. If there's anything both presidential campaigns can agree on, it's the utter depravity of the media. They may have a point, but it's scarcely a subtle one.

Listening to Mr. Cool blow his cool, it was hard not to wonder what ever happened to the old, self-possessed Barack Obama, the one who had captured the country's imagination for a brief, sunlit time. What had changed? Had he decided that what he was doing wasn't working any more? Or was he just listening to his rattled handlers, who've been telling him to get out there and throw some punches?

For whatever reason, here was the once dignified young Hope of the Nation huffing and puffing like the run-of-the-mill candidates he'd defeated for his party's nomination. He was sounding like Š Joe Biden. It was hard to resist the conclusion that the latest fickle poll results, or maybe the whole Palin Phenomenon in general, had got to him. And he's not even down in the generality of polls, not really. They still show the race even, if his lead has vanished. But panic begins to set in - for no good reason.

Often enough the test of a presidential candidate - and of a president - is not how he responds to the great issues or reacts to the great crises, but whether he will yield to the petty irritations of politics. Does he lift the level of public discourse, or does he join in demeaning it? Does he show vision, or is he just another scrapper out of his league?

Great candidates, like great athletes, rise above the ordinary. They stick to their game plan despite seeming setbacks. They come through in the clutch. They show vision, not irritation. They keep their sense of humor, and balance. They maintain their pace; they aren't thrown off stride by little things. Candidates with style will rise above the petty, and keep their eye on the mark, looking neither to the right nor left, but press ahead. They are not diverted. Listening to Barack Obama swerve off into anger or at least a facsimile thereof, it was hard not to suspect that he's losing it.