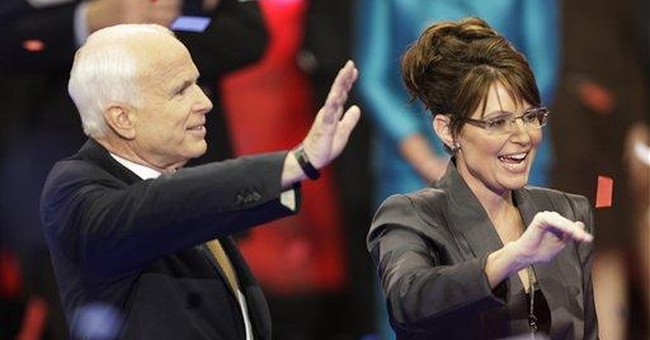 "I know who I am." - Mrs. Rose Castorini in "Moonstruck," explaining to the young jerk of a professor why she wasn't about to take him up on his offer of a warm bed.

Before she delivered her maiden speech at a national nominating convention, preparatory to that same convention's nominating her for vice president of the United States, there was the strangest fluttering among the coveys of the always Angry Left. The wildest rumors were being spread about the lady governor from Alaska, and about her family. Just look at her hairdo. She's got to be some kind of religious extremist, or even a Pentecostal. Was she going to address the nation in English or tongues? The nutcases were in full flight on the Internet.

Of course they always are. But this time they were being matched and raised by the usual merchants of condescension inside the all-knowing Beltway. The most curious turnaround in cultural politics was taking place. Suddenly it was our Advanced Social Thinkers, our unisex avant-garde, who were expressing doubts about whether a woman with children should really be taking on so heavy a responsibility. Shouldn't she be staying home with the kids?

Why, picture the distractions the little ones would present. Imagine that cute-beyond-words little girl running around at press conferences. (It'd be quite an improvement over most of 'em, if you ask me.) But, no, can't have that. Forget JFK's photo-ops with Caroline and John-John in the Oval Office back in the day. The rules are different for Sarah Palin. Indeed, they've been turned upside down. At dizzying - and revealing - speed. For when her critics took aim at Sarah Palin, they revealed most about themselves, and about a society that has gone from baby-friendly to, well, pretty screwed-up. The secular humanists, if that's the right name for their denomination, haven't been this snide, this superior, this all shook up since John Ashcroft.

It was as if Sarah Palin's critics were deliberately leaving themselves open for a knockout punch. A punch that would be delivered with a lady's deft touch, but one that'd knock 'em out of the ring and halfway across the county. They still don't seem to know what hit 'em. Their only recourse is to jabber some more. (Just listen to 'em on NPR. They refuse to stop losing this fight.)

Can these people have any idea whom they're dealing with? Even the faintest? Couldn't they tell just from her poise, her sense of command, when she was being introduced as John McCain's running mate? She's nobody to underestimate. You'd think anybody could tell that. At first sight. Well, anybody but a member in good standing of the American intelligentsia, or what passes for one.

Her attackers managed to do everything wrong in advance of Sarah Palin's self-introduction to the country Wednesday night. They might as well have set the stage for her. It was as if Somebody had set a table for her in the presence of her enemies. And she just walked out there and dined on them. With perfect table manners, of course. For her critics had put her in the best of positions for someone making her debut on the national stage: They'd made her an underdog. The unfairly maligned wife and mother. All she had to do was put them in their place, gently but firmly. Which she proceeded to do, like a lady coolly passing the cucumber sandwiches.

Sarah Palin couldn't have been a mystery to the average Joe. Or Jane. There may not be many ladies left, but most of us can still recognize one. How could all these distinguished pundits have failed to? How could they have so underestimated her, these distinguished columnists with their bylines in the Washington Post and New York Times, these brilliant dukes and doyennes of our commentariat, the kind of Big Names whose eyes tend to wander over your left shoulder when they're introduced to you at a Washington reception, as if they were looking for somebody important . . . . How could all these East Coast geniuses, these kings and queens of the blogosphere, these brilliant intellects, have been so, well, less than bright?

If we didn't know better, we'd suspect all this was a Republican plot cooked up in the dead of night by Karl Rove, who'd gathered all these dignitaries in some cellar at the beginning of the week and put them up to it - the E. J. Dionnes and Maureen Dowds and their fellow trendsetters What possessed them? We can think of only one explanation for their rush to judgment, and away from good sense: incipient panic. Now, having heard from Sarah Palin, we can understand the reason for it. She was everything they must have feared in a Republican candidate for vice president, and then some.

They say a president's first important decision is his choice of a vice presidential candidate, that whom he picks says a great deal about his judgment. Any more questions now about John McCain's judgment? Or about Sarah Palin's? She went out on that vast, empty stage and took it - and the country - over.

Yes, her speech was well written, well delivered, well crafted. But it was the small touches that impressed the most - the womanly touches of someone who knows who she is. And how to project it. The way she waved only one arm at a time; no two-armed Nixonian sign of triumph for this contender, thank you. The occasional biblical allusion, as if it were no big deal, just the way she naturally talks, and thinks - and there's no cause to be embarrassed about it. And when she demolished her opponents, she was nice about it. As mom would say, she went out there and just niced 'em to death. Cut Œem off at the knees and they thought they were being seated for dinner.

It's hard to think of anything a pro would change about her acceptance speech. Or her delivery of it. Most important, the speech was in character: completely devastating, completely ladylike. But not just anybody could have given it. You have to be Sarah Palin to talk like Sarah Palin.

There was no end of small touches to admire. Her oblique reference to her current family problem (if you've got a family, you know there's always a current one) and blessing. The way she spoke not just for Wasilla, Alaska, but for all the Wasillas - the Midways and Springfields and Pine Bluffs and Walnut Ridges. In short, for the small-town America in all of us, whether we live in one or not. Because the small town is inseparable from the American psyche, imbibed with Mark Twain if not through actual experience. There's a Hannibal, Mo., down deep in all of us. And who's more of a community activist than a good mayor of a good small town?

Yes, all in all, a masterful speech, one worthy of - and this is high praise - Barack Obama. And she didn't even need those faux Greek columns.