A Play in Two Acts 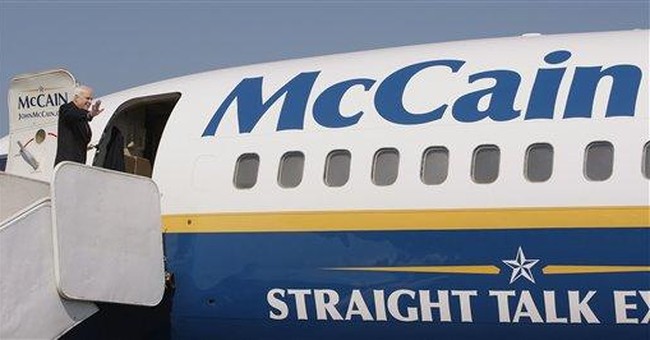 What a relief last week to go from the real world of Gustav to the unreal world of another national nominating convention, full of full of hype and fury signifying . . . well, that depends on who's talking at the time. As the drama built up to the well-staged acceptance speeches Wednesday and Thursday nights, Tuesday evening was just the prelims. But it had two stars:

Fred Thompson was the first. The former senator and prosecutor was utterly convincing so long as he was praising the record of his party's standard bearer. It was an easy case to make. Even the opposition has made a ritual of acknowledging John McCain's heroism before attacking him. ("I honor Senator McCain's record of service to his country, but . . . .") Who couldn't recognize John McCain's courage and character? And not just in uniform. He's been his own man in the U.S. Senate, too, yet able to forge compromises at critical moments. That, too, takes courage.

It was hard to resist the thought that if only Fred Thompson had campaigned half so well for himself as he did for John McCain in this speech, he might have been accepting his party's presidential nomination at this convention. Indeed, at the beginning of this campaign so long, long ago, I had picked him and another long shot, a freshman senator from Illinois, as the dark horses most likely to win their party's presidential nomination. But only one crossed the finish line.

However different their styles, both men have an engaging way about them, but Mr. Thompson soon grew bored with all the folderol that goes with being a presidential candidate, while Barack Obama seemed to rise above it - even as he accommodated it. How he does it is a mystery, like so much art, but it's an impressive performance. The magicians, and Senator Obama certainly is one in his chosen field, call it levitation. It'll be interesting to see how he pulls it off against down-to-earth John McCain in their first debate.

How strange: It is the Republican ticket in this election that begins to represent change while the Democratic one, with all its talk of change, and maybe only talk, begins to look a lot like the old liberal establishment. Listening to Fred Thompson go on and on, I think: Here he is in the supporting cast of this convention while John McCain, whom everybody had counted out at one point, has the starring role.

American politics, like America itself, is full of surprises.

Then, midway in his address, after he's got us convinced, Fred Thompson shifts gears, even personas, and delivers an old-fashioned Tennessee stump speech worthy of his origins. At that point Mr. Thompson morphs into Arthur Branch, the district attorney he used to play on television, spewing homespun maxims at screenwriter speed. And I'm brought back to unreality.

It's no coincidence that the proceedings at Denver would be dominated by that huge telescreen telling us what to think, what emotions to feel, what music to respond to, at every moment. Surely only Disneyworld can match our major parties at what is now called people-moving, and not just physically.

Fred Thompson may have been the orator of Tuesday evening, but Joe Lieberman, not surprisingly, was the thinker. To use a word that seems to have died with the old Greeks, the man is a rhetor - one who seeks not so much to rally the faithful as to persuade the unconvinced.

Surely the most effective part of the evening came when Senator Lieberman, a soft-spoken independent in his soul long before he became one in name, asked his partisan audience's indulgence to say a few words to America's yet-undecided independents and, yes, Democrats. By which he surely meant old-fashioned Democrats like himself, dedicated not just to fighting injustice at home but threats from abroad.

You may remember that kind of Democrat. They used to be called Scoop Jackson Democrats and, before that, Harry Truman Democrats. You know the species: the kind of Democrats who, throughout the long, twilight struggle known as the Cold War, drew the line against tyrants - and would not retreat.\

Everyone knows the one big reason Joe Lieberman is supporting John McCain in this election: because in the darkest hour in this new long, twilight struggle that has only begun, John McCain refused to settle for anything less than victory. Or as he put it at the time, explaining what seemed his quixotic support for a war that all the Wise Old Heads told us was lost, he'd rather lose a political campaign than for his country to lose a war.

And sure enough, John McCain's view - and Joe Lieberman's - prevailed at last, just as American forces are prevailing now, despite what the oh-so-sophisticated Joe Bidens had assured us was a losing cause.

It would take a "willing suspension of disbelief," Hillary Clinton told us at a crucial point in this struggle, to think that a new general's new strategy would have a new result. Well, if she's not a believer by now, she hasn't been reading the news out of Iraq for the past year.

It was an interesting evening all in all, with its ebbs and flows, its alterations between appeals to the heart and those to the mind, between the old shibboleths and reasoned arguments. Convention-watchers Tuesday night got a camera's-eye view of America's mixed-up political psyche.

But the convention's and the country's mind was clearly elsewhere - on a lady from Alaska we the people hardly know: Sarah Palin, Sarah Palin, Sarah Palin. She's the one everyone was thinking about while the speakers droned. Was she the Church Lady from the old "Saturday Night Live" reprised for our viewing pleasure, or our own Margaret Thatcher in the making? Just a one-election wonder a la Geraldine Ferraro, or the real thing? We were all about to find out.