The Transfiguration of Barack Obama 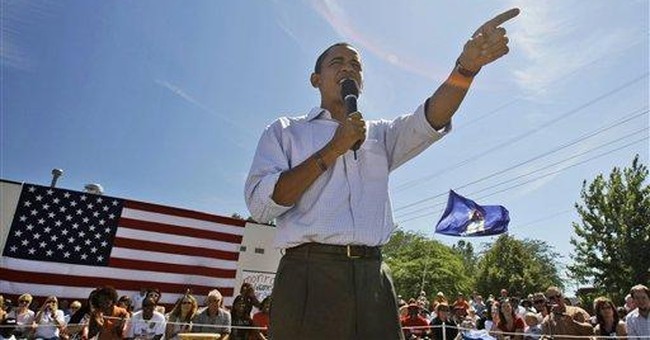 Who says American oratory is dead? It has been resurrected and refined on a mountaintop in Denver. What a triumph of staging, what a well-modulated voice. Even the speaker's angrier tones seemed well orchestrated, beautifully paced, understated, really, considering the injustices he was doing battle with on our behalf.

"This election has never been about me. It's been about you," he told us in his ever-modest way, as the spotlight played on his handsome young features, and the sea of waving posters below him plastered with his name. Barack the Beatific was accepting his party's nomination for president of the United States not just with humility, but "great humility." Our leader prides himself on his humility.

How easily the phrases flowed in that mile-high gladiatorial setting, rippling out across the nation and the world like a warm embrace. Casual yet fully in control, The Nominee spoke with a Roman self-command. His clear diction, his perfect timing, his personal connection with each and every one of us . . . what a magnificent production.

And he never overdid it. This is a William Jennings Bryan for the metrosexual era. No harsh cries at the top of his voice but only lulling, irresistible persuasion. Who wouldn't follow him? Only distant, impersonal others had anything to fear from this eloquent young man.

The corporations. The rich. The far away. The foreigners who were stealing our jobs. But he was never harsh about it. His manner, like his stand on the issues, is always negotiable. Turn the verbal power down slightly, and his oration would have made perfect background music. Call it the progressive jazz of politics.

Contrary to the platitude, it's not the thought that counts, certainly not in an acceptance speech before a huge adoring throng, but the music. And the music this night extended far beyond that amphitheater atop the Rockies.

Barack Obama's tones spread out across the nation, into living rooms and restaurants, mesmerizing listening parties and blaring forth in Times Square, its participants as entranced as they'd hoped they would be.

What a fine xylophone touch Barack Obama has. His Brubeckian riffs and velvety chords brought us together in pure appreciation of ourselves. The rare hard beat mixed things up just enough to keep the emotions stirring.

CNN, NPR, MSNBC, YouTube, the World Wide Web . . . none were quite the right medium for this performance. It ought to be a record, maybe an old 78 rpm with a nice worn cover. Easy listening for emotional release.

O O O O that Shakespeherian Rag, as Mr. Eliot would say. It's so elegant, so intelligent. Or at least it makes us seem so. And seeming so is so much easier than actually having to think things through, let alone do them.

Who would have thought it? A rhetor walks among us. His speech should have been in Latin. And was it just a trick of the lighting, or was that an aura that shone about his head? A head that belongs on an ancient coin, or rather a smoothly polished replica of one that you can buy in the better museum shops.

What a handsome young man, and what a fine sound he made as the sunlit eve faded into brilliant night under the lights. How well he played his instrument of 80,000 there in Denver and many, many more within instant reach of his mellifluous voice. Yes, not a doubt about it for those keeping score: An A-plus for delivery.

As for content, was there any beyond the smooth Dynaflow Delivery? Any sign of gritty reality? Barack Obama did warn that Our Work Will Not Be Easy, that it will demand sacrifice, though he was not so indiscreet as to specify any. Unless you count lower taxes, new cars, a world without war, free medical care . . . and so comfortably on.

But to point out these petty details, this or that contradiction in an airy litany of promises, is to miss the point of the evening, the music of the night.

"We are the party of Roosevelt," Barack Obama proclaimed, lest anyone doubt his prowess in war as well as peace, warning the enemy: "I will end this war in Iraq responsibly . . . ." Not quite FDR's insistence on Unconditional Surrender, is it? Or that commander-in-chief's solemn vow:

"With confidence in our armed forces, with the unbending determination of our people, we will gain the inevitable triumph -- so help us God." -- Franklin D. Roosevelt, December 8, 1941.

But such is not today's style. Maybe I wasn't listening closely enough, but did anybody hear the forbidden word in Barack Obama's speech Thursday night, the word Victory? There was a time when one was permitted to say it.

Not that Barack Obama was unwilling to face the darkest possibilities.

Listening to his picture of the American economy, you might think we were back in the Great Depression. One could almost see the soup lines. But he spoke on a day when it was reported that the nation's economy had grown an encouraging 3.3 percent last quarter.

Then the words faded and it was over. The multitudes drifted away. Outside the stadium, away from the crowd, after the television sets were turned off, a certain cognitive dissonance began to set in as the magic ebbed. In the merciless light of day, it occurred that our young crusader is running against an old man of real experience, while his experience essentially consists of the sum of his speeches.