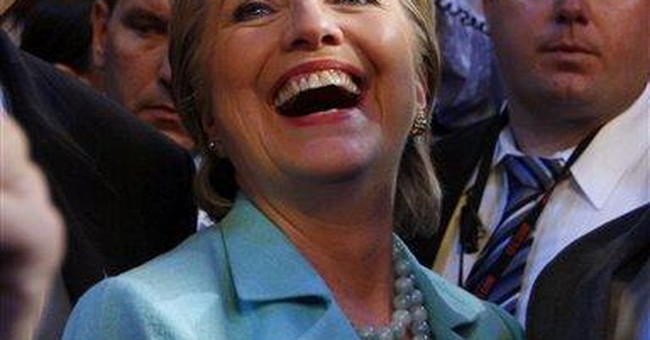 Listening to Hillary Clinton's warm-up act for Barack Obama at the Democrats' still slightly divided convention, it occurred that, if only the lady had been that graceful and gracious, that poised and personal, as in control of herself and her surroundings, and just generally as well-organized and focused during her long, long and almost, almost successful drive for her party's presidential nomination ... she herself would have been giving the acceptance speech at the Democrats' national convention.

Even through the distorting lens of the television camera, you could feel the same thought percolating through the convention itself. But it's too late now. The die has been cast, or rather the votes have been.

So there was Hillary Clinton, the presidential nominee who might have been, demonstrating that she would have been the better choice by showing how defeat had improved her. Life is just full of ironies. Defeat is the greatest of teachers but, as Senator Clinton demonstrated this year, its lessons may come too late.

Never mind. Hillary Clinton saw her duty Tuesday night - to her party, to herself - and she did it with a dearly earned dignity. From the first lines of her speech to the last, she plugged the young comer who somehow had managed to beat her and all the odds to grab the nomination. And she was just as forceful, and repetitious, all through her performance, punctuating it with Obama ads.

All right, the speech was mainly about her campaign and her life story, but what else could she have done? She's a politician, after all, and the Obama people can't complain about her repeated endorsements of their man, who is now, at least formally, hers.

The criticism that Hillary Clinton didn't devote her whole speech to describing her erstwhile opponent's life, deeds and shining virtues lacks a certain charity. What was she going to do, praise his many years of service - civil and military - to his country? His constancy of purpose when it comes to this or that issue he keeps finessing? His qualifications as commander in chief? Please. If she'd done that, she would have blown the credibility she's earned at such great sacrifice over these past 18 months.

Somewhere in her performance she went through her party's usual list of failed statist panaceas at home - think Hillarycare, think Fannie Mae and Freddie Mac - and tried to slough off her own inconstancy in a war abroad. (Do you suppose she still assumes it would take a "willing suspension of disbelief" to think the Surge would work in Iraq? Tell it to the Marines.)

But all that was scarcely the essence of her appeal Tuesday night. All that was just boilerplate. What struck the listener was that Hillary Clinton had finally achieved, yes, a presidential presence. It was unmistakable. The lady had arrived - just in time to welcome another candidate as her party's nominee. But she's laid a strong foundation. You could almost see the numerals forming in her listeners' minds: 2012. But 2008 might have been her year if only she'd learned a little more a little sooner.

What thoughts must have been going through her always savvy husband's mind as he looked down on the scene, showing outward pride? Was he inwardly composing his own speech for the next night? Surely he would not have wanted to linger on the obvious - that if not for his own oafish role in his wife's campaign, and in other better-forgotten episodes, his spouse might be the one delivering the acceptance speech at this convention.

That's when a familiar thought occurred, the same thought I'd entertained so often during the long, dismal twilight of the Clintons' post-impeachment time in the White House as all the dreams were ground away. And this year they'd so yearned to return. What a tireless, intelligent, undiscourageable couple with so many (if mainly political) gifts.