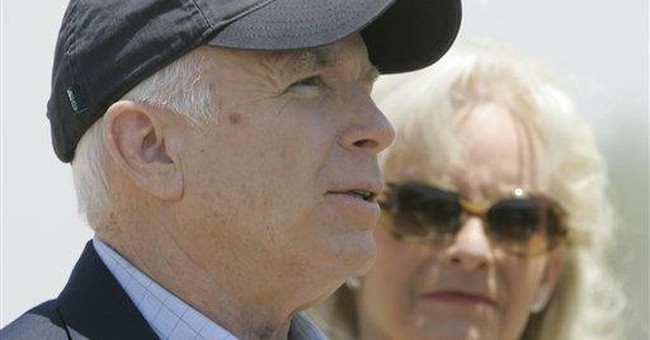 With apologies to Walter Winchell:

Good evening, Mr. and Mrs. America - from border to border and coast to coast, and all the ships at sea. Let's go to press. Barack Obama is back from his BOFFO European tour, having wowed 'em in Berlin and Paris and points east, notably Kabul and Baghdad-on-the-Tigris. Comparisons with John F. Kennedy and even Ronald Reagan were flying even before this Obamathon began.

Those of us on the dextral side of American politics can only envy our honorable opponents of sinistral bent for the grace and elegance with which the newest star of American politics conducted himself during his road tour. Š Bon Jovi should get such reviews. Š He came, he saw, he wowed. Š If only the Germans and French elected the next American president, Barack Obama could start planning his inauguration/coronation now. And he offered not just style but propriety, even tradition. Asked by a French reporter to review the failures of the Bush administration, which he's been doing ever since the start of his presidential campaign, the young senator respectfully declined, explaining that we in America have a tradition of not criticizing a sitting president when abroad. What's more, he approved of the practice and was going to follow it. It was the kind of comment that made you want to stand up, wave the flag and say: Well done. Who says Barack Obama is no traditionalist?

If the Obama Tour was a triumph, the troubling thought occurs that, like his campaign, it was a triumph of style over substance. Talk of his Kennedyesque grace may be all too accurate, for JFK was scarcely inaugurated before he invited his administration's and maybe the 20th century's greatest crisis by appearing weak and uncertain: the Cuban Missile Crisis of 1962. Š There's no telling where a President Obama's first crisis would emanate from, but Teheran is a good guess. The world is just full of terrible surprises waiting to happen. Will Iran's president and demagogue-in-chief, Mahmoud Ahmadinejad, see this junior senator's eagerness to negotiate without preconditions as a weakness to be exploited, the way Hitler sensed Chamberlain's?

Neville Chamberlain, too, was eager for direct negotiations, and drew huge crowds at home and abroad roaring their approval of his devotion to peace in his time, aka appeasement. Š In September of 1938, Britain's Queen Mary wept with relief when the prime minister told Commons that he would be going to Germany for a third time to conciliate Herr Hitler, this time to Munich for an international conference that would resolve the crisis. Czechoslovakia's Jan Masaryk, who understood what the announcement meant for his little country, just wept. Come to think, only the Israelis were less than wildly enthusiastic when the Obamaplane touched down in the Holy Land on its royal progress.

But there's no denying Barack Obama's shining appeal, his way with words, and how good he looks tieless in a white, unbuttoned shirt fielding questions with a cat-like grace. He can shift positions so completely yet smoothly you scarcely notice. Even more impressive, he makes anyone who points it out sound petty.

If only the right side of the American political spectrum had a comparable presidential nominee and slender young matinee idol to make its views irresistible. But there's hope: If Senator Obama will just continue his political evolution now that his party's primaries are over and he's back in the real world, he may yet prove the conservative candidate in this race. He's already pivoted on Iraq, campaign financing, gun control, FISA, and who knows what's next. More to come, no doubt.

Every time you look around, the Democratic candidate is ooching over to starboard. Soon he'll be passing John McCain on the right though he did switch the other way on school vouchers, which he's now against, at least when he talks to a teachers' union. Barack Obama is the candidate of Change, all right - at least when it comes to his own stands. He makes poor, literally old John McCain look like the fuddy-duddy he is for sticking to his same old positions on victory in Iraq, the Second Amendment, education reform, public financing for presidential campaigns. He's so unhip he's still against punishing the phone companies for cooperating with the government right after 9/11. But who remembers 9/11 any more? Another date that was going to live in infamy hasn't.

The chief effect of a renewed sense of security at home and the sight of victory abroad has been to encourage not gratitude on the part of the American electorate but amnesia. Result: George W. Bush is set to leave the White House as the most unpopular president since HST. It's the hallmark of American democracy, ingratitude, and has been at least since John Adams, that dull old puritan, got into his carriage and hustled out of Washington without even attending the inauguration of his glamorous successor, T. Jefferson, who represented La Nouvelle Vague in 1800 the way B. Obama does in 2008. The American desire for change never changes.

Tune in again tomorrow. Till then, this is your devoted correspondent signing off for Jergen's with lotions of love.