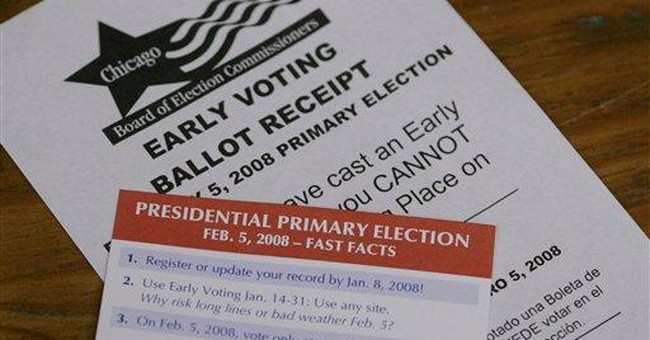 It's a snap commenting on yesterday's elections the morning after. The hard part is saying something about the elections before the results are in, which is when this column is being written. And my crystal ball is in the shop, dangit.

The late not-so-great Westbrook Pegler started out as a talented sportswriter and engaging political commentator back in the last century, but wound up a sodden right-wing crank. He once confessed that, contrary to popular belief, it wasn't his hatred of Eleanor Roosevelt that had driven him bonkers. It was having to write on Monday and not being published till Friday in those slow-motion, Via Air Mail days. He should have tried writing a Wednesday column about a Tuesday election that hadn't happened yet.

But that's no problem in our high-tech age. Thanks to the modern miracle of public opinion polls, with all their latest scientific advances, we now know just how the elections will go even before the polls are closed. Why go through the formality of counting the votes?

Here's what that kind of thing leads to: Not long ago I spent the day of the New Hampshire primary pounding out a trenchant analysis of why Barack Obama had scored so decisive a victory over Hillary Clinton in that early test of their electoral strength. We all knew just how the vote would come out. The polls had told us: It would be Obama by a mile; his lead was insurmountable.

Here at the Arkansas Democrat-Gazette, our editorial for the next day analyzing the significance of Barack Obama's dramatic victory was in type well before the polls closed in New Hampshire. Early in the evening as the election returns began dribbling in, Sen. Clinton took a slight lead, which surely would fade as the night went on.

Always thinking ahead, my syndicated column along the same presumptuous lines had already been dispatched for distribution first thing in the morning. All a couple of us on the editorial page had to do was hang around the newsroom just for safety's sake. Miss Hillary's edge was sure to fade as the night wore on, wiped out by the Obama tide. It was a sure bet. Even the Clinton camp was preparing to explain why its candidate's loss in New Hampshire wasn't all that serious.

But a funny thing happened on the way to Senator Obama's triumph in New Hampshire. It never happened. Instead, Senator Clinton's early lead widened instead of disappearing, and by our final deadline - our last chance to yank that editorial - she was eking out a victory. Discomfited as I was, I did the only thing a man could: laugh out loud.

Barack Obama's victory had turned into the surest thing since DEWEY DEFEATS TRUMAN in 1948. I don't think I've ever identified so strongly with Col. McCormick's old Chicago Tribune, which ran that premature and now historic headline back in '48. The picture of Harry Truman proudly holding it up has become an iconic image by now.

Quick like an editor, I pulled the not so prescient editorial I'd spent so much time polishing, and found something less embarrassing to run in its place. And I hastened to get an e-mail off to my editor at the, yes, Tribune syndicate in Chicago. It began: MANDATORY KIL. Lest my column see the light of day.

Happily, it didn't. Other columnists weren't so lucky. Next morning, various ponderous pieces analyzing The Fall of the House of Clinton were filling the ether. Suffice it to say that there was a lot of egg on a lot of faces.

You'd think I would have known better than to write an editorial on the basis of those oh-so-reliable polls. After all, they'd failed to detect Barack Obama's wide lead in Iowa, and soon enough they'd vastly underestimate how well he'd actually do in South Carolina.

The same expert pollsters overestimated John Edwards' support in Nevada, putting it at four or five times the vote he actually got, and underestimated John McCain's support in South Carolina, just as they had Mike Huckabee's in Iowa. If the polls this year were a stock, the savvy investor would sell, sell, sell.

It may not be clear by dawn's early light this morning which candidates won all those 24 primaries, caucuses, district races, and what-have-yous yesterday, but the big loser this election year is clear: the polls. I always said I'd never trust them, which of course I'd promptly proceeded to do in New Hampshire. But the results there made a believer of me. Or rather a disbeliever.

By now the pollsters have produced a variety of explanations for their less than exact projections. They always do. Remember their plentiful excuses after reporting all those exit polls anticipating President Kerry's landslide victory in '04?

This season, we're told, the polls were skewed by all the new voters who showed up to cast their ballots, or by the sheer number of voters who waited till the last days or even last minutes to make up their minds, or by the unanticipated number of older women who voted for Hillary Clinton in New Hampshire, or the number of young, black, and/or well-educated voters who materialized to cast their ballots for Barack Obama in South Carolina and elsewhere, or well, you name it. Me, I suspect the pollsters were thrown off their stride by global warming. Or maybe the moon and tides.

The science/art/guesswork of modern public opinion polling is really quite good - at making excuses. Me, I don't even have an excuse for that editorial which never appeared. Just a smile. Because like most Americans, I'm pleased when the voters don't meekly follow the polls and pundits. It restores my faith in we the unpredictable people.