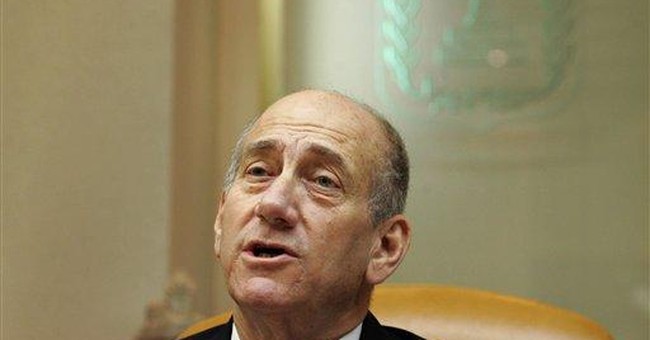 Ehud Olmert, the Israeli prime minister, and Mahmoud Abbas, Palestinian president, have met for the first time at Jericho, which would be on Palestinian soil if a two-state solution to the Arab-Israeli conflict ever emerges.

Unfortunately, Palestine has become a failed state before becoming a state, with half of it (Gaza) under the control of terrorist Hamas and the rest (the West Bank) vulnerable to all the life-threatening ills that any small state is prey to in that rapacious part of the world.

When shall these two meet again, and can their joint gamble against the odds pay off? For the odds are always against peace in the Mideast.

A year from now, or five years from now, will politicians and commentators look back at this juncture and conclude that the Palestinians' civil war was the turning point that made peace possible? Because it isolated Hamas in Gaza and let a single, peaceful, legitimate Palestinian state develop on the West Bank until it was strong enough to make peace.

Or will Israelis and Palestinians be blaming each other again, as they did after the Camp David summit fell apart, for having missed still another opportunity to end their hostilities?

There was never a real chance for peace between these two peoples until there was a war - a civil war - to determine who really represents the Palestinians. Lest we forget, the Israelis also fought each other at the birth of their state in 1948 to see whether they would have one government or two, one army or two. Now the Palestinians, too, may finally have a moderate leader to rally around - if they only will.

Much depends on how much support both sides can garner - from each other and from the rest of the world. For now all are making the right gestures:

Ehud Olmert's government is releasing some of the prisoners and the funds it's been holding, and Mahmoud Abbas has begun to reform his corruption-ridden regime and gain a new degree of control over his wayward militia(s).

The Arab league has sent its first delegation to the Jewish state to open negotiations. Europe and Washington are making the right sounds and the right choices, refusing to deal directly with Hamas while pledging support for what remains of Mahmoud Abbas' semi-authority.

The current sticking point, or rather one of them, is how fast Israeli-Palestinian negotiations should proceed. Should the two sides begin discussing terms of a final settlement now or, much like the road map that's led to nowhere, get there step-by-step?

After all, why would the Palestinians accept anything less than the state they've long been promised? But why would the Israelis hand over still more land, as they did in Gaza, only to see it become just another staging base for attacks against them, as in Gaza?

To break this impasse, why not follow both routes to peace? On one negotiating track, shape the terms of a final settlement. There's still a perfectly good one in the files. Ehud Barak and Yasser Arafat worked it out at Camp David before Arafat proved Arafat again, and chose to start another intifada instead. Why not dust that agreement off? It might need only a little tweaking to reflect changed conditions since 2000.

In the meantime, another and parallel team of negotiators could start working on assuring security for both Palestinians and Israelis. The Israelis are already sending light arms to Mahmoud Abbas' security forces. Why not mutual patrols on the West Bank, or at least a mutual accommodation there while a semblance of peace and prosperity gains traction there? Then put the terms of the final settlement into effect. A final settlement and the declaration of a Palestinian state (again) could serve as a powerful incentive to finally end this nigh-endless tragedy.

If the ultimate destination is a two-state solution, why not get there on two tracks that would meet in peace?

All of which is easier to envision in vague, abstract generalities than to carry out village-by-village, acre-by-acre, checkpoint-by-checkpoint. But there's always been light at the end of this tunnel. Now there's a tunnel. Ehud Olmert and Mahmoud Abbas opened one at Jericho.

Negotiations can yet succeed if both sides mean what they say. And, more important, act on what they've said. The faster the process goes, the better. For nothing will allow old grievances and present suspicions to fester like delay. Time is not on the side of peace in the Middle East; every opportunity for peace needs to be taken, not put off still again.

Yes, eventually Hamas will have to be dealt with, either militarily or politically or both. The same goes for all the little Hamases out there, for Hamas is already being outflanked by even more radical groups in Gaza. But to invite it to a peace conference at this delicate point would be like inviting the fox to guard the hen house. Could we please wait till there's some kind of peace in sight before inviting Hamas and terrorist company to disrupt it?

But with or without Hamas, why should these latest negotiations prove any more successful than those at Camp David, or Oslo, or Madrid, or at all the other futile conferences before? Because this time the jihadists in Palestinian ranks may have been isolated, and Mahmoud Abbas may have come to the realization that his only chance of retaining power is to assure some measure of peace and all that goes with it-security, stability, prosperity - within his now truncated pre-state.

A model Palestinian state on the West Bank, thriving and unthreatening, would be wonderful to behold. It might even prove a precursor to a re-united Palestinian authority if its example were to prove irresistible for Palestinians in Gaza now in the grip of Hamas.

Too good to be true? Just another empty vision? But where there is no vision, to slightly emend an ancient prophet, both peoples perish.