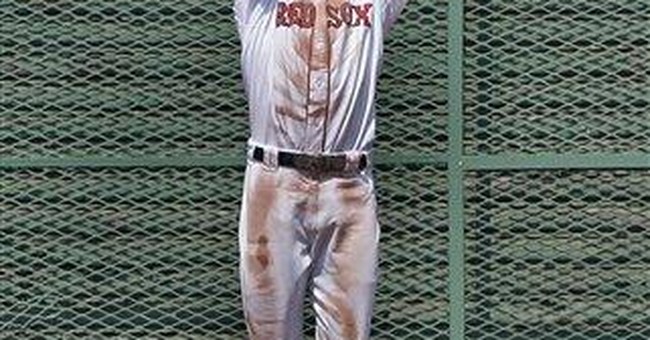 BOSTON - Contrary to what they taught us in journalism school, let's mention the unimportant thing first: the score. It was the Boston Red Sox 8, Chicago White Sox 5 in the last game of their series here at Fenway Park.

There, that's out of the way. The score is the game about as much as the map is the road, that is, not very much. You might as well look at a man's net worth at is death and try to decide whether his life was a success. The cliche turns out to be right: It's really not about whether you won or lost but how you played the game, Vince Lombardi and rabid fans to the contrary.

The antique scoreboard at Fenway, this cathedral of major league baseball,showed the home team with a comfortable lead throughout today's game. It couldn't show how the White Sox, typical of Chicago's gritty but jinxed South Side, never gave up - but could never could get it right, either.

The score can't transmit the suspense that began to mount when Chicago managed four runs in the top of the seventh and Boston had to call on one of its aces, Hideki Okajima, to quench the rally.

The score can't show the crowd of 36,000 rising to its feet in the top of the ninth as Boston's other star reliever, Jonathan Papelbon, was called inn ext. He proceeded to load the bases with none out in the ninth - some reliever! - and found himself behind in the count (2 balls, no strikes)against White Sox power hitter Jim Thome.

Only then did Papelbon get himself out of the fix he'd gotten himself into by striking out Thome (his fastball was clocked at 96 mph) and getting Paul Konerko, who's always a threat, to ground into a game-ending double play.The crowd's reaction was as much relief as jubilation. Once again the redoubtable Papelbon had saved the day, this time from himself.

Pa-pel-bon! Pa-pel-bon! the crowd chants when its hero takes the mound to put out the fire. This time it's one he started before heroically putting it out. You wouldn't be able to deduce any of that, or feel the pressure, from just the final score.

Just when does Red Sox fever strike you? When you come out of the T at Kenmore station to join the flowing mass headed for the intersection of Yawkey Way and History? No, that's just the general air of anticipation whenever the timeless clock of baseball is being wound up before a game. Not until the game itself begins, and outs and innings replace minutes and hours, will time have melted like one of Salvador Dali's clocks.

You're still in the mundane old dimension as you pass the street vendors,ticket scalpers, and program sellers. When a guard inspects my daughter's bag on the way in, it's the last reminder of the world and war outside. Then we're through the turnstiles and into the vortex.

Emily Dickinson called it the exaltation of an inland soul going to sea.Here that moment of exhilaration comes even before the first sight of the green, green field. Just before entering the stands, you hear the unmistakable sound of the ballpark organ. As Ravel said of his popular Bolero, it's not music but it's magnificent.

All is promise as we wait for the opening rituals to be observed in full on this bright, almost cool, perfect summer afternoon. The prelude to baseball games may be the last refuge of unapologetic Americana in an era when everything comes doused in irony. If your heart doesn't beat a little faster at the whole Grandma Moses panorama about to unfold, then you need to see a good cardiologist.

First the introductions, and the announcement of the official, nine-point Fenway Code of Conduct. ("1. Avoid balls in play. 2. Never trespass onto the field. 3. Drink responsibly.") All the way past No. 5 ("Watch your language") till you get to No. 9: "And of course, No Smoking (except on Yawkey Way)."

Today is Vermont Day. It always seems to be Vermont Day at Fenway when it isn't New Hampshire Day or Maine Day. Soon it's time for the Star-Spangled Banner sung by the men's choir of the First Congregational Church in Essex Junction, Vt., which sounds like a barbershop quartet multiplied by four.Then it's time for the last words of the national anthem: "Play ball!"

And so the game and the day goes, from the slow build-up to the slower emptying of the stadium after the last out. It's as though we - all 36,000of us - can't bear to leave. We'd started missing the game even before itwas over, when the shadows started creeping toward home plate like the outside, lesser world crashing the gate. Now the yellow sunlight fades in tourban orange as we file out like mourners. It is a sweet sadness, full of gratitude for what we had.