What Makes A Great Cartoonist? 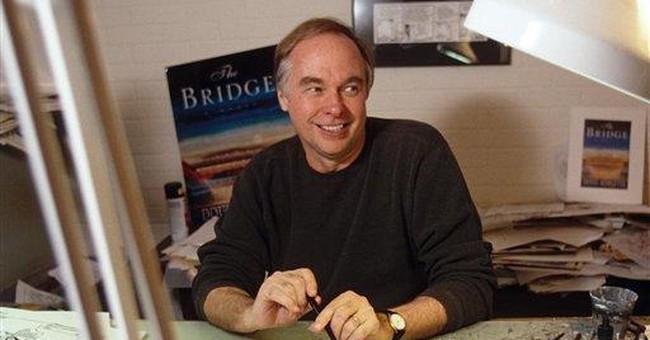 You may not recognize the name Doug Marlette, but the odds are he's made you smile.

The celebrated cartoonist was killed when a car in which he was a passenger ran off a rain-slick road in Mississippi, a state that might be summed up as the South's South.

That's a helluva note. Because it was the South that, throughout his career, Doug Marlette celebrated and lampooned, relished and ridiculed, and above all loved. The secret of his success - well, one of 'em - was that he had a sense of place. A sense of place many of us share. The man was talking, and drawing, our language.

Like the loss of another great cartoonist, adopted Southerner Jeff MacNelly back in 2000, this one really hurt.

Doug Marlette wasn't just an editorial cartoonist but a comic-strip artist ("Kudzu"), a showman (he was on his way to a high school musical based on "Kudzu" when he was killed), and a plain-as-grits good guy.

Doug Marlette knew that few weapons are more powerful than humor. And he used it with aplomb. When he was with the Tallahasee Democrat before joining the Tulsa World, he drew a cartoon that was seen around the world - and provoked about half of it. It showed a man in Arab garb driving a Ryder truck equipped with a nuclear weapon. The caption was a take-off on the anti-gas guzzler slogan, "What would Jesus drive?" It read: "What would Mohammed drive?"

The cartoon outraged the intolerant throughout the Muslim world, which, like ours, has no shortage of zealots.

But an iconoclast like Doug Marlette was an equal opportunity offender. When he was drawing cartoons for the Charlotte Observer, he caricatured Jim and Tammy Bakker, and Jerry Falwell, too, in a single cartoon. It showed Brother Falwell slithering into the Bakkers' evangelical empire after their fall, explaining: "Jim and Tammy were expelled from paradise and left me in charge."

In response, an angry caller told him: "You're a tool of Satan for that cartoon you drew."

"That's impossible," he responded. "I couldn't be a tool of Satan. The Charlotte Observer's personnel department tests for that sort of thing. Š Knight Ridder human resources has a strict policy against hiring tools of Satan."

Doug Marlette not only suffered fools, he used them as straight men.

Doug Marlette wasn't just a newspaper cartoonist but a newspaper critic in his way. In his memory, the rest of us in this business would do well to keep in mind some criticism he offered in an interview with Jeff MacNelly's daughter, Kristy Shumaker, when she interviewed him in 2003:

"We've bred this generation of Eddie Haskells, parent-pleasers, suck-ups, careerists that's hurting cartooning as well as newsrooms. Š The irony is, readers are falling away, and newspapers can't figure it out as they reward blandness, homogenize the product, dull it down and drain all the humanness out of it."

Newspapers have a lot of competition these days, and have had since radio and television preceded the Internet on the scene. But we have no more serious threat than our own, fatal craving for respectability. Especially when it swells into pomposity. Or a fearful neutrality, as if we were afraid of taking sides. Doug Marlette didn't have any problem along those lines; he was willing to offend all sides.

Here's trusting that Doug Marlette isn't resting in peace at all, but still giving the haters hell.

The loss of Doug Marlette has got me wondering, not for the first time, about what makes a great political cartoonist and why so few of them are still around.

A political cartoon ought to offer more than a quick laugh, a daily punch line, a sketched version of a Jay Leno or David Letterman monologue. A great political cartoon, like a great editorial, ought to appeal to people's own standards yet elevate those standards. Not an easy trick.

A great cartoon should spring from a common set of values, a shared culture, the way Marlette's work sprang from his Southernness, yet not be afraid of questioning that culture.

Among my own favorite practitioners of the trade would be classic cartoonists like D.R. Fitzpatrick of the old St. Louis Post-Dispatch, George Fisher of the old Arkansas Gazette, and, my favorite of favorites, Bill Mauldin of Stars and, in civilian life, the St. Louis Post-Dispatch and then the Chicago Sun-Times. Because he wasn't only a comic. He didn't just make people laugh but moved them to sigh, think, agree or disagree, mutter angrily or shout Amen, Hallelujah and Selah! He had a point of view. He had something to say, not just entertain us with.

I would've included Herblock on my list of greats if he'd stopped drawing a decade or two earlier than he did. He wound up just repeating the icons he'd made part of the American mind: Richard Nixon with 5 o'clock shadow climbing out of a sewer, The Bomb looming over all. A great artist grows; he doesn't just keep repeating his earlier work, however powerful.

There are still some cartoonists who may prove to be in Bill Mauldin's major league. The name Michael Ramirez comes to mind. Naturally the Los Angeles Times dropped him as it entered its mediocre phase, and his base is now Investor's Business Daily. But his kind of talent, and gumption, is rare.

Too many of today's political cartoonists spread themselves too thin. Talent may be limitless but not time or energy, which needs to be focused if it is to give us something more than a quick laugh. Or maybe even a view of the human condition.