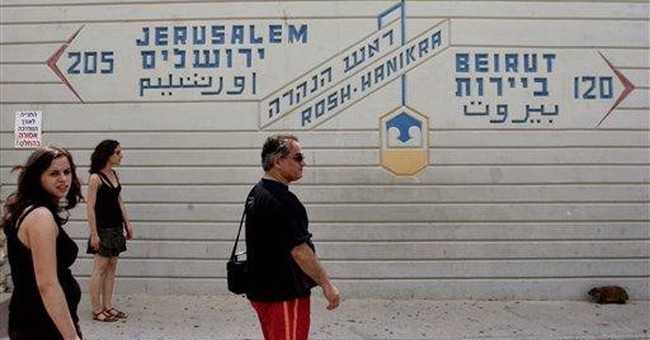 There may be something new under the sun after all. For the first time ever, the Arab League will be sending a delegation to the sovereign state it has tried to crush time and again. It must have finally dawned on the various Arab states, 22 in all, that the rising tide of terrorism in the region represents at least as great a danger to their always fragile governments as it does to Israel. And there's nothing like a common enemy to bring once-hostile nations together. Ideologies come and go; national interests remain.

The growing power and prominence of terrorist outfits like Hamas and Hezbollah, and the general arc of Shiite extremism out of Iran, will have served the cause of peace after all if Arab regimes are moved to respond by making common cause with the "Zionist entity" they once pretended didn't exist.

The way to reconcile these competing claims to a much promised land has long been clear: Divide it. This approach is now referred to as the two-state solution. In 1947, when the United Nations voted to divide the old British mandate over what was then Palestine into separate Jewish and Arab states, the solution was called Partition. But the goal has remained the same: two states living side by side in peace and prosperity, each contributing to the development of the other. That's been the glittering prospect, the impossible dream, the light at the end of the tunnel.

Unfortunately, there hasn't been a tunnel. That is, there hasn't been a diplomatic channel through which both sides could negotiate - negotiate effectively, anyway, for there have been many failed attempts. All kinds of outside interlocutors, mediators, secret messengers and peacemakers turned mischief-makers - the name Jimmy Carter springs to mind - have tried to hammer out a peace process but, time and again, it proved more process than peace. That small sliver of land on the eastern shore of the Mediterranean has always produced a lot more conflict than it could safely consume.

This time the Arab League comes bearing a peace plan instead of bellicose denunciations. This being the Middle East, birthplace of the bazaar, the Arab nations have started the bidding by demanding some preposterous concessions. But those can be haggled over later. It's not the Arab League's demands that are newsworthy - they've been made and rejected before - but that it's offering Israel what Arabdom has long withheld: peace and recognition.

In return, the Israelis would withdraw from all the territory they wound up with after the Egyptians, Syrians, Jordanians, Iraqis and the rest of the Arab world tried to wipe out the Jewish state in 1967. The result of that misadventure surprised everyone, especially Egypt's Gamal Abdel Nasser, the mastermind behind the whole bloody fiasco.

In the immediate aftermath of that Arab defeat, the Israelis proposed just such a settlement: They would hand over their conquests - well, they might have insisted on access to their holy of holies, the Temple Mount in old Jerusalem - and return to their old lines in exchange for peace and recognition.

But at the time, an Arab summit in Khartoum responded with the infamous Three NOs: No peace with Israel, no recognition of Israel and no negotiations with Israel.

Now, after all these years, the three NOs have become the three YESes, which is something to welcome. And for the Israelis to celebrate - and move to reciprocate. Quickly, before these Arab governments change their mind again.

It was never the creation of a 23rd Arab state in the world that has been the central issue in this cousins' conflict between the descendants of Ishmael and Isaac, but the existence of the single Jewish one. If its right to live is recognized, everything else could fall in place, difficult as it may be to imagine such an outcome now.

Because now the devil's in his usual place. One of the details in the Arab League's peace plan is that Israel would open its gates to all the descendants of Arab refugees who fled Israel in 1948, when an attempt was made to smother the newborn Jewish state in its infancy and the Arabs suffered another defeat. What the Arab nations could not do in war after war - overwhelm the Israelis - would now be accomplished by demography.

But like Israel's final borders, this demand, too, is surely negotiable. At least since Father Abraham bought the Cave at Machpelah (Genesis, Chapter 23) in order to bury his dead, elaborate negotiations have been the essence of peace, or at least co-existence, in that part of the world. It's a tradition worth reviving.

The unanswered question - well, the big one of many - is whom the Israelis are supposed to negotiate with. At the moment, the nascent Palestinian state has been divided between Hamas diehards in Gaza and Mahmoud Abbas' remnant of a Palestinian proto-government on the West Bank. Until the Palestinians' sputtering civil war ends, it won't be clear who represents that long-suffering people.

But any sign of peace from any source, including an umbrella organization like the Arab League, which has never been more than a nominal alliance, is to be hailed. For in order for negotiations to succeed, they must first be opened. Just as the first step toward peace is the hope that it can be achieved. And it's important, it's essential, that hope be kept alive.