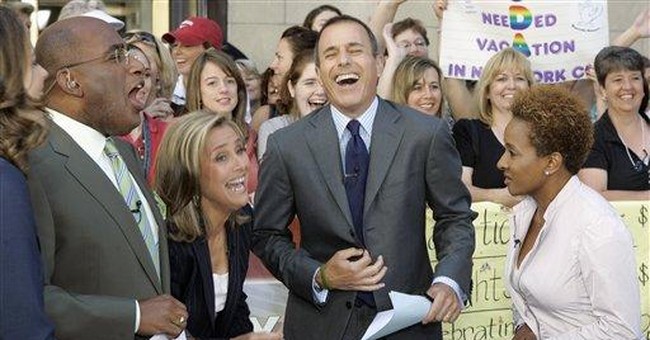 Once upon a time in a faraway land known as the Fifties, political opinion on the television networks, all three of them, ran the gamut from left to center-left.

ABC, NBC and CBS were the holy trinity of news in an age when The Tube was the dominant medium. Any other viewpoint was considered less than respectable, or just ignored. You could choose any of Big Three's three evening news broadcasts to give you the same general slant on things.

Walter Cronkite on CBS was called the most trusted man in America, and doubtless he was, for though he had imitators, he had no real competition.

How things have changed. Mr. Cronkite tried writing a syndicated column not long ago and it fell flat. Because in this age of 24/7 television news coverage, radio talk shows all over the dial, and the ubiquitous Internet with its multiplicity of bloggers, one for every taste and many with no taste at all, there is no shortage of different viewpoints to choose from.

But in the Age of Cronkite, political commentary had its effective limits, all the more effective for appearing to have none. Anything that went beyond a kind of NPR/New York Times soft-liberalism, whether to the right or left, could expect to be considered radical, lunatic fringe, extreme. Extreme was about the most damning judgment one could make about a political viewpoint, regardless of its merits. It was not the substance of an opinion that might deny it serious consideration, but its diverging from the carefully channeled mainstream. Not that viewers had to settle for the dulcet tones of CBS' Walter Cronkite, so resonant with avuncular authority. There was also the worldly delivery of NBC's Huntley and Brinkley, who tended to merge into one sophisticated commentator. The secret to editorializing the news in those days, and maybe today, is to do so subtly, transmitting the subtext: This is what the best people think. And so should you. It wasn't so much snob appeal that made Huntley Brinkley so attractive, but their general air. It was as if they were taking you into their confidence, like some well-dressed passenger you might come across in the club car on the 20th Century Limited. If the reference is dated, so is their nice, gliberal and essentially unchallenged version of the news.

When the Big Three networks still ruled, political opinion on the airwaves was practically as constrained as it was in the old Soviet Union. Of course there was a difference: Our way was more effective. Fashion is a far more powerful arbiter of society than mere decree. And when fashion is reinforced by decree, you have the conformity of the 1950s.

In the finest tradition of Newspeak, the unfair law that backed up this artificial national consensus was called, of course, the Fairness Doctrine. It wasn't a statute but a regulation adopted by the Federal Communications Commission in 1949. On the surface, it seemed the fairest thing in the world. Its operating principle: Any opinion expressed on-air except the most innocuous was open to rebuttal by those who might disagree.

But soon it dawned on the owners of radio and television stations that strong opinions would invite strong rebuttals, and their stations might wind up filling hours of valuable air time with point-and-counterpoint social and political commentary - instead of something as rewarding as advertising. And that the best way to avoid such costly rebuttals was to avoid voicing any strong opinions at all.

The result: It wasn't just the entertainment on television that came to resemble a wasteland but the news programs.

Eventually even the courts caught on to what was happening, and noted the disparity between the pap on the air and what the founders had had in mind when they wrote the First Amendment. By 1974, in a unanimous opinion, the U.S. Supreme Court reached the obvious conclusion: "A government-enforced right of access inevitably dampens the vigor and limits the variety of public debate." The unfair Fairness Doctrine was junked in 1987.

Today a wild profusion of opinions has sprouted up on the airwaves, but there are those who would like to tame this rambunctious forum, and return to the old conformity that left their unchallenged. It's so much easier to suppress opposition than have to respond it.

Oh, for the good old days when the natives weren't quite so restless! And what better way to return to that golden age than to revive the Fairness Doctrine?

But it's too late. Dead is dead. Americans have become accustomed to the wide, wild range of opinion out there, which is now spilling out in every direction on the Internet. There is no turning back.

As soon as senators like Dianne Feinstein, Dick Durbin and John Kerry began suggesting that it was time to resurrect the Fairness Doctrine, the reaction was immediate: The U.S. House of Representatives quickly passed a bill, by the impressive margin of 309 to 115, forbidding the FCC to bring the monster back.

There is something about freedom of expression, once tasted, that creates a thirst for more. The best response to an idea one detests is not to suppress it, but to offer a better idea. It's only fair.