The Elusive Quality We Call Justice 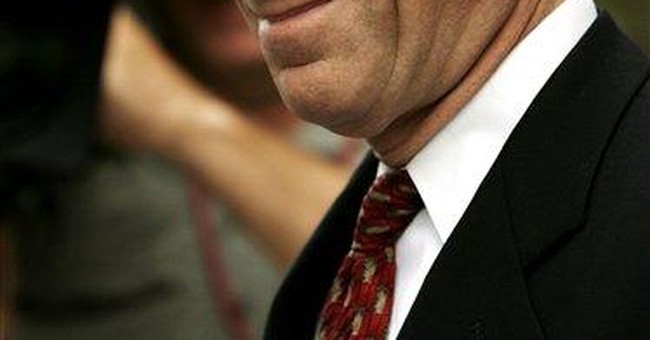 The best of the possible is quite different from the best. In the best of worlds, or at least a better one, an appellate court would have stayed the jail sentence of I. Lewis Libby until his appeal was complete after he'd been convicted of perjury and obstruction of justice, or maybe only of an inexact memory.

As an aide to an unpopular vice president in an unpopular administration during an increasingly unpopular war, Scooter Libby was deeply involved in the late and continuing unpleasantness over the war's rationale. When called on to testify about his role in one of the numerous controversies the war has spawned, this one involving a CIA employee and her husband, Mr. Libby's testimony was confusing and contradictory.

Whether that testimony was also perjury, as a judge and jury decided, or just the result of a jangled memory, as he claimed, an appellate court should have been allowed to fully consider his plea before Scooter Libby heard the cell door slam behind him. In his case, justice delayed would have been justice done.

Whatever partisan and other emotions this commutation will stir, a sentence of 30 months in jail in addition to a $250,000 fine makes a striking contrast with the treatment meted out - well, kindly accorded - a presidential aide in another administration, the one headed by the Hon. William J. Clinton.

Remember Sandy Berger? He snuck classified documents out of the National Archives, destroyed some of them and tried to dissemble about it. Thanks to a plea bargain, he didn't spend a day in jail. Scooter Libby wasn't even going to be allowed to complete his appeal before being jailed.

Nobody ever said - well, nobody who ever thought about it would say - that the world is fair. But sometimes the unfairness of it is too much for a president to ignore. At least not a president who is willing to take even more heat to do what he thinks is right in a highly politicized case in which no real justice can be done right now if ever.

If only the appellate court had granted Mr. Libby's plea for a stay Š but if-onlys don't count in a world of pressing realities where perfection is not to be attained. Justice, justice, said the prophet, thou shalt pursue. Even when there is no achieving it, and the best that can be done is a hasty, partial attempt at it.

The president's commutation of an old and loyal aide's severe sentence will doubtless be severely criticized itself. And not just by those who've always wanted Scooter Libby, together with his boss Dick Cheney, frog-marched out of the White House. Also among the critics will be those friends and/or admirers of Mr. Libby who will say the president didn't go far enough - and should have pardoned him outright some time ago.

An immediate sample of the roasting this already well-done president will now receive came from the still new Speaker of the House Nancy Pelosi, who in her typically temperate way, said the president's commutation shows that he "condones criminal conduct."

How's that, to quote another prophet's admonition, for seeking justice, loving mercy and walking humbly?

Mrs. Pelosi's is the kind of comment that a balanced decision to commute, not pardon, a disputed sentence was bound to draw in times like these, which are not the best for thoughtful judgment. Hell hath no fury like a partisan scorned.

It took a certain courage to commute this sentence, and for that decision the president deserves a certain respect even from those who disagree with it. But that may be too much to expect from the usual, vehement quarters.

At times of heated political passion, nothing may rile some folks like an act of necessarily imperfect justice.