Fifty Ways to Beat the Heat 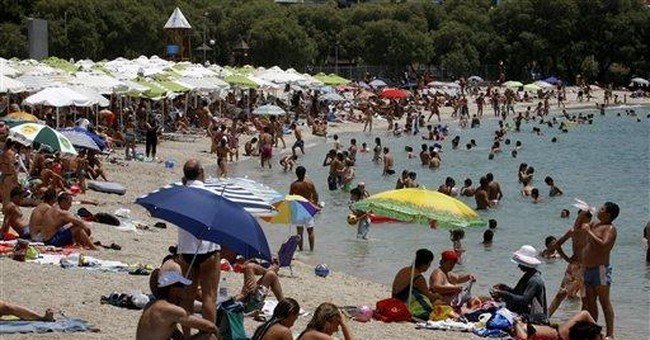 With the temperature climbing, and the good old summertime about to cover the country like a horse blanket, it's definitely time to update my annual list of heat-beaters.

Feel free to clip and save, mix and match, and add your own favorites:

1. Forget talk radio and 24/7 television news. Switch to the classical station. Or your collection of old swing records. Watch an old movie (preferably one set in a cold climate) instead of "The O'Reilly Factor." Try not to think about Alberto Gonzales or Karl Rove, Dick Cheney or Chris Matthews, Charles Schumer or the Clintons, either one. Cool down the mind.

2. Delete all unwanted e-mails without opening them. Especially if they're from types who are always a little hot under the collar anyway. But if you must open them, under no circumstances reply; it only encourages 'em. You've got more productive things to do with your time, like relaxing in air-conditioned comfort.

3. Recall the lightest, most elegant, interesting dessert you ever had. (I nominate zabaglione over half a perfect peach.) Or just have a piece of cold watermelon. With a little salt.

4. Make some fresh lemonade. Or as Robert Benchley once advised, get out of those wet clothes and into a dry martini.

5. Think on the pure, crystalline beauty of the Pythagorean Theorem.

6. Don't try to figure out the infield fly rule one more time; just settle back and watch the game. Linger over the replays in slow motion. Don't move too fast yourself.

7. Avoid watching sit-coms, playing rock'n'roll, listening to TV shout shows, arguing politics, worrying about the future or regretting the past. "Don't look back. Something might be gaining on you."-Satchel Paige. Epictetus the Stoic might have said something like that, too, but not half so well.

8. Decorate with green, leafy things, but not kudzu.

9. Take siestas; arrange to live in the early morning and after twilight.

10. Don't hurry back, or anywhere else. "Nothing can be more useful to a man than a determination not to be hurried."-Henry David Thoreau. He must have been a Southerner at heart.

15. Sit on the front porch. In a swing. Under a fan. Especially if it's glassed-in, air-conditioned, in the shade, and surrounded by cool greenery.

17. Take a thimble-sized cup of hot soup before supper to whet the appetite.

19. Go fishing. Early in the day. Without fancy lures, rod 'n' reel, and other impedimenta. Pack a picnic breakfast, choose an unfrequented spot off the beaten path, lie down, breathe deep, and clear the mind. ("Many go fishing all their lives without knowing that it is not fish they are after."-Thoreau again.)

20. Have a tall cold one. With a hot dog. At a minor league ballpark. Luxuriate in the nostalgia. Grab a handful of it at the Arkansas Travelers' little jewel of a new ballpark in beautiful downtown attractive North Little Rock, Ark. See what baseball used to be like and still is. Don't get involved in who's winning or losing. Just root for the team in the field. That way, you avoid partisan passions, which can grow heated.

22. Wear white and play Great Gatsby to beat the band. Or at least seersucker.

23. Think about exercising. But only think about it.

26. Contemplate the coming of the next ice age.

27. Read up on the culture of the Eskimo.

28. Plan an expedition to the South Pole. Read a biography of Shackleton.

29. Stock up on watercress and cucumbers.

30. Carry a handkerchief. A big one. A bandana. Maybe two. Mop your brow even when it doesn't need mopping.

31. Walk on the shady side of the street. Whoever designed those treeless parking lots around shopping malls should have to park in one. Every day. In these latitudes. In August. Let the punishment fit the crime.

32. Remember Paige's Law No.2: "Step lightly; do not jar the inner harmonies."

33. Read "Gorky Park" or some other detective story set in a cold climate. Or check out Howard Hawks' arctic and antic sci-fi classic, "The Thing From Another World." Rent any old horror movie that makes you shiver/laugh. Listen to Abbott and Costello try to figure out who's on first, and what's on second. (I don't know's on third.)

34. Send the kids to see the grandparents.

35. Grandparents: Send 'em back after 24 hours, then take a week off by yourselves. You deserve it. You've already raised yours.

37. Go for a walk at dawn, preferably without having to get up at an early hour.

40. Don't fret. Why worry about things till you have to? You may never have to.

42. Wonder about the Laplanders.

44. Think on not having to put up the Christmas decorations, cook the turkey or build a roaring fire.

45. Smile in the sure knowledge that the damper on your fireplace is closed.

47. Consult the atlas for the location of Novaya Zemlya and the Bering Strait. Read about penguin population patterns. Study up on the Aurora Borealis.

50. Take the columnists with an extra grain of salt.