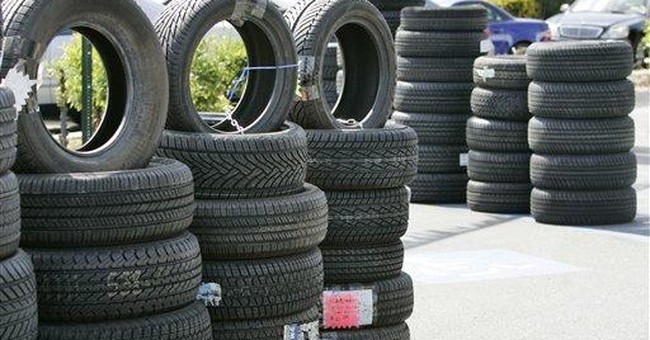 This year we had two springs here in Arkansas, one before and one after the Easter frost. Which means we had two winters, too, even if the second didn't last more than 24 hours.

It happens from time to time -- a pretty much tomato less tomato festival.

Arkansas tomatoes just have a mind of their own, or at least a growing season of their own. It's one of the quirks of living in a state with four seasons. At least.

The seasonal change here in The Wonder State is particularly tricky when it's winter-to-spring. Winter sometimes refuses to go quietly. But it makes life interesting. What could be more boring than having the same, perfectly boring season all year 'round?

It was a fellow columnist here in Arkansas, Richard Allin, who once suggested the perfect name for a spring festival in these contrary parts:The annual Frozen Daffodil and Snow Tire Festival. It never caught on, but it should have. It still could. Maybe the local tire dealer and florist insome Mayberry-like town here abouts could sponsor it jointly.

An annual daffodil-and-snow-tire festival might not have the panache of another Arkansas festival, Toad Suck Daze, but it would reflect the fickle realities of springtime in these latitudes.

This year, like the spring foliage in northern Arkansas, the tomato crop had to start all over again. Not that our farmers enjoy it, but they are used to that kind of thing. Or at least willing to put up with it, for there's noreward for persistence so succulent as a perfect, vine-ripened Arkansas tomato.

Even when winter makes a 24-hour comeback, tomatoes delayed need not mean tomatoes denied. And they're worth the wait, especially if they're Bradley County pinks. Every year many of us in Arkansas await their appearance like a Frenchman anticipating that year's Beaujolais.

Wine tastings are pleasant enough events, even if they verge on the pretentious. Scotch tastings are better, especially when they get around to the single malts from the Isle of Islay with their smoky, peaty flavors. But best of all would be a tomato tasting at the height of the season.

One day I'd like to work my way through all the great tomato varieties - one thin slice at a time. There'd be only the occasional salty cracker on hand to cleanse the palate between the Big Rainbow, White Wonder, Red Plum, Evergreen, Carmello, Golden Jubilee, Ultra Pink, Ultra Boy, Red Gold Stripe, Early Cascade, Red Peach.

It would be hard to wait till I got to Arkansas' own distinctive variety, which comes into perfection only in the vicinity of Warren, Ark. - the Bradley County pink. Maybe it's something in the soil or the weather that does it. Or just the sheer grace of God. But the Bradley pink has never been duplicated elsewhere - the irregular, even ugly shape, the perfect heft, the way it fits in your hand as if custom-made for your palm, its sharp yet pleasant taste.  It's the fresh taste of summer in a blushing skin.

Whatever the explanation for their pastel color, tenderness yet firmness,and their piquant, distinctive flavor, Bradleys would be my favorite variety. They're like some fine local vintage maybe known abroad butdefinitley cherished at home. Bradleys may not travel well, but they taste best. Perhaps because, like all things truly Southern, they have a sense of place. And time.

One taste and you're carried back to the years before those reddish, mass-produced little softballs made for shipping, not eating, were sold in supermarkets under the assumed name of tomato.

In this all-too-modern age, innocent American consumers who've grown up on instant everything may never have tasted a real tomato. Instead they've been fed those simulacra that come in cellophane and taste about the same.

Now the first Bradleys have started to show up at last. It's too early to pronounce judgment on this year's crop. One shouldn't rush into thesematters, skip extensive tasting, and risk an early, in cautious opinion. Time is the essence of both a summer tomato and its enjoyment. There's no sense rushing a delight. So I can wait for that first, perfect tomato of the season. I know it's out there. I can almost hear it calling. I'm sure it's a Bradley County pink.

Donald Trump Should Not Be the 2024 Republican Candidate. Here's Who Should Be.
Townhall
Biden welcomes 'undocumented Americans' to WH, meanwhile FBI warns citizens of prison time for fake vaccination cards
Twitchy
Report: Biden Snapping and Losing It in Profanity Laced Tirades at Staff
Redstate
Legacy Media Finally Calls Out the 'Experts' for Their COVID-19 Misrepresentations
PJ Media