Man of the Century 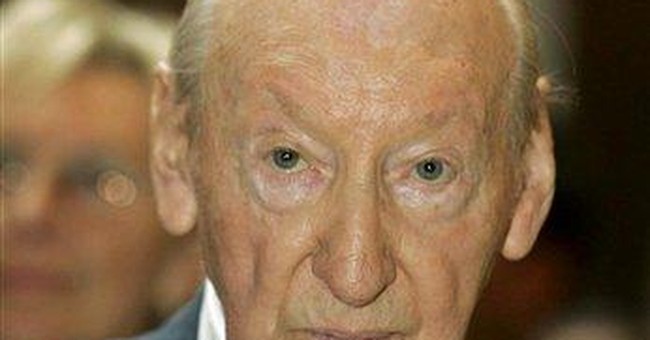 Kurt Waldheim is dead. It says so in the New York Times, and doubtless in all the other official records-from his death certificate to his extensive resume. His papers were always in order, his career well documented: law degree, University of Vienna; a string of diplomatic posts culminating in his appointment as Austria's foreign minister; secretary-general of the United Nations; president of Austria.

There was no need to go into detail and mention his service in the Balkans as an intelligence officer with the Wehrmacht's infamous 714th Infantry Division. Together with its Croatian accomplices, the 714th conducted a murderous campaign against partisans in and around Kozara in western Bosnia. A talented paper-pusher even then, Lt. Waldheim also saw service in Montenegro and Macedonia, where he did similar work.

Then there was his time in Greece at Salonika. Its Jewish community of some 60,000 souls was "relocated" to Auschwitz, ending a history that went back to the time Jews fled there to escape the Spanish Inquisition. Kurt Waldheim would later say he was stationed on a hill outside town at the time, and never saw anything out of the ordinary. The disappearance of a third of the city's population must have been hard to miss, but maybe he thought all those boxcars were a commuter line.

That whole chapter of his life never made it into Herr Dr. Waldheim's curriculum vitae. For public purposes, the story was that Lt. Waldheim had been wounded on the Russian front in 1942, and then sent back home to get his post-graduate degree. His service in the Balkans was blanked out. A modest man, he never mentioned that his name was inscribed on his division's honor roll, or the decoration he'd received from Croatia's fascist regime. Why call attention to himself?

Allied intelligence agencies knew about Kurt Waldheim's involvement in those genocidal campaigns. So did the Soviets. He even made a list of suspected war criminals, nominated by the Yugoslavs. But that distinction was lost in the postwar confusion. Besides, an experienced diplomat might be of some utility to all sides in the Cold War. Why not let bygones be bygones? Soon enough, Marshal Tito would make Dr. Waldheim a member of the Order of the Grand Cross of the Yugoslav Flag.

It wasn't until decades later that a history professor at the University of South Carolina - Robert E. Herzstein - began poking around in the archives, and found evidence of Kurt Waldheim's extensive service in the Balkan killing fields. At first Dr. Waldheim couldn't remember being anywhere near there. Then he claimed he was only as a translator, not an intelligence officer. Later, when his memory was refreshed, he couldn't remember witnessing anything irregular.

Nor was there anything in the archives to connect the distinguished diplomat to those atrocities, at least not until a "W" for Waldheim appeared on an interrogation report of a British commando who'd been executed. Lt. Waldheim also signed off on the text of a propaganda leaflet dropped behind Russian lines: "Enough of the Jewish war, kill the Jews, come over."

But that was just your standard anti-Semitic leaflet. And shooting Allied prisoners caught behind the German lines wasn't unusual. There was nothing personal about any of it. There never was with Kurt Waldheim; impersonality was his trademark, bureaucratic routine his protective coloration.

Kurt Waldheim played a purely clerical role in those atrocities. He might as well have been a typewriter for all the soul the job required. Just as later, as secretary-general of the United Nations, he would stand by when the General Assembly passed its infamous Zionism-Is-Racism resolution.

When the Israelis pulled off their daring rescue mission at Entebbe on July 4, 1976, saving a planeload of passengers who'd been hijacked to Idi Amin's murderous domain, it was Secretary General Waldheim who objected that the raid constituted "a serious violation of the national sovereignty of a United Nations member nation."

Dr. Waldheim was always a stickler for procedure. The man was no hater; he was a bureaucrat. Terrible things might be done by the Wehrmacht, or approved by the UN, but he only worked there. He just saw to it that the paperwork was in order. Whatever crimes he made possible, nobody ever accused Kurt Waldheim of being less than professional.

Hannah Arendt, in her memorable study of Adolf Eichmann, had a term for this depersonalized modern phenomenon: the banality of evil. Pre-20th century hatred could be a messy, disorganized thing. Modern technology and organization made it an industrial science.

A war criminal? Kurt Waldheim only signed things in his official capacity; he never did them. Later he would always seem perplexed, and not a little irritated, that some thought he should be held responsible for every little scrap of paper he'd ever initialed. His accusers were looking for blood on his hands and all they ever found was ink. He would die in bed. At 88.

What is to be said of Kurt Waldheim on his death? One might as well try to judge a machine. And yet attention must be paid. Because large organizations-armies, governments, corporations, international agencies-have no conscience of their own. They must depend on individuals to supply it. And when an individual with some administrative skill not only follows orders, but refines and processes and initials them, making sure they will prove highly effective, there is no limit to the evil that can be accomplished.