The Soprano Effect: The Decline of TV Masterpieces 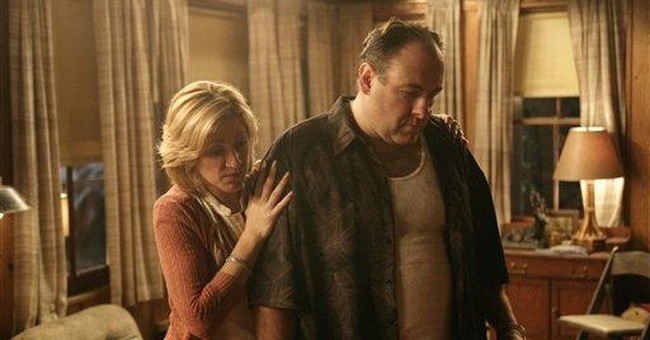 In February of 1946, George Orwell published another of his essays in the best British tradition. It was civilized, thoughtful and not without humor. It displayed a sense of the past and put the present in perspective. It was about murder.

More exactly, to quote the title of the essay, it was about "The Decline of the English Murder." In it, Orwell looked back fondly on pre-war days when, of a Sunday afternoon, you could put your feet up after a sumptuous dinner (surely roast beef and Yorkshire pudding), open the paper, and read a really good murder story.

By really good, Orwell explained, the crime would have to have all the traditional elements: class, cunning and conscience - that is, the murderer's struggle with his own. It wouldn't be just a detective story but something of a morality tale.

A proper murderer, said Orwell, should have a certain social status, and his crime show some ingenuity; he would be a respectable solicitor or clergyman, his preferred means a slow-working poison. Most important, the story should include some "tiny, unforeseeable detail" that inevitably trips up the killer.

So what TV series has entranced this country Sunday night after Sunday night, season after season? That's a rhetorical question. "The Sopranos," of course.

The New York Times, our accepted arbiter of good (upper-middlebrow American) taste, hailed it as the "greatest drama ever created for television."

The Wall Street Journal's estimable Peggy Noonan spared no superlative. "The Sopranos," she declared, "wasn't only a great show or even a classic. It was a masterpiece, and its end Sunday night is an epochal event. With it goes an era, a time."

Goodness. I would never have known all that. I still don't. And yet Miss Noonan's voice is not one easily dismissed. She was capable of producing some of the most eloquent of presidential phrases so long as she had Ronald Reagan to deliver them. And she remains a font of socio-political insights if the reader will trouble to entangle them from the occasional - OK, regular - portentousness with which she delivers them.

In the build-up to the Sopranos' farewell performance, Peggy Noonan hit an elegiac note - and held it for 1,162 words. One expected her to declare at the end that the show now belongs, not to the DVD market, but to the ages. It was as if Shakespeare had just ended his run at the Globe, or Sophocles closed out his Theban trilogy.

"The Sopranos" a masterpiece? An epochal event? The End of an Era? The show ended Sunday night - or at least came to a close - not with a bang but a blackout. Not exactly Desdemona meeting her demise at Othello's jealous hands.

James Gandolfini was certainly watchable as Tony Soprano. He played his character as a nice mix of family man and criminal menace, a combo with some innate comic appeal but scarcely the stuff of tragedy. One might as well speak of the tragic art of Chester Gould's "Dick Tracy."

As for Edie Falco's homey Carmela, what's not to like? She's everybody's sister-in-law from New Jersey. But the end of an epoch? Even as gangster art, this didn't rise to the level of "The Godfather" movies.

George Orwell had a feel for a national culture, its vulgarization and how together the two said much about the tenor of his times and his society. American commentators now present the vulgarization as the culture. All culture becomes Pop Culture; the term itself becomes a tautology.

Peggy Noonan did recognize that there have been some real masterpieces on television. "I, Claudius," for example was "simply, sublime." So was "Upstairs, Downstairs." Those choices would be hard to argue with. I'd nominate "The Forsyte Saga," too - both productions, early and late, black-and-white and, years later, in color.

But "The Sopranos"? It was more on the level of the mainly dysfunctional Loud Family, which was an embarrassing kind of real-life documentary back in the early, awful '70s. (That was before The Loud Family became the name of a pop/rock band.)

Officially, that serial was known as "An American Family," and it had some of the same voyeuristic appeal as the fictive Sopranos, only with a grainy cinéma vérité feel. But the story of the Louds had something at its heart, or at least center, that the Sopranos never grasped or even reached for - a kind of authenticity, however distorted by the television cameras that followed its stars/victims around without mercy. No doubt there were those genuinely moved by the Sopranos - apparently by the millions. It may please them to think of Tony as a tragic figure, if one placed in a setting different from the classical or Shakespearean drama. Much like Arthur Miller's Willy Loman in "Death of a Salesman." But on balance, as an exercise in art or at least wit, I'd take "The Simpsons." Maybe the best we can do in our quest for the spiritual these days is, much like Tony Soprano, consult some monotone neighborhood shrink. After all, ours is The Therapeutic Society. So maybe "The Sopranos" is indeed our masterpiece, our contemporary "Tempest," or at least "Great Gatsby" - the best we can do. If so, that says much more about us than about masterpieces.