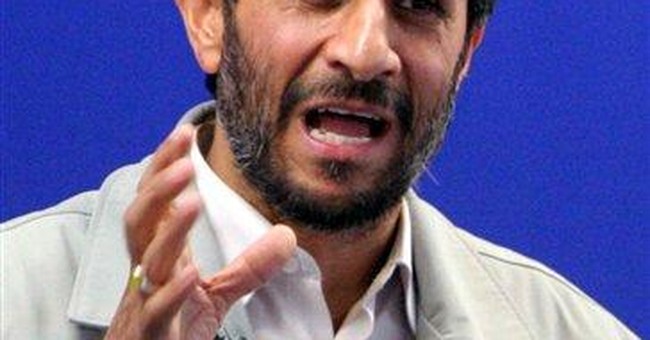 Hillel Halkin, the prolific commentator on all things Israeli, let the cat out of the bag - make that the tiger - in the current issue of Commentary.

In a dispatch that would have made Jeremiah look like a cock-eyed optimist, Mr. Halkin went down the list of existential threats facing the Jewish state and the conclusion was inescapable:

By the end of his article - "If Israel Ceased to Exist" - it's clear there's not much "if" about it.

In addition to all the usual clear and increasingly present dangers to Israel's existence, there now looms Iran's steadily developing nuclear program. Iran's president, the incessant Mahmoud Ahmadinejad, has made his policy toward Israel perfectly clear: Wipe it off the map.

And soon enough, if the world keeps dithering, he'll have the nuclear means to do it. Let this much be said for Iran's firebrand-in-chief: He's an open book, namely Mein Kampf.

Not bloody likely. To quote Bernard Lewis, who's spent a lifetime or two immersed in the study of the Middle East: "MAD, mutual assured destruction, (worked) right through the cold war. Both sides had nuclear weapons. Neither side used them, because both sides knew the other would retaliate in kind. This will not work with a religious fanatic (like Iran's Ahmedinejad). For him, mutual assured destruction is not a deterrent, it is an inducement." A radioactive Middle East would be the fulfillment of his apocalyptic vision.

Of course there have been other, more reasonable voices out of Teheran. To quote the nuclear calculus of the Ayatollah Rafsanjani: "If the day comes when the world of Islam is equipped with the arms Israel has in (its) possession, application of an atomic bomb would not leave anything in Israel, but the same thing would just produce damages in the Muslim world."

That is, millions might be vaporized elsewhere, but it would be worth it to obliterate the Jewish state.

And that's an Iranian moderate speaking.

Nor did Mr. Halkin, a thorough type, neglect to mention other threats to Israel's continued existence. For example:

-The wall the Israelis built to ward off suicide attacks may have proven remarkably effective, but what happens once a terrorist outfit gets its hand on a nuclear bomb? It need only sneak one into Israel one time and it's The End.

-Or the Arab states surrounding Israel could once again achieve a preponderance of power and threaten Israel's existence, just as they did in 1948, in 1967, in 1973. They only have to win one war to end the whole, unrealistic Zionist experiment.

-Then there are Hamas in Gaza and Hezbollah in Lebanon. The missiles are already dropping on Sderot almost daily - the Israeli town just across the border from Gaza. And last year's war in Lebanon demonstrated how vulnerable the Israelis are to Katyushas from that quarter. How long before they descend again?

-But even if none of those potential disasters materialize, there is always the demographic bomb. As Hillel Halkin points out, Israel's Arab population is growing far faster than its Jewish one. ("Israel's Jewish majority, whose ratio to its Arab minority was 10-to-1 in the 1950s and now stands at 4-to-1, will continue to shrink, almost certainly to 3-to-1 and possibly well-beyond . . ." Till slowly Israel's Jews, like Lebanon's Christians, find themselves outnumbered, beleaguered, and engulfed in sporadic civil war.

In short, by any rational analysis of all the factors in play, Israel is doomed.

Which is why the 40th anniversary of the Six Day War in 1967 has come at a propitious time. If Israel's position is precarious now, it seemed hopeless in the days leading up to that war.

Back then, the enemies that encircled Israel had the full support of a world power: the Soviet Union, which had spent the previous two decades pouring weapons into the Arab world-an estimated $2 billion worth.

On May 22, 1967, under the charismatic Gamal Abdel Nasser, Egypt blockaded the Straits of Tiran, having already kicked the UN's peacekeepers out of their posts and moved its armored columns into Sinai, where they were poised to overwhelm Israeli defenses. All was set for Colonel Nasser's "war of annihilation." The Egyptians would be joined in that war by the Syrians, the Jordanians, the Iraqis, and contingents from all across the Arab world - from Morocco to Saudi Arabia.

Their objective? Iraq's president at the time, Abdur Rahman Aref, minced no words: "The existence of Israel is an error which must be rectified. This is our opportunity to wipe out the ignominy which has been with us since 1948. Our goal is clear - to wipe Israel off the map." The final solution to the Israeli problem was at hand.

Israel mobilized its forces and waited for the United States, or the United Nations, to break the blockade and end the threat to her existence. And waited and waited. Israeli forces, which had been mobilized for agonizing weeks, were compressed like a coil within the country's vulnerable borders and, on June 4, 1967, they sprang into action.

The rest was history. Map-changing history. Israel not only survived but triumphed. Six days later, it had created a new Middle East.

Six years later, Israel's existence would hang in the balance again, this time in the Yom Kippur War. Once again it was doomed. Once again it somehow survived. For no rational reason.

If today's threats to Israel's survival sound familiar, maybe that's because they are. Once again, Israel is doomed. Once again, it doesn't seem aware that it is. It's all enough to bring back an old saying I first heard many a crisis ago: "You don't have to be crazy to be a Zionist, but it helps."