Remember the Living, Too 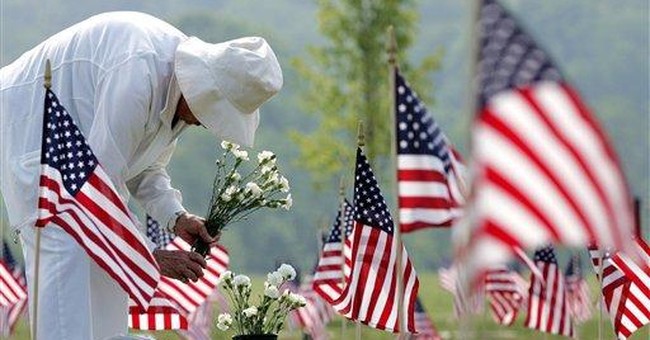 They are beyond it all now, they who went down to the sea in ships and found themselves in peril on the sea. They are beyond the acrid smoke and heart-stopping fear, the calm courage and wild rage, the sweetness of life, the sorrow and pity of its loss.

We remember them now for our sake, not theirs. The annual rites, the little flags fluttering in the breeze, the expressions of vainglory that here and there smudges the scene. All of this is for us, those of us who feel we must do something, feel something, today. For decency's sake. For gratitude's sake.

So we pause today in their wake, and rest under the shade of the trees, thinking of those who have already crossed that river. Far away from today's battlefields, at an uneasy remove, we taste the fragile peace at home, and listen to the forgetful wind over the graves. The wind Alan Tate took notice of in his ode to the Confederate dead:

Row after row with strict impunity
The headstones yield their names to the element,
The wind whirrs without recollection;
In the riven troughs the splayed leaves
Pile up, of nature the casual sacrament
To the seasonal eternity of death.

How restful those lines are, as restful as emotion recollected in tranquility. But there is more to poetry than that definition of it. There is the kind of poetry that breaks through tranquility. Like Randall Jarrell's few lines on "The Death of the Ball Turret Gunner":

From my mother's sleep I fell into the State,
And I hunched in its belly till my wet fur froze.
Six miles from earth, loosed from its dream of life,
I woke to black flak and the nightmare fighters.
When I died they washed me out of the turret with a hose.

That is war, too, man's oldest game, instinct and perversion. Do not turn away, but look. Stare. This is the price of our forgetful freedom.

There is nothing we can do for the dead now, but there is much we can do for the living. We can ask where they are, and how they fare, and see that they, and their families, are cared for. And when they are stacked in hospitals like so much cordwood, put out of sight like something indecent, we can demand more than a few showy dismissals of those who were supposed to be in charge.

We can ask, we can demand to know, what is being done for them and theirs. Now. For people do not live in some abstract realm - like the past or in politicians' speeches or on the television screen - but in the here and very now. In waiting rooms. In hospital wards. In veterans' homes.

Let this be a memorial day for the living, too. And let us live it, too. For today is also a day for family picnics and block parties, for good times as well as solemn rituals, a day to make the most of.

Today's mix of joy and sorrow, the quick and the dead, the grief and pride - it is all as it should be. Life is to be celebrated even as we remember the dead.

It is a day for laughter. Laughter is a better memorial than tears. It is the ordinary sounds - of children at play, of families uniting, of old stories retold - that are the best memorial. For it is the ordinary joys of freedom, not the grandiloquent ideals, that generations sacrificed to assure. So that Americans can walk the way we do - openly, freely, unafraid, even blessedly unaware. So that we can look one another in the eye and say what we think. So that any man can look his boss in the eye and tell him to go to hell. And any woman do the same. So we can strike roots where we are or light out for the territories. For this is a big country, and all of it is still the land of opportunity. This is the land where freedom grows. This is its native soil, its natural habitat. It thrives here. But not, as this day reminds, without sacrifice.